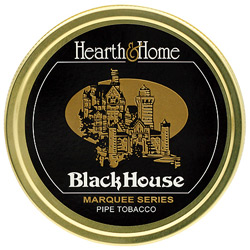 It’s almost “that time” of the year. Good, good: you caught my sardonic inflection there. I can almost smell it from here, the blissful sprawl of over-eating (and cooking) things a semi health-conscious fella like myself should not, the swimmy-headed relief of warm toddies, good wine, and neat whiskies, and the wafts of Latakia. The leaves have been raked and the blankets pulled out, with recipes and cookbooks being considered. It’s a ritual many of us go through each year, married or single, family or solo. Even if we put on a good front, I believe very few of us actively enjoy, at least not in its entirety, the thought of chaos in both the home and places of ill-shopping repute. For at least a month, if not two, there’s the need to escape being festooned in garish colors, assaulting spice smells, screeching from children and crazy kinfolk. …

…which brings me to Hearth & Home’s “Black House.” A lot of hubbub surrounded this tobacco when it first came out–I know, I read a lot of the cynical debates and wild cheers of “Seven Fifty-Nine!” which rang from the digital bell towers of the Internet some years ago. I was just starting to come into my own as far as pipes were concerned at that point. I think I bought one tin and was given another, as both are stamped from about that long ago. The tins read:

“This blend is a tribute to a great tobacco of the past. Made for a 2011 contest, it was judged to be the closest overall to the dark Balkan-type mixture it was designed to emulate. We hope you enjoy the memory. Russ Ouelette, blender.”

I cannot say for certain what the Sobranie 759 Balkan mixture was all
about–I never smoked it. I’m damned glad in a sense, because I really missed out according to the happy codgers out there. Once again it left me not yearning and pining for something that will never exist again, with everything paling in comparison, and I am free to use my senses rather than a foggy abstract to figure out what exactly is in front of me. No reference point means no expectations one way or the other. If H&H’s Black House is indeed the closest thing to what the younger generations of pipe smokers only can hear about anecdotally, I should be in for a real treat. 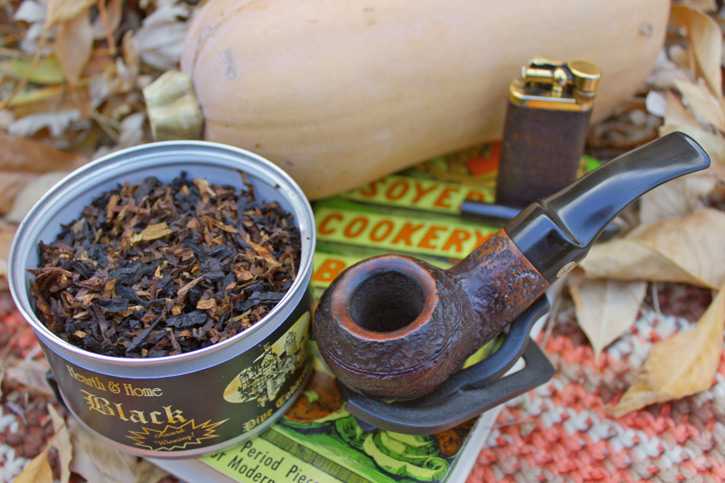 A cat-food style of tin is used for H&H’s Black House. I’ve come to really appreciate this particular style of tins as they seem to hold up to the rigors of ageing. Their seals are physical rather than contact-pressure surfaces, and aside from occasionally bowing at the top and bottom causing stacking issues, hold up to the rigors of moving them around if needed. Opening the tin reveals attractive confetti representing nearly every hue imaginable of tobacco: light and bright, cocoa and brown, black as tar. The tobacco in the tin smells of citrus and figs with a typical Latakia undertone. It’s a chunkier-cut tobacco, not sticky in the slightest, and is a little on the dry side.

First quarter of the bowls after lighting become quite flavorful. The drier tobacco takes to a flame without hesitation, and the Latakia is first to greet the senses. There’s a slightly spicy and pleasant bitterness to the tobacco, and the retro-hales are enticingly complex. After a few minutes, though, a lot of the “first light” qualities start to diminish. Behind them, up until the halfway point, a lot more of a typical Oriental spice lingers on the tongue and lower palate, along with a just-right amount of what I believe is a Cyprian Latakia. This is not a particularly sweet tobacco, but it has occasional hints of dandelion bloom and honeysuckle in the upper palate. This goes well with the fact that this is not a tobacco that yields thick smoke, in the sense that it is not meaty rich. Smoke volume is acceptable, though!

At the halfway points of Black House, I’m left wondering where my experience went. The tobacco kind of muddies into itself. It doesn’t become unpleasant at all, but it does loose some “oomph.” I found allowing the pipe to go out, relighting and tamping woke it up again, however it didn’t always carry on for too long. The nose of the flavors turns somewhat yeasty, and the Latakia still lending a bit of its smoky touch, which keeps me entertained to some degree. I tried quite a few pipes while going through this tin of tobacco, and all of them seemed to lend a different attitude–my favorite was the cob. It thinned out the smoke and the mouth-feel a tad, but I felt like it opened up more of the subtle flavors, especially after the halfway-mark.

Three-quarters to the end of the bowl I seemed to routinely get an ashy, almost charcoal taste from the tobacco. As one of those that not only smokes the tar-laden, dog-ends of cigars, I look forward to the end of bowls of any given tobacco with the hope of richness and crescendo. Black House fizzles more than pops. This seemed to happen to a greater degree in my smaller pipes, to which I am more partial given the rich and heady tobaccos I typically enjoy. I fixed this at times by doing something I almost never do: at around the three-quarters mark, I loaded up a little more tobacco upon whatever is left, and I have let it go completely out. I pretty much had a second bowl on top of the first. Like twice-cooked pork, it gave it a whole new dimension and at that point, finally, I was able, if not unfairly, to get my tail-end experience. There routinely came a salty and savory point which made me happy–even the citrus I experienced in the beginning seemed to remain for much longer. Much like finishing a bowl of collards and grabbing the bread and sopping up the pot liquor, if there’s not a little something extra at the end, I get grouchy. Not this time of year, no sir. I shall have my drippings. Nicotine in this tobacco is just shy of moderate, and I successfully paired good medium-roast black coffee and lighter scotches quite well with Black House. 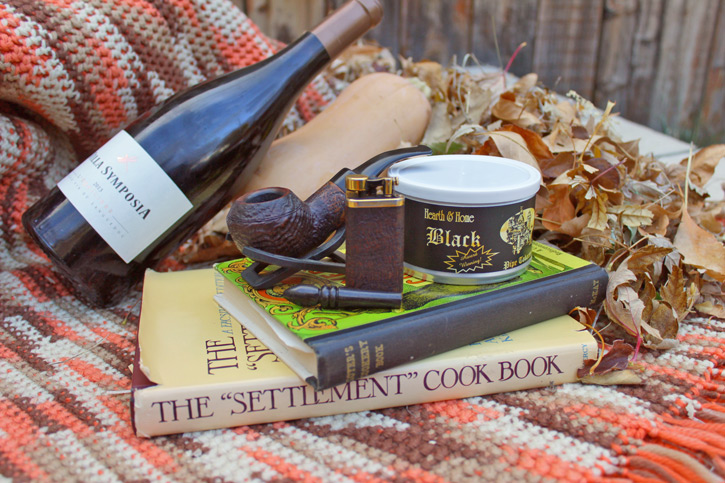 One important thing as a taster and tester of tobaccos is I never leave the folly of my own human error out of the equation, regardless of a tobacco being celebrated or something unknown or unappreciated. Each time I have a tobacco that does not fulfill, I subtly adjust what I’m doing. I try smoking in different environments. I switch pipes. I try different ignition sources. I try a beverage. It isn’t at all scientific, as anything with enjoyment rarely is: it is experimentation. It’s the overall seeking of a feeling and satisfaction that is being sought. Much like driving, conditions may vary. Unless something is broken in the operation, the operator must be aware of his own interaction with any given thing.

Hearth & Home, Russ O and Black House deserve a nod, not only from me but those who have come before me that know it well. Perhaps better still, an honorary nod need be given to the 759 which inspired its creation in the first place. Granted, my tins had a little age on them, and that may have had something to do with it, so your mileage may vary. My final, personal verdict is it’s a good Balkan tobacco. It lacked a bit of the nuts-and-guts of other punchier tobaccos I prefer, and it gave some interesting flavors when played with a tad. I wouldn’t consider this an “all-day” smoke, but it’s not too difficult to enjoy, and it is easy to mess around with. I won’t cry myself to sleep at night if I can never get it again, however, of the two tins I have, they will be smoked and enjoyed. Is it worth the hype? Will it hold up to the rigors and stresses of upcoming merry months? I’ll let you be the judge, overconsumption of eggnog notwithstanding. Happy pre-holidays, everyone–it’ll be over before you know it.