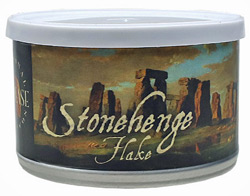 There’s no reason to be misleading here, I’m a fan of not only GL Pease tobacco, but the man himself. He doesn’t pay me except in knowledge, and I don’t get kickbacks for liking his stuff. When he does something I’m not into, I can only blame myself. Considering both he and I drive 20+ year old (obviously reliable) cars, it’s obvious pipe making and tobacco blending (and writing!), as well as silly notions like “pipe politics” hasn’t and will never make anyone monetarily rich. Nearly the entire pipe industry is based on love: if not for our mutual enjoyment, for those who join us and supply us alike. All those opposed to that ideal or doing something contrary need but wake up and smell the Burley.

Greg recently came out with a new artisanal tobacco, “Stonehenge Flake,” and I really wanted to try it. I figured I’d give a go at an interesting Virginia/Perique project embarked upon by Mr. Pease and a John Gawith of Gawith Hoggarth & Co. some decade-and-a-half years ago. The Pease-worthy and swell graphic is joined by this:

“Fine Virginias are layered with Louisiana Perique and just a touch of Burley for added body and fuller flavor, then steamed, hot-pressed, and matured. The cakes are thinly sliced and tinned, ready for your smoking pleasure–today and for many years to come.”

The opening of this tin greeted me with something I rarely smell in tobacco: unsweet, baker’s cocoa. The flakes are calico in color, and they are a bit stiffer than other flakes coming from GL Pease. Breaking them apart was more like dealing with a flake made in England, particularly the Lakeland Isles…it was then I noticed something strange yet familiar. When I broke apart these lovely flakes and began stuffing my pipe and testing the draw: I know that pre-lighting taste and scent. It’s not just cocoa, it’s Lakeland. 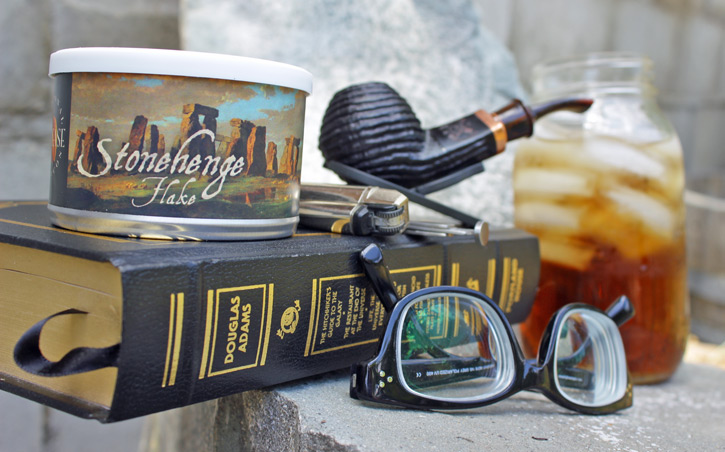 What exactly is Lakeland? I’ve received quite a few and non-definitive answers over the years. I’ve heard it is botanical essences mixed with the tobacco: I’ve heard its infusion, I’ve heard it’s an added concoction atomized like a perfume. To all my ignorance to the exactness of “Lakeland scent,” I don’t know much about it. Application and recipe could be, and probably is, a trade secret. I’ve heard it described as “soapiness,” and “floral,” as well as other not-so-flattering monikers having to do with certain elder female relatives’ unmentionables. Some pipe smokers go gaga over this stuff. I remember my first delving into the world of Lakelands, some unknown leaf one of the shop regulars (before I worked there) offered me and waited excitedly to see what I thought once I got my pipe lit. I thought I was returning to my school days when a terrible joke had been played on me until I saw the face of the man, which went from joy to near sour because it was his favorite tobacco–and the quizzical look on my face had thoroughly offended.

That said, I panicked. Stonehenge Flake, and my friend aside, I knew I had to gut-up and do my job, which, is to write tobacco reviews. Knowing what I do about Lakeland and from my experience with it, I chose a sacrificial pipe. Tobaccos of the Lakeland variety, especially the scented sort, have been known to ghost a pipe. In my decision to quit being a baby and see if my tastes over the years have changed so drastically that I could possibly enjoy smoking a more classic, scented Lakeland, I chose honorably. A wonderful-smoking Tsuge Kaga pipe that has an engineering flaw, a chamber drilled far too into the heel, which has been developing a dark spot over the years. It’s a pipe that I can afford to bury with taps trumpeting in the background to put it to rest, if the need arose.

The Good: The acts of breaking up the flake and packing this tobacco into a pipe are relatively straightforward. I do suggest letting the pieces dry out a bit for even lighting. Any tobacco produced by either GL Pease or Gawith, Hoggarth & Co. is going to be of utmost quality, and Stonehenge flake is absolutely no exception. Two favorite GH&Co. tobaccos are Happy Brown Bogie and Brown Pigtail, both unscented products. Combining the efforts of two pipe tobacco juggernauts who not only care, but love, live and breathe tobacco is something to behold. The performance of Greg’s flakes combined with the tobaccos of Lakeland are a sheer joy to smoke. The smoke of Stonehenge Flake is cool, even-burning and forgiving whether you’re a stuff-and-go smoker with flake or you’re a rub-shred-pack sort who treats every smoke as a complex ritual. That dark-chocolate aspect is evident in the tobacco, the same smell that in the tin greeted me in the first place. There’s a lovely, perky spice that dances on the tip of the tongue that I rather enjoy from more “lively” tobaccos. This can be from none other than the Perique, which I might add, is very much not overdone and lends a savory, somewhat lemongrass attitude while smoking. Nicotine is actually on the moderate side, rather than strong, which is nice considering what a full smoke this indeed provides.

The (not-so-) Bad: Lakeland scent is in Stonehenge Flake, however, it isn’t strong. not compared to past smoking attempts when my tongue was inexperienced, innocent and tender. I still am not a fan of Lakeland essence, so I’m using this opportunity to inform those who also do not enjoy such things. Is it really that bad? In a word, no. I was able to finish one bowl, then the next, then the next. Once the striking memories of the floral nature melds with the wholeness of the mixture, a subtle sweetness comes through and rounds out the experience. Not only was Greg and John able to get me to smoke a Lakeland-inspired product, but I might have actually enjoyed it. 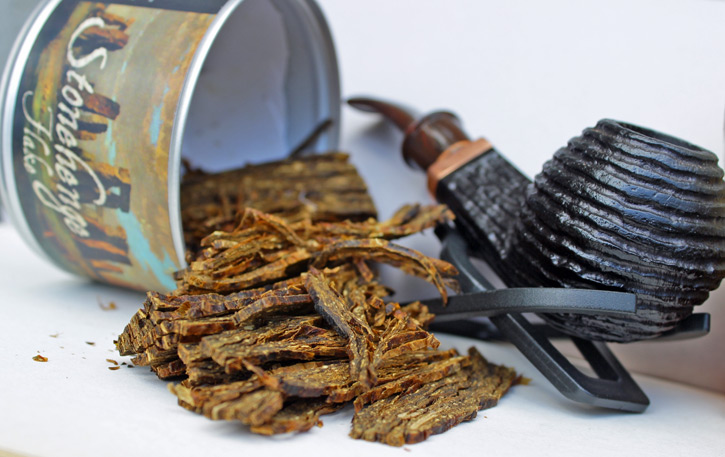 The Ugly: I did not hate this tobacco. It’s simply not something I am accustomed to smoking, and that is hardly the tobacco’s fault. They had an idea in mind, and they did it well. To repeat, I smoked repeated bowls of a scented Lakeland, something I thought impossible. After half a tin of this tobacco I nearly had myself wondering what was so bad about Lakeland-scent. Have I “gotten it?” Am I a convert? Only time will tell. Perique and I also have a strained relationship, and I have found myself enjoying it more and more as time presses on. The Tsuge Kaga pipe is safe for now, so I switched over to my new Dagner short bulldog with cumberland stem.

Overall Stonehenge Flake is for certain tobacco smokers. Very experienced tobacco smokers (of which I’m not even sure I’m qualified to call myself), particularly those who have an affinity for the flowery stuff, need to stop what they are doing and give this stuff a try. The Lakeland-lovers haven’t had many new versions of this style tobaccos to try, at least not in a while. There is nothing but performance and top-notch leaf quality here. The care and attention to detail is what makes me such a fan of things GL Pease. Oh, and do yourself a favor, grab a book, pour a big glass of iced tea and find some cool shade outside while smoking this–it’s simply divine.

MORE READING  Play Misty For Me

There’s a reason why I enjoy writing about pipe tobacco. I like trying new things, broadening my horizons and challenging myself. I look forward to triumphs as much as I do mistakes. All of it is valuable. It doesn’t take someone with a knowledgeable palate and/or years of stoking experience to find pleasure in this craft, merely love and recognition of it. Writing about it makes my tobacco experience even more alive for me, especially since the subject matter is enjoyable. I enjoy my job. There’s no reason or upside to taking opinions seriously that solely complain, grandstand, nor for anything that leans sycophantic. When I pick a tobacco, I stick with it. I give it a genuine chance. Choices aside, I suggest you do, too. It’s the principle of the thing, and there’s no reason not to be honest no matter what you decide. It isn’t all roses, the ubiquitous symbol of love, even if what you are smoking is the highest quality and nearest form of smoking them.