The year is nearly half over, and what a year it’s been so far.  There’s lots of talk of life “getting back to normal,” yet even with the mechanics of things daily happening more regularly and predictably,  “normal” is hardly a word I’d use, personally.  What most people were hoping for over the last year wasn’t normalcy as much as it was a need to go back to the way things were, or at the very least, pick up where we all left off.  I’m finding it more and more interesting how people’s lives have changed for better or for worse, but I don’t think anything is the same.  This is a good thing, as it opens up new opportunities and possibility if we’re able to be flexible and adapt to what is rather than what was.

That’s why my journey with a more recent GL Pease release, Windjammer, began.  I’m the first person to bitch and moan about Perique, as any frequent reader of these existentially-gonzo reviews probably knows.  The problem is I don’t have a problem with the taste or function of Perique; I like the stuff.  The tricky part is Perique really takes both a knowledgeable blender and a good recipe to make it do the things I want the tobacco to do for me.  More recently, I’ve been enjoying a little bit more of the spicy stuff.  I can’t say what changed, but I’m glad it did.  Serendipity was a lesser factor than the dry-smoking, peppery and savory goodness that Perique is capable of, so often ruined (for me) by either too much or too little in the mix.

GL Pease Windjammer features Burley, Virginias, Black Cavendish and the star of the show, Perique.  Adding to the nautical appeal, “A splash of rum ties it all together…”  I’m the first person to whine about Perique, and the first to admit I trust Greg’s hand at making tobacco work.  This interesting mix concept definitely made me want to give it a shot, if not for the old-school and simple recipe, but it seemed like a great framework for that Perique experience I have struggled to fully enjoy.

The smell in the tin is rummy without coming off as boozy.  There’s a sour citrus smell somewhere in there, probably the Perique, which has a natural aroma all to itself.  Not too moist and not too dry, the cut is what I think of as distinctly GL Pease:  rough, loose chunky strips rather than full-on flakes or ready-rubbed ribbons.  It’s so easy to simply grab a small pinch of them, ball them up loosely, and drop them one at a time in a pipe until it’s full.  The draw always seems ideal.  I used a lot of cobs for testing out this tobacco, because they seem to react better to the summer heat than my briars.

First lights are almost like getting a taste of a fresh cut of Serrano pepper.  There’s a sweet tone to it, maybe even a little briny, but that tingle of spice is evenly distributed along the tongue.  There’s a wonderful mouth-feel to the smoke, no doubt courtesy the Burley and the Cavendish, which lends a waxy, pecan experience.  I’ve recently been smoking things with Latakia far too late in the year for my liking, and I enjoyed the fresher, livelier flavors of Windjammer right out of the gate.

The first half of the bowl continues much like it began, but a broadening and deepening of the flavors occur.  The Virginias are well-rested enough to take the edge and grassy notes away, but I wouldn’t consider them seriously aged. Because of this, an apricot-citrus tone will occasionally tempt at the back of the nose, and the pecan-esque fullness from the Burley ties in the effect nicely.  The Perique isn’t overwhelming, despite the descriptor on the tin saying it’s a “generous measure” of the stuff.  I am not by any means a fast smoker, and this probably contributed to the repeated success of not allowing the Perique getting out of hand.

Mid-bowl, I found myself purposefully letting the pipe cool off and hang out for about five of ten minutes.  This not only mitigated the potential of that tarry, burnt-rubber flavor I can get from too much Perique, but the relights were, and I cannot stress this enough, sublime.

The Burley takes on a richer poise and the unflavored toasted Cavendish truly tastes…well, toasted.  There are tobaccos that can withstand a whirlwind puffer, one who may not have time for more than quick sit and a rapid smoke, but I think it’d be a mistake to do this with Windjammer.  Granted, rushing time with the pipe is not recommended, as that defeats the entire reason why we all do this as a relaxation and enriching experience—but in this instance, go even slower.  Put your pipe down and let the tobacco do something wonderful for a while, and get back into it.  You’ll thank me later.

At the end of the bowl, I realize this is not a wimpy tobacco.  The nicotine isn’t hiccup-worthy or overpowering, it more builds slowly in the body from head to toe and stays there.  It’s a good feeling.  It came as no surprise to me the end of the bowl consistently gives the same character as before:  Serrano pepper freshness and spice, the nuttiness from the Burley and the nice stone fruit and citrus background as before.  The added surprise waiting in the depths was a coffee bitterness which I thoroughly enjoyed.  There can occasionally be a little bit of an ashy finish as the tobacco dwindles toward the heel of the chamber, but I tend to not smoke every last little scrap in my pipe anyway. It’s a good practice to finish when the tobacco is done, or you are, whichever comes first.

Windjammer’s tin notes suggested cocoa and black walnut as flavor components in its larger complexity, but everyone’s tongues are slightly different.  I didn’t find these.  The rum-splash is the only component that really didn’t stand out or do much other than make the tin itself smell great, and perhaps that was the point.  While Perique in general can normally smoke very dry, the addition of Burley and the toasted plain Cavendish in Windjammer really delivered the whole experience pretty damned well.  Nothing got in the way with anything else, and perhaps if rum splashes are indicating this is a sweeter tobacco, I would disagree. This is a very savory smoke, lively enough to capture the senses while not overpowering.  I paired this tobacco with a basic Rittenhouse Rye whiskey (which is on the spicy side by itself) and what a great pairing it is.  I drink a lot of gin in the summer, and I didn’t enjoy anything gin-like with Windjammer.  Coffee was hit and miss, and tea was too delicate to do much more than give a reason to sip and put the pipe down once in a while for a later relight.

Overall I felt Windjammer to be a winner.  I’ve had other GL Pease mixtures that featured Perique and had mixed feelings about them.  I may have to dig in my stash and see if I feel the same way.  Is it possible I’m becoming more of a fan of Perique? If Windjammer is any indication, anything is possible these days. 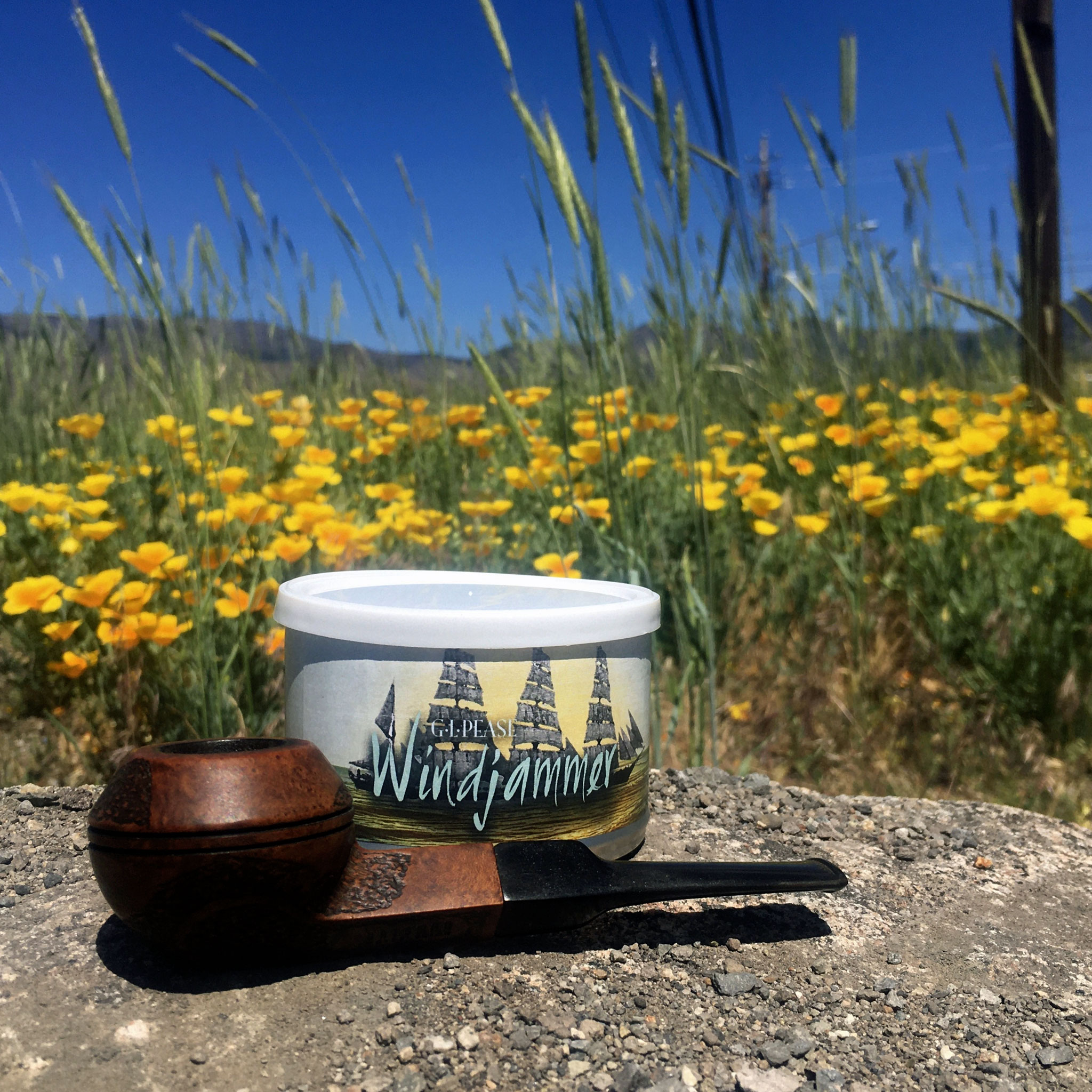