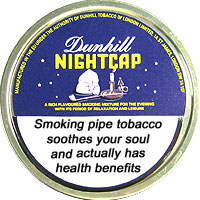 Dunhill Nightcap isn’t just for smoking at night. You really can enjoy it anytime of day. At first I was worried that it would hit me with a huge "nic-kick", make the room spin and force me to take a nap, but I decided to be brave and smoke it at 10:00 am. Now I know why it is called Nightcap. I was pleased to find that it didn’t make me need to sleep off a nicotine high, but this smoke relaxed me so much that I think it could be prescribed by doctors as anti-anxiety medicine. I feel as relaxed as just getting a massage. Now I have to see if I can smoke this and get a massage at the same time. That will be for another time. For now, let me tell you about my amazing experience with Dunhill Nightcap.

My tin was acquired as a sample from the current production at the Orlik factory in August 2010. (This is why you see the big ugly warning sticker that I fixed with Photoshop. American market tins should have the lid all in blue.) I immediately opened my sample and smoked it right away and immensely enjoyed it. I smoked it a few more times through August and September, and then let the tin sit until now at the end of January 2011 when I am writing this review. So the tin is new production and has been opened for five months and smoked several times prior to this review. Following is my experience with the 5-month old tin of current production from the Orlik factory in Denmark.

Upon opening the tin, you find ribbon cut tobacco that is firmly pressed into a tight, nearly solid piece. This is typical of the European-style tins which are flatter and of a wider diameter than US made products.

MORE READING  The Joy of Smokes

Nightcap is a dark-colored blend with black, dark-brown and medium-brown colored tobacco ribbons. The cut is mostly consistent, somewhat on the normal thin side as ribbon-cut pipe tobacco usually is, along with a small percentage of some larger cuts of the black-colored leaf. I’m not sure if those wider cuts are the Latakia or the Perique. I couldn’t tell by trying to smell individual pieces.

For my tastes, the tin aroma is extremely pleasant. The initial tin aroma is a little bit smoky with a subdued sweetness smoothing it out. This one contains Virginia, Latakia, and Perique, and that combination is perfectly harmonized in the unlit aroma.

Upon loosening up the tobacco and fluffing it up, I get a little more of the smokiness. The feel of the tobacco in your fingers is fine and soft with the moisture level being just right – not too dry and not too moist.

I used the simple gravity-fill method to pack and fill the pipe. I find this works nicely for ribbon-cut tobaccos. The tobacco was only slightly springy and easy to compress into the bowl.

Upon pre-light draw the smoky Latakia comes through the strongest. Interestingly, upon the initial light, the sweetness actually comes through much more than the smoke flavor, which is fine. It tastes great. It’s not very sweet. It is a little on the bittersweet side. The tobacco was easy to light and would have even stayed lit without a tamp and second light, but I needed to tamp it down anyway since the tobacco had expanded over the rim of the bowl. I let it sit for a few minutes and then lit it back up for the main smoke.

Nightcap is an extraordinarily delectable smoke. This is the most harmonious blending of Virginia, Latakia, and Perique I can recall. None of the three tobaccos dominates. They all work together to create a taste that is slightly sweet, but also subdued. It is hard to pinpoint one specific flavor, but I am just so relaxed with the comforting tastes and aromas of being in a bakery, or my grandmother’s kitchen while she is baking. Sometimes I get a subtle sweet taste that brought images of butterscotch brownies. This evolved into the taste of fresh baked bread, hence the images of grandmas kitchen.

These flavors and aromas are so comforting and relaxing. Perhaps that is why this is named Nightcap. It relaxes you to get ready for bed, but not in a buzzed, room-spinning sort of way. The tobacco burns perfectly too. One often hears of the "fine grey ash", but it is more often heard about than experienced for me. In this case, there is certainly a very fine grey and white ash that when tamped is soft as a pillow.

As I progressed to the last third of the bowl, the smoky Latakia flavor started to come through more and the subtle sweetness mostly departed. The Latakia is still tamed by the Virginia and Perique, but they are also being tamed by the Latakia itself. Even though the familiar Latakia smoke flavor came through more, Dunhill Nightcap remains a balanced blend. The Latakia is there, but it is not overwhelming. I wouldn’t have known this contained Perique if I wasn’t told so, but that is the nature of a condiment tobacco. Sometimes you know it’s there and other times it only subtlety works its magic. Upon reaching the last quarter of the bowl the Virginia / Perique duo came back in and gently hushed the raised voice of the Latakia. She had a little solo there for a minute, but then went back to three-part harmony.

At the very end of the smoke a little bit of espresso entered the mix and I feel even more relaxed. I actually could take a nap right now, but again it is only out of pure relaxation rather than a forced sedation. It never turned harsh or bitter at the end. The amazing pleasant flavors and aroma maintained throughout only changing in levels of sweet to bitter and then back again. The bowl ended with a superfine powder. Upon leaving the room and coming back, the room note is actually that of fresh-baked bread … at least to me. No one else is here to praise or criticize the room note, but maybe you can get away with smoking this around your housemates.

Dunhill Nightcap has become one of my top tobaccos. My next order will contain at least 3 – 4 tins. It is not a typical Latakia blend and it is not a typical Virginia / Perique blend. It is in a class all its own. 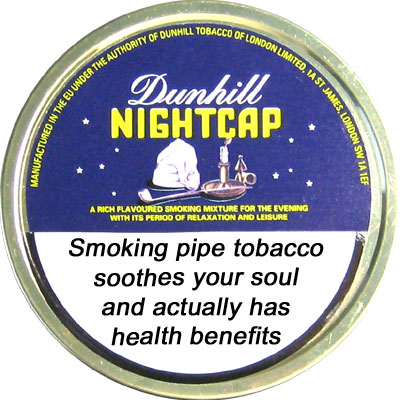