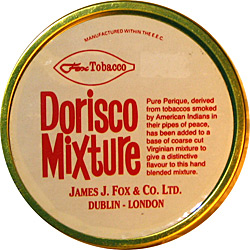 A strange animal, this Dorisco Mixture. It has been called one of the biggest practical jokes in the world of pipe tobacco, owing to its tin description indicating it as a Perique-forward Virginia blend, while neglecting to mention the rather generous amount of Cyprian Latakia in it. My own experience with it came about quite by accident, as I had mis-typed the item number while bidding on a popular auction site and won a well-aged tin of this instead of the intended tin of Escudo. I decided to hang on to it, even purchasing a recent production tin for comparison, and am happy to report that it was worth the effort.

It really is mystifying that Perique and Virginia are the only tobaccos mentioned on the tin, even incorporated into the beat generation-esque artwork of its label, while the inclusion of Latakia is quite unmistakable upon opening it. Of course, not everything that those folks across the pond do makes sense to us Colonials. I recall my first experience with a certain GL Pease blend, also described as a VaPer, also containing Latakia (insert angrily-shaken fist), which actually turned into a quite pleasant experience (insert duly-educated bow to the master). Had I done my due diligence, I would have found that Greg fessed up to the 2% addition of the condiment on his website; however, had I read that prior, I certainly wouldn’t have enjoyed the same journey of discovery when smoking my first tin of Fillmore. Mr. Pease even implies that this sleight of hand was a nod to the practice of the blending houses of old, and I can only assume he was referencing Dorisco. At any rate, this review is about Dorisco, and so shall it commence.

Tin: Yes, there is certainly a good deal of Latakia in this blend, which even Lataphiles could not miss. It presents rather camphorously upon popping the tin, perhaps more so in the well-aged tin, one of Harrod’s of London provenance approximately 23 years old. Both young and old tins exude notes of glue and parchment, tickling the trigeminal nerve in this reviewer’s nose, along with the familiar sweet fruity spectrum standard with Virginia-Perique blends. Between them there were only faint aromatic differences to discern their age, while visually they were slightly more disparate. The older tobacco and wrapper had certainly darkened a good deal, showing a blend of mainly black and mahogany colored strands, while the younger mixture still displays a lot of lighter blond leaf. After some moments airing, the leathery smokiness of the Latakia and Perique moved forward and calmed, hinting at the bouquet in the smoke to come. Neither evinced anything other than a very pure tobacco blend, common for their lineage. 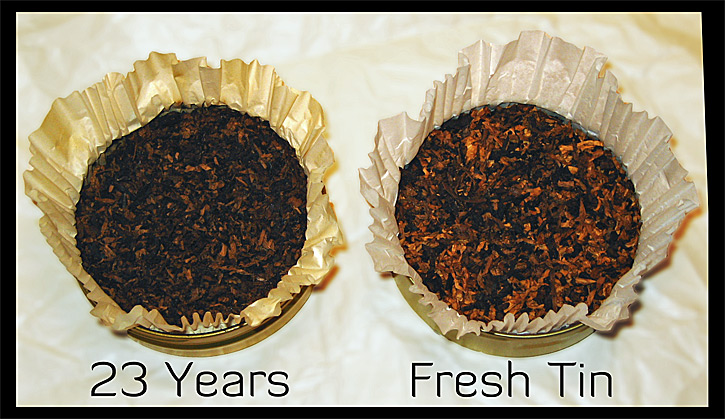 Char: Both tobaccos are only mildly moist in the tin, very quickly air-dried to my preference for smoking, and packed effortlessly. In this regard I am reminded of the Dunhill product line, which is worth mentioning for its ease of use. The charring light easily segues into the top of the bowl, only needing a light tamp and touch-up flame to continue nearly to the bottom, again proving to be an easily enjoyed experience.

Top: The first impression is how striking the balance is in the blends, with no single flavor moving to the fore; rather, it seems a perfectly even-toned flavor, in itself a remarkable balancing act. It becomes quickly apparent that this balance is best experienced with an extremely slow sipping cadence, rewarded by an easy burn and occasional bursts of sweetness, not unlike finding an odd raisin in one’s carrot cake, thanks to the undercurrent of Perique. It also leads me to wonder if there is perhaps a small amount of Oriental leaf tucked away in here somewhere.

Mid: Through mid-bowl the balance remains as the spice builds, in every variety of pipe and chamber configuration sampled. One is hard-pressed to find any one flavor dominating, although in this subtle balance there is an evenness that is missed from more nuanced blends where the flavors tend to shift enticingly, adding color and complexity to the smoke. Certainly the Virginias are the backbone and catalyst, lending definition to the edges of sweet, savory and smoky condiments. The spicy notes are firmly turpeny, phenolic and camphorous, with the Latakia amplifying those aspects of the Virginia and Perique leaf. Interestingly the secondary smoke produced, of which there is an ample amount, is every bit as spicy as the primary, and quite pleasantly aromatic. It is indeed reminiscent of another Pease blend, Cairo, in that regard.

Finish: Easy burning is a keynote of this blend, and even smoking it rather absent-mindedly while I write requires only a couple of relights. While it gains slightly in body nearing the end of the bowl, and sometimes exhibits a coyness, it remains rather consistent in its flavor throughout. The top of the bowl’s peppery notes are balanced by a mild increase in sweetness toward the end, but there is no drastic or emphatic change in flavor or body overall. It leaves an agreeable tartness on the palate, slightly floral and clean, keeping with this blend’s pure, un-topped nature.

Room Note: As mentioned, the room note is in the vein of an Oriental blend or quality cigarettes, with a decided lean toward a spicy incense that is actually rather pleasant even to non-smokers. The notes of pine tar and myrtle are dominant, perhaps more so than in the flavor itself. It does produce a good amount of smoke, perfect for practicing your smoke rings.

Overall: This is a rather difficult blend to pin down. It is certainly not a straight VaPer, and shouldn’t be classified as one, however much some may want to argue in its defense. Browsing some other reviews of it, most fall firmly on one side of a love-it-or-hate-it opinion. I find it to be an interesting departure from my comfort zone, with many interesting qualities and a good, if rather one-note, smoking experience. It has a fairly medium nicotine content, and responds well to the Delayed Gratification Technique, which allows some deeper woody flavor to come forward.

RATING: 72
Of 15 points allotted for presentation, Dorisco suffers for its fiendishly evasive labeling. I can only award 4 points here, for the campy typeface and simplicity of design, the humor value in its deception, and the nice mixture of quality leaf. I’ll award 31 of 35 points for the draw and burn, which truly are rather effortless and consistent throughout. It is quite unchallenging here, the flavor is balanced and consistent, and it burns down to ash with minimal tending. Dorisco again suffers a little for the flavor and aroma scoring, netting only 37 of a possible 50. Definitely not a bad smoke, and with many redeeming qualities, it disappoints with its lack of anything that stands out. Woe be to the smoker who is unaware of its Latakia component and expects a standard VaPer, for sure. Knowing what it is, though, does not offer any hidden gem qualities that really make it a standout blend, unfortunately. True, it is a blend of quality tobacco, free of flavoring in the English tradition; however, it lacks anything remarkable in and of itself, and did not benefit much if at all from an extended cellaring time. For the price point of a "boutique" blend, I expected more.

Cellar or Smoke?
Finding it difficult to categorize, Dorisco is a good English blend that will appeal to many but certainly not all. In trying to draw comparisons to popular blends, I find it in the vein of such names as Dunhill’s Royal Yacht (though without the topping) or Elizabethan Mixture (without the brilliance), and the previously mentioned Cairo and Fillmore (but without the charm). It did not change appreciably with the passage of a couple decades, so if you’re curious to try it you’ll be best served buying a new tin, rather than intentionally (or unintentionally) investing in an aged one. If you do find you love it, rest assured you won’t incur undue expense trying to stock your cellar with vintage tins.

MORE READING  From Dutchess County to the Loire Valley

Since its beginning in 1881, James J. Fox & Company Ltd. has been considered the producers of the finest mixtures available. The company began operation in Dublin, Ireland on Grafton Street. In 1870, James J. Fox worked for James Madden who was well-known for blending fine pipe tobaccos. James J. Fox studied under Madden for over 10 years and opened up his own shop on December 12, 1881. His hard work and ability to blend fine tobaccos soon was noticed by many including Prince Edward and other nobles. After James J. Fox’s death in 1916, the family ran the business. Later the Fox family acquired Robert Lewis in London and moved the company to 19 St. James Street – London.
Today, all the J.J. Fox and Robert Lewis tobaccos are tinned by Kohlhase & Kopp in Germany. The Dorisco Mixture recipe has remained the same over the years. It contains a base of aged Virginia tobacco, Louisiana Perique from St. James Parish and a dash of Syrian Latakia. These tobaccos married together produce a wonderful flavor and aroma that has been enjoyed by fine pipe tobacco connoisseurs all over the world.

– Above is the official response to my query from our American importer, Steve Monjure. I am surprised to learn that it is Syrian Latakia, as it held the decidedly clay-like, loamy notes I associate with its Cypriot counterpart; however, this is a subjective exercise and I am a taster rather than a blender of the stuff. If only blending houses would give away their recipes in detail! But again, these little mysteries are part and parcel of the wonder of our hobby, and the reason we keep coming back for more. – E. Roberts 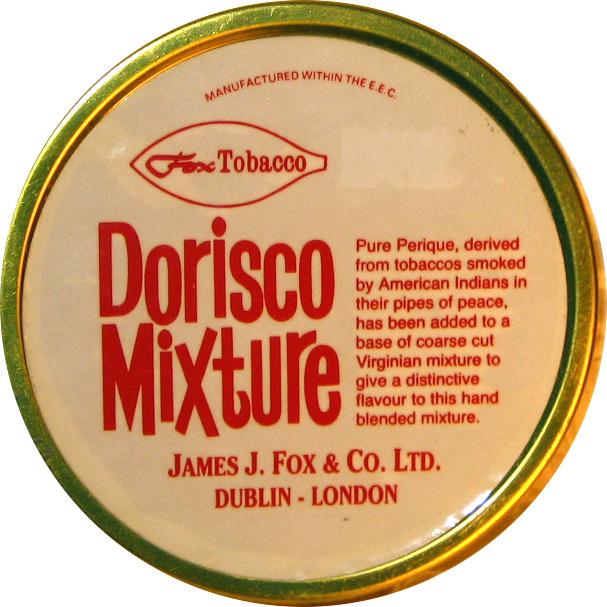