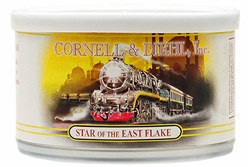 With the weather flip-flopping across the country as it has, I’ve had a hard time finding a comfort-spot with my tobacco. One moment it’s nearly spring, the next moment it’s snowing sideways. Here in Sagebrush Country, it is no different: last month I was in shorts and a t-shirt on my porch, and here I am in March watching bitter Alaskan storms pummel the desert. March is coming in for some of us like a crazed, robotic space lion than a lamb.

A tobacco I’ve found quite a bit of solace and comfort with in the past is one I tried getting others to get into, Cornell and Diehl’s Star of the East Flake. There is another variant that is not in flake form, however, I find the aged/pressed slices to really hit the spot. It is a tobacco I affectionately referred to as a “Penzance killer.” Scoff as some had, Esoterica’s limited production means versus a hyped and hungry pipe tobacco public meant spotty availability of Penzance over the years. Unlike Penzance, which is a decent smoke, Star of the East Flake has quite a few things going for it Penzance doesn’t. I found Penzance to have a chunky, compost-like consistency which broke apart too easily and could cause inconsistent bowl-loading, tins would pop open on their own, the bulk bags would develop holes, and the worst part: it was hard to get.

The tin reads: “STAR of the EAST FLAKE — One half Cyprian Latakia with a generous portion of Izmir and sweetened with stoved red Virginia.”

C&D won me over with this mixture some six years ago when Penzance was the darling child of the (now-waning?) “lat bomb” craze. I like Latakia, Cyprian in particular, especially when the snow is piling up. There’s a way to load-up on the smoky stuff without getting unbalanced, and there’s quite a few blends that achieve this. Penzance is a heavy contender here, as is Star of the East Flake. Many others out there with a Latakia-forward attitude approached their tobacco like hot sauce: the more, the better. If your face wasn’t melting, according to “hotheads” it wasn’t worth it. Well, I like rough stuff as much as the next guy, but there has to be an endgame, that being flavor and personality, or it’s simply brawn without much brain. 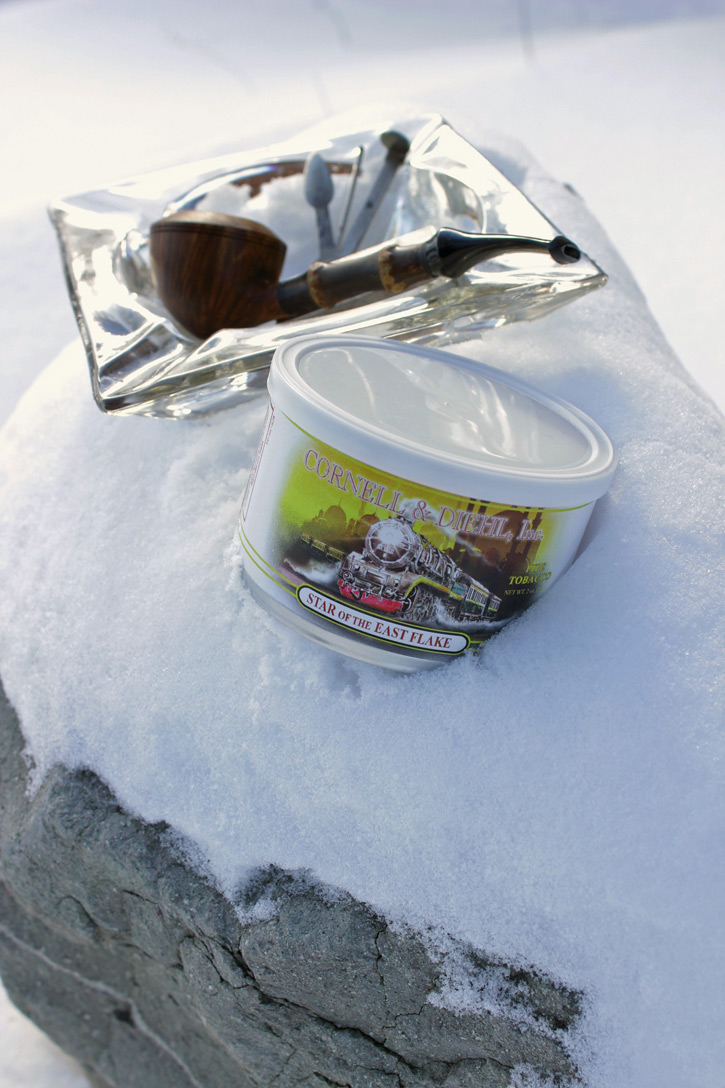 I’ve had some experience with this tobacco, but it still impresses me every time I open a tin. The smell is meaty, almost a grilled fatty-beef aroma, with a hint of pepper spice and even a very distant note of plums. The consistency of the flakes is pushing granular, as they are dense but not too tough to break apart. My method is usually to let the tin air out with the lid off for a day; even the dry air of my neck of the woods won’t turn this tobacco into a crunchy mess overnight. I then fill the bowl haphazardly, until the draw is just right.

The first puffs can be hard to get lit, but once it gets going, it stays the course. A lot of the up-front Latakia is noticeable and almost too much, however, the Izmir starts to come into play almost immediately. I’m certain this is where the light spice comes in. A bit dramatic in theme, a hyperbolic comparison might be to say it’s more Serrano chile than Jalapeño, in that I find Serranos to bring a gentle, just-right flavor and spice to something over the more stern Jalapeño, and it isn’t close to Habanero in strength. You know it’s there, but it isn’t going to kill your senses–and no, this isn’t a spicy tobacco. Izmir is probably one of my favorite of the Turkish leafs as it is, for it has a dry quality that cuts down on tobacco that may be too rich, while not getting overwhelmed. It has a light, sweet and toasty flavor, and while I’m not partial to it alone, it as a component has become a favorite of mine when paired with Virginia tobacco.

MORE READING  The Journey Is My Home

About one-quarter to midway through any given bowl is where I find another favorite of mine, Red Virginia, brings its signature sweetness, snack-chip body and even floral bouquet to the equation. To be honest, it was either a happy accident or a bold choice so much Cyprian Latakia worked as well as it does when paired with Red Virginia, as it doesn’t often play well or sing loudly enough with such strong players in large amounts. This is where the Izmir plays mediator, and allows the flavors to take turns and cohabitate. More lively debate with timely conclusions than hard-headed arguments for the sake of them. This is a great place to go get the mail, stir the soup, make a phone call or pour a drink. Setting down the pipe a few times and letting it go out for just a moment yields rewards.

The finish of the bowl is where the magic lies if you’re a pipester that enjoys the final hurrahs and dregs as much as I do. Much of the minor flavors of Cyprian are gone at this point, and not surprisingly, the Red Virginia takes a back seat. It’s a show about the Izmir at this point, and the tongue-tingling richness that everything has come to. This is an after-party, where the zing is being remembered, the charisma changed from center-of-attention to drinks-on-the-patio. Once in a while a tamp and relight stokes up a bit of the beginning, and it goes right back to the easy chair.

My criticisms over time with this tobacco have been consistent. The granular nature of Star of the East Flake can cause some “snipers” that plug and cause gurgling at the draft hole on occasion. In good company, this stuff smells strong, and in the more nose-discerning crowd, you might see some wrinkled faces–this not a tobacco for impressing non-smokers, this one is for you, and probably you only. Lastly, aging doesn’t produce awe-inspiring results, although not surprisingly sealed-tin time does tone down some of the Cyprian aspects. I wouldn’t consider it an all-day smoke, but that’s for you to decide. 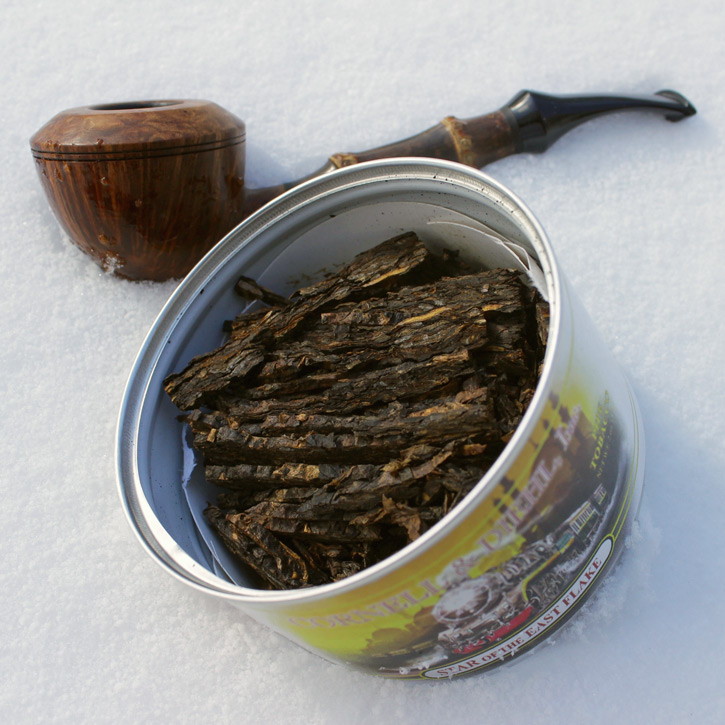 Considering the pros over the cons here, this tobacco is available, it’s great the day you get it, it’s great years down the road. It happily showcases some unsung heroes in the tobacco world with one half, with the other nodding toward a bolder Latakia experience in a balanced fashion. I think it’s clear I like this mixture, with its lively nature and ease of smoking. It’s great for a winters that won’t quit and brisk, early mornings. Nicotine is moderate but not thunderous, and it really handles things like IPA beers, coffee, non-peaty Scotches and any whiskey with enthusiastic grace. The faint of heart or new guy might like it, or they might not. It’s a 50/50 shot, literally and figuratively.

(It is worth mentioning C&D also makes a Star of the East tobacco that isn’t in flake form. It’s a fair tobacco. Check the label, and do not confuse the two. Much like a well-done steak, clothespin art, skim milk, driving a Prius, bed ruffles, or wine coolers, if that’s your thing, have at it. It doesn’t have the poise, character and wow-factor that won me over like its flakier, darker and livelier sibling.)