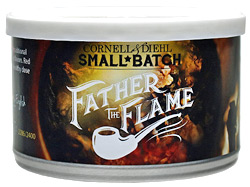 Rules are made to be broken, and for me, it’s not being able to shake the Latakia from the wintery depths from where it is appreciated. By the time the desert has given us our prerequisite two weeks of proper spring weather, the heat is settling in with a vengeance and the need for warm, smoky goodness dwindles. Apparently this isn’t to be, not by choice, but by chance. So sue me if I manage to take Latakia to the beach as summer approaches.

I was faced with trying another release in the Cornell & Diehl Small Batch line, Father of the Flame. It’s an English. A straight-up English, as it is touted right on the rather attractive label:

“An English blend done the traditional way. No topping. No added flavors. Red and bright Virginias and a healthy dose of Latakia. Straight up. How would you like to pair a feature film that explores the history, craft and spirit of pipe smoking with quality pipe tobacco? Father of the Flame is a feature-length documentary about slowing down, embracing life and learning something in the process. It’s also about tobacco pipes. We thank you for your support, and look forward to soon being able to share with you a one-of-a-kind experience about the timeless and transcendant [sic] nature of pipes!”

Cracking the tin open reveals a surprisingly light-colored mixture of much Virginia tobacco leaf. Visually, this stuff doesn’t look particularly healthy on the dosage of Latakia, nor does it smell particularly strong. Maybe after years of expecting dark and rich Balkan mixtures and the trend of tongue-numbing “Lat-bombs,” I’m having to realign my sensors to something more, as described, traditional. Not surprisingly, there’s a strong, clean smell Virginia-leaning tobacco sweetness, but there’s certainly some Cyprian Latakia in there as well. 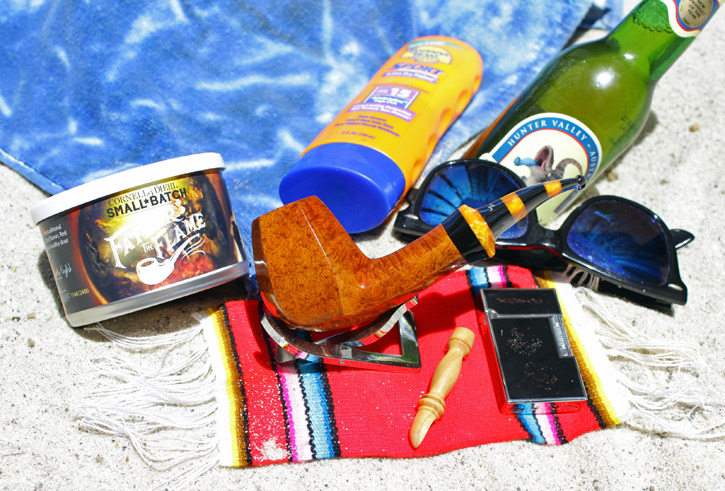 The ribbons of Father of the Flame load easily enough, and the tobacco isn’t particularly moist, which also made loading and lighting straightforward. For someone like me used to chunky and flake tobacco, I had to go easier on the packing, lest the bowl become frustratingly impacted and hard to draw. First puffs reveal there is indeed Latakia in my bowl and in just-right amounts. The Virginia is obvious here as well, with a spectrum of lighter leaves and leaning to a bread-like pleasantness of red Virginia. Before the half-bowl mark, the Latakia really stitches itself into the mixture. I have to give C&D credit here, as sometimes I find improperly balanced Latakia can either underwhelm the nose or start numbing the tongue. A gentler Virginia selection is a tough thing to get proportionally right with Latakia–I’m sure we’ve all found mixtures and blends that start going off in wild directions that are less than pleasant. Here, the balancing act is done pretty damned well.

At the halfway mark, the tobacco looses some of the flavor “oomph” that it displayed so prominently in the beginning. If I were to judge this based solely on English vs English blends, this is pretty typical. While smoking, some blends here will get a tad soapy in smoke texture, others will get tarry or muddy. Father of the Flame, however, stays clean, and even develops a bit more of the bread-like sweetness it hinted in scent before even lighting it. If you’ve ever smelled alfalfa bloom, it has this kind of flavor-note to it. If you’ve ever smelled them burning off alfalfa fields after harvest, it reminds me of this as well. Toward the end of the bowl, the last hurrah fades relatively uneventful, but it does leave one wanting a little more. I asked others, as I do, about the room note, and some found it a bit off-putting, others found it completely pleasant. I’d suggest being considerate of the company kept while puffing on this mixture. 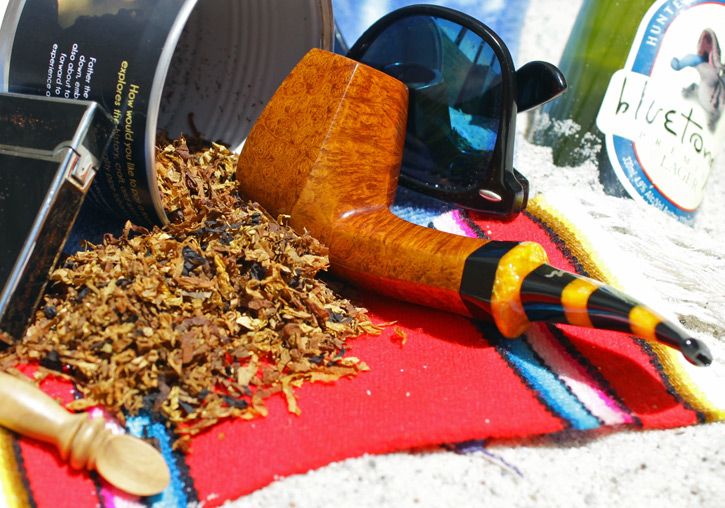 Performance-wise this tobacco smokes more like a straight Virginia blend, and judging from ratios here, this isn’t too surprising. What is surprising is the clean and pure balance the guys at C&D achieved without it being a total yawn or a punch to the senses. It isn’t one of the wild, even edgy tobaccos that I’m used to, but it isn’t watered down or asleep at the wheel. Describing this tobacco as “straight-up” is apt–it is fancy and basic in a fastidious way. I wouldn’t call it remarkable or ground-breaking, as I believe the idea was to take a step back rather than a giant, risky leap forward. I appreciate this personally. It’s a nod to ideas and traditions that forbade cloying toppings or disguising additives; it’s an obvious attempt at a study of tobacco history rather than a rooted favorite that will last generations. In fact, I’m glad this stuff is in the limited run category, because it’s a good (if not abstract) reminder of how things were, as opposed to how they should be. Nicotine is moderate at best, allowing this tobacco to be enjoyed at any time of day, and depending on the amount you stuff in your pipe, burns and smokes cleanly enough to make a short or a long smoke quite enjoyable. Black coffee was a winner along side this smoke, along with young scotches. Any drink heavier or sweeter overwhelmed the balance. I’d recommend anyone try this smoke, novice or veteran alike while it is available. While it may age well, right out of the tin it is ready to go upon purchase.

I can’t say with certainty that Father of the Flame is a dead-ringer for an English tobacco from the days of yore, but allegorically it boasts and delivers the same goal and spirit. The mild-mannered and yet honest nature of this tobacco give a flexibility most folks should find interesting and satisfying. It may not knock the socks off the pipe world with ingenuity, but the thought and care that went into it is obvious to me–and quite appreciated. So go forth and smoke an English at a beach party this summer. Why not?