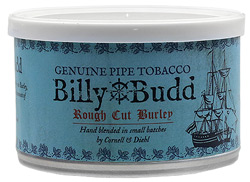 Normally, I like to showcase new tobaccos that I either have not tried or that have just come onto the scene. This month, however, with the beginning of a new year, I’m going to talk to you about an old favorite and an old standby that doesn’t get a lot of attention. 2016 was an interesting year for me, and for a lot of people perhaps one of the more volatile the world has seen. 2017 can be looked at as a new beginning with new changes and challenges, or it can be looked at as a larger, future adversary of things to come. In either case, an old, trusted friend is usually the best ally to have in any situation. One of those old friends for me is Cornell &Diehl’s Billy Budd. Good for any situation day or night, blue-jeans simple in approach and beat-up pickup in character, there isn’t much that’s particularly fancy about it–and where the charm and beauty lies.

Billy Budd is a stout mixture of cube-cut burley, cigar leaf and Latakia. There are more complex and demonstrable cigar-and-Latakia concoctions out there for sure, as well as there is also milder and more sophisticated. The impressive part about Billy Budd is a no-nonsense, stoic poise and surprising flexibility. From a quick, small bowl stuffed while rushing to work to a larger chamber and longer stoking experience, Billy Budd can get the job done. It loads, packs and lights easily. It transports well for the day without drying out. The smell immediately hated by innocent bystanders. It should be brought up early that this is not a smoke for the timid, but is it not so overpowering that the tongue and time spent will come with regrets.

I usually buy my stashes of Billy Budd in bulk, which I’ve done for perhaps the last four years. It all started courtesy a fellow forum member over at Brothers of Briar, who sent my first inaugural ounces knowing my tastes and tempting my curiosity. Not being available for sale at my local store, I took a trip to Tobacco Road in nearby Sacramento, where I found the stuff available by the ounce from a jar. I kept going back for more–Tobacco Road is a fantastic establishment, and a great excuse to get my newest favorite. I’d bring home four ounces, then eight…then I was buying it by the pound. In those years, Billy Budd has changed a little, as tobaccos tend to do over time, but I haven’t minded this so much. The spirit of what it is remains. 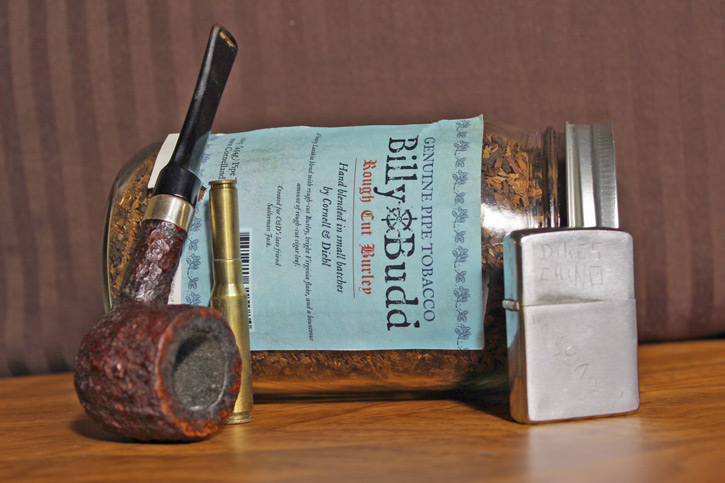 The current rendition available in bulk is drier than when I first started getting the stuff. The color has lightened a tad, but it’s the same rough, chunky experience that follows many of C&D’s offerings. With Billy Budd, I found a happy-place in my smoking preparatory experience, between fussing over fine ribbon-cuts and lazily balling up flakes and stuffing them mercilessly into my briars. The chunkiness of mixtures like Billy Budd simply worked well for my personal pack, light, and smoke rituals. From the start, I never had trouble loading up a big scoop of this tobacco in a pipe, lighting it and going about my business, which again, became part of the appeal. It’s not a dirty smoke, but it has a barnyard funk about it. It should be mentioned, given the cigar leaf component, this is not a smoke where you directly taste the cigar leaf–nor does it smell like a cigar as it being smoked. It adds a healthy, meaty mouth-feel like a cigar, and lends itself as a binder to the other components rather than as a specific flavor. The cigar leaf added is a tobacco catalyst at best. To be completely honest, Burley tobaccos and I have had a strained relationship. Besides avoiding the aromatics, I’ve had really good Burley-only smokes, lending itself to the nutty and warm flavor for which it is known. I’ve also had plain Burley that tasted almost of dusty cardboard, smelled of potting soil and burned hotter than a goat’s ass in a pepper patch. Billy Budd opened up my eyes to what Burley could be, and should be, as it is the base component and significant foundation of this mixture. Burley, as it turns out, other than in shining single examples (usually pressed in fermented flakes, by my reckon), plays well and best with others in specific proportions.

As I mentioned before, this is a flexible smoke, and a prerequisite when I discover something is going to be a staple for daily use rather than a special occasion smoke. From puff to puff, pipe to pipe and even batch to batch, Billy Budd stays honest to itself. After taking to the flame for the first time, the smokiness of the Latakia really wakes up, but subsides shortly thereafter to meld with the meatiness of the cigar leaf. Changes throughout the bowl are minimal, with the only switch is the Latakia taking a back seat to the overall experience after about the first quarter-bowl. Mid-bowl to the dogged dregs at the bottom of the chamber is where I not only enjoy but expect a tobacco to become truly alive, and Billy Budd delivers–not with a punch, but more poetry. Cowboy poetry, perhaps, but lovely verse nonetheless. Expect a good dose of nicotine at this point. The flavors that can be expected are (of course) peaty and beefy, a little salty but with a little kick of distant allspice and ginger. The tie-in is the earthy, horse-stall attitude that comes in and greets the tongue on occasion. This may sound unpleasant, but to those who live in the country or in farmland, near forests or fields will understand what this means–it’s a unique scent which words do little for and only experience and time can decipher. Organic material as it is participating in the cycle of life. When I refer to tobacco as “wild,” this is what I mean. Billy Budd hasn’t been domesticated so far as to become ultra-clean, sanitized, boring, or whitewashed to oblivion. The marker of “character,” a general sense of spirit that a thing of pleasure to me should and would deliver in no-nonsense honesty. This is why I fell in love with this tobacco, and continue the relationship happily. 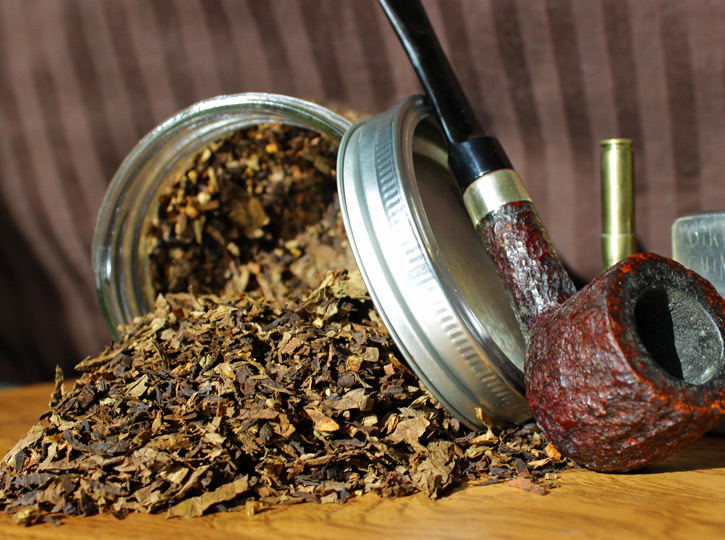 Billy Budd has become a favorite tobacco of mine for years for all particular reasons. It has been a good friend and a loyal companion quite naturally, and a daily staple rather unexpectedly. It isn’t cutting-edge new or bard-worthy novel; it isn’t wholly refined and tinkered-with, and it isn’t the revolutionary crowd-pleaser aiming to all audiences. Some might actually consider it a rough and shitty (neigh!) tobacco. It does, however, charm the hell out of those looking for something real, solid and rebelliously unpretentious. This is a smoker’s tobacco, and one with a loyal way about it. It isn’t really for smoking contests and isn’t suited for fastidious, patient processes of aging. Do you want to pair a beverage with it? Okay, joyfully drink whatever the hell you’d like with it!

Like Melville’s novel by the same name, Billy Budd to me is rough and beautiful. Poetic and a bit misunderstood. Everyone has their tobacco that they can’t put their finger on, in reasonable fashion, why they like it, and why they just can’t quit reaching for it. Tobaccos such as these might be the sort that are sneered at by snobs, misunderstood by the new guys and questioned by connoisseurs. Yet you might have solid connection with it, like an honest marriage, high-mileage pick’em up truck, a best friend, a good & loyal mutt or sweet, mangy barn cat. You genuinely couldn’t give a damn about what others think about your “questionable” relationship. It’s yours. You’re happy as hell, and you have given up rhyme and reason the concerns others might have about it.

“With mankind, forms, measured forms are everything; and that is the import couched in the story of Orpheus with his lyre spellbinding the wild denizens of the wood.”