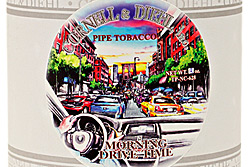 I have to admit; I didn’t really like this blend at first. It came to my attention only recently, although it was released just over a year ago—February 16th, 2013, to be exact. It was Cornell & Diehl’s unveiling at the St. Louis Gateway Pipe Show, the first in their "Working Man" series of pipe tobaccos, comprised of a light English and burley blend with just a touch of Perique. The series also includes the thematically blended mixtures Lunchtime Blues (red & bright Virginias, burley and some Turkish), and Five O’clock Shadow (red Virginia, Perique and some dark-fired Kentucky). 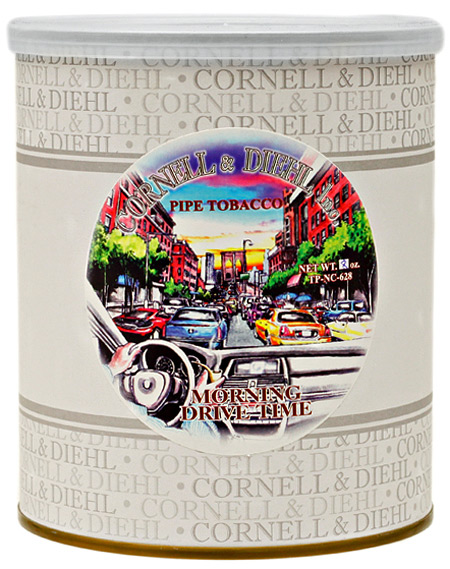 The tin art says it all.

I was arranging an across-the-pond trade with a friend here on the forums, Andy Stewart. Andy had gotten a taste of this and just couldn’t get enough—it was love at first puff. Unfortunately it isn’t as readily available in the UK as here, so he was worried about being able to stock a supply. Happy to oblige, I included a couple of tins for him in my monthly tobacco order—and a tin for myself, of course, if for nothing else than to satisfy my curiosity about this blend he raved over.

My initial impression was honestly a little underwhelming. I’d been reviewing a lot of Latakia blends of late, and my palate had perhaps become a bit shaded toward sharper, spicier tastes. While I love Latakia, I’m definitely biased in my personal preferences; while trying to maintain equanimity in reporting for review purposes, it’s only natural to find more to say about flavors that appeal to one’s taste, and taste is inherently individual to the perceiver. After sampling a couple bowls and feeling it was a bit on the bland side, I put it on the shelf and moved on to other blends, both to review and for purely pleasurable smoking.

After a month of little smoking, I returned to the Morning Drive Time tin idling in my rotation, curious for a second opinion. I’d been resting my palate with some blending ingredients, mainly straight Virginias and a favored aromatic. Peeling back the lid, I found a much sweeter and fruitier aroma than I recalled from the first sampling. It felt more balanced against the smoky, leathery Latakia; yes, there was definitely some intrigue here. Always marveling at the constant chemistry involved in the tobacco experience, I discovered that the brief unsealing of the microcosm of the tin, coupled with the inimitable factor of time, had yielded a wonderful interplay of all those flavors I seek: a certain earthy tanginess, stewed prune sweetness in the Perique, a calmer and more nuanced substance in the Latakia, and all of it finished with a malty substructure of burley. Long story short, this blend went from fail to email, as I finished the tin and promptly ordered more for the cellar. 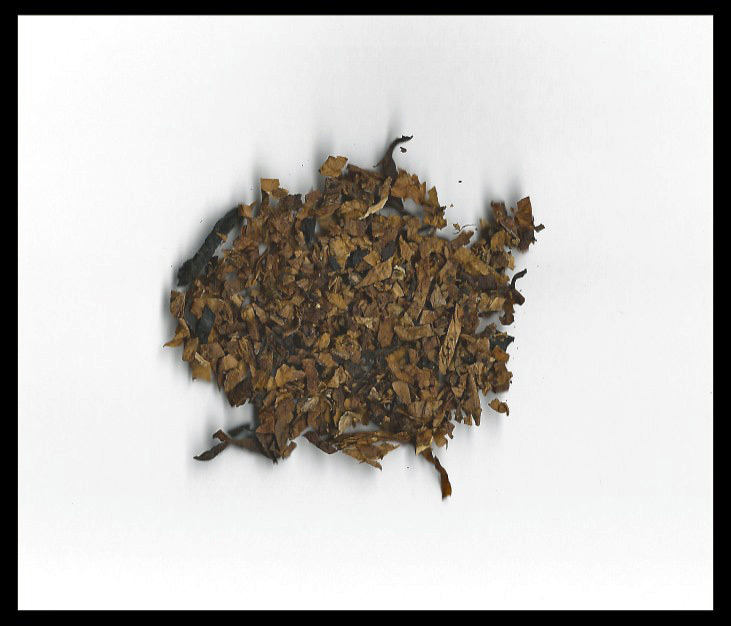 Tin: As mentioned, the initial experience didn’t grab me; however, returning to the tin once it had a chance to breathe revealed its true character. A fine balance of ever-so-slightly-ketchupy Virginia with its fruity Perique counterpart married to the leathery Latakia defines the bouquet. The tobacco itself is a ribbon cut, seeming well chopped, with few long strings. Good moisture in the tin for cellaring, and dries quickly for packing. The tin art for the series is brilliant, cartoonishly portraying a rush-hour approach to the Brooklyn Bridge (points for my hometown!) viewed from inside a morning commuter’s vehicle, a pair of hands behind the wheel holding a pipe—promising a calming retreat from the hustle and bustle to start your day.

Char: Very understated—only a wink of sharpness and enough of a peppery retronasal burn to announce the Perique. The Latakia then defines the smoke, and engages the palate evenly.

Top: The top of the bowl sets the stage easily for this medium-bodied blend—no sharp edges to contend with here. The balance is dialed in pretty quickly, and stays there with a great consistency through to the heel. The Perique comes through distinctly at first, with a dryish peppery complexion, before it settles into a harmony with the other players. 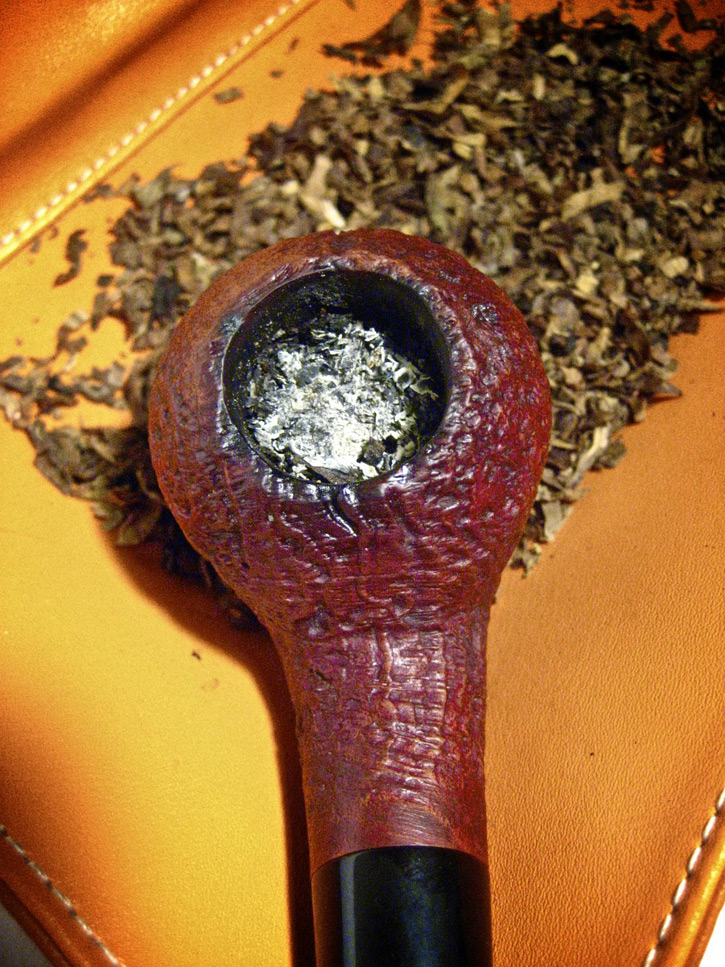 Mid: Perhaps overly influenced by the naming of the blend, I’ve found it is, in fact, a fabulous bowl to accompany my morning coffee. It comes on slowly but steadily; with a feeling similar to the way that first cuppa pulls you upward through the layers of semi-consciousness to a pleasant wakefulness. The flavors meld early and well, one never overbearing another, and drifting through notes of parchment and leather, cocoa and baked bread, malt and ginger. At turns there is even a whisper of good cigar flavor, which leads me to wonder if there is just the lightest pinch of some dark-fired in the mix. There too is a vein of sweetness running through it on the tips of the Virginia and burley, evidenced also in the room note, though it never feels cloying in the least.

Finish: Preferring it dried out a bit before packing, it burns without a second thought down to the heel—which again recommends it as a wake-up smoke, as I’m one of those people with precious few brain cells to spare in the pre-dawn hours. The flavors reveal a charming interplay with a good amount of nuance through the bowl, smoothly deepening thanks to the burley. The mouthfeel is hearty, lots of maltiness on the palate, and pairs exceptionally well with coffee and tea, as should be expected. A delayed-gratification technique can be employed to salubrious effect, and, despite my best attempts, no bite could be coaxed from it. The nicotine content is a refreshing medium, quite satisfying for a first smoke and enough to see you through until the lunchtime blues set in—just in time for the next entrant in the series.

Room Note: The room note seems to extract only the lightest and brightest notes, evoking much of the baked bread sweetness and just an allusion to the campfire smokiness of the Latakia—think of the toasty graham-cracker aroma of a freshly-madeS’more. 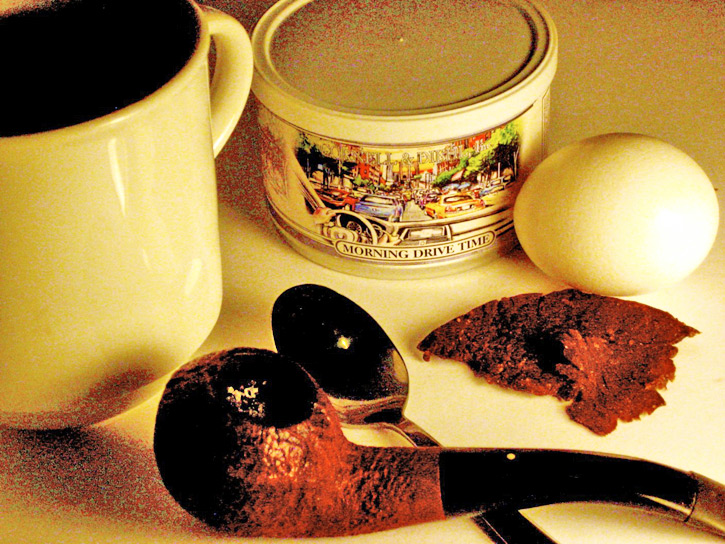 Cornell & Diehl’s signature cartoon illustrations easily win me over; there are so many little details to be found within that it reminds me of childhood perusals of the cereal box. Extra points on presentation for the Brooklyn Bridge in this one—14 in total.

The draw and burn were a little fickle until I found the right balance between ambient humidity and the tobacco, but once that was fixed it was easy to dry it to the right level to allow nearly relight-free smoking—31 points.

For a mild Latakia blend, Morning Drive Time has a lot of plusses in its favor: excellent balance, a fair amount of nuance, an intriguingly mild room note and a complimentary highlight of Perique. It doesn’t have the complexity of other blends, particularly with an Oriental component, but it doesn’t need them here. It’s a well-deserved entry into the pantheon of perfect morning smokes with 41 points on the flavor + aroma score.

Cornell & Diehl produce nearly 300 blends, and if I live to 100 I’d be hard-pressed to make my way through them all. I haven’t fallen in love with every one that I have tried, but with the ones I’ve become enamored of I’m smart enough to stock up on. MDT is certainly guaranteed a place in my cellar now, and for a mild light English it’s a solid choice for yours as well. Just be sure to leave enough for Andy.

In the vein of…