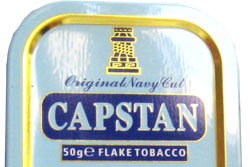 This particular tin became lost some years ago, between moves, breakups, job switching, and I had forgot about it. I shifted a box amongst some belongings and a small, blue anchovy-tin looking object tumbled to the floor.  I suddenly remembered my friend Anna in Finland sending this to me.  I realize this version of Capstan wasn’t commonly available here in the US a while back, and this particular tin has seen some mileage.  It isn’t the current Mac Baren incarnation, but apparently made under license in Denmark for Imperial Tobacco.  Regardless, this is a review more for nostalgia, as well as perhaps an indication of how well this tobacco managed to age.

I always have a tinge of concern when I pop an all-metal, brass tin open and there’s rust. Sometimes this means the tobacco is compromised, sometimes not. Fortunately this time things seem to be okay: the contrasted, calico flakes sitting inside had plenty of moisture and a nice smell of wood detritus, fruit blossoms and a touch of fermented Virginia tobacco.

The snow for the month has turned to rain, but this made my job all the easier. Rain resets the senses in the desert, with fewer ambient factors to impede flavors and smells. The Capstan seemed to do well smoked with increased humidity. First lights were always consistently lively, a little spicy and what those-who-know will understand when I say, “The kind of natural sweet only a real Virginia tobacco can give.” Roughing up the thin flakes creates a very fine, shaggy cut that is a joy to load into any pipe. I can’t recall one instance it did not smolder with more than two flicks of the lighter or two matches.
The first quarter of the bowl opens up the world of Virginias that had been slumbering patiently for me while I forgot their dignity. Not holding a grudge, the rewards became evident. The mouth feel of the smoke is silky, the flavors are deep with an umami quality, meaty but not overwhelming, and just enough of a thin spice to keep it interesting. 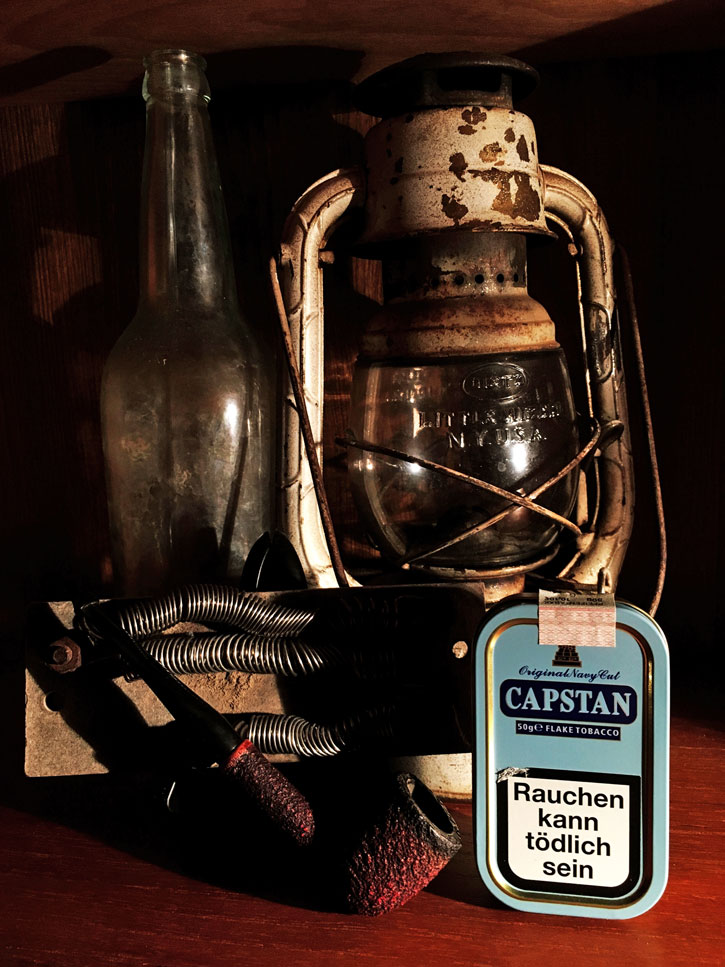 Midway through this poor, orphan Capstan a warm, Irish stout kind of quality comes through. It’s a tad sweet and yeast-like, and wholly enjoyable. What is also both a benefit and drawback comes about too: this tobacco is a ghost-hunter. If your pipes are not clean, or at least earmarked for only smoking subtle-natured tobacco, it will pick up on other things in the bowl that aren’t there. In one pipe I had, years ago, loaded up a Lakeland-scented tobacco that I had not known was such. After spitting and cursing at the tobacco and scraping my tongue, I did a very thorough job of ridding this demon from this particular pipe. I was safe: until one bowl of Capstan. I muddled through.
Finishing qualities of this aged treat are yearning. It fades pleasantly rather than getting unruly or ashy, and though I enjoy a good tarry bottom-of-the-bowl experience, this wasn’t to be had. Which is good: I was told once with things wonderful and pleasurable to never fulfill yourself completely—be left wanting a little more, and have some at another time. Capstan this aged, which I’m guessing is at least seven years, does this almost automatically.  I’m grateful for it being a patient teacher, if not a reminder. 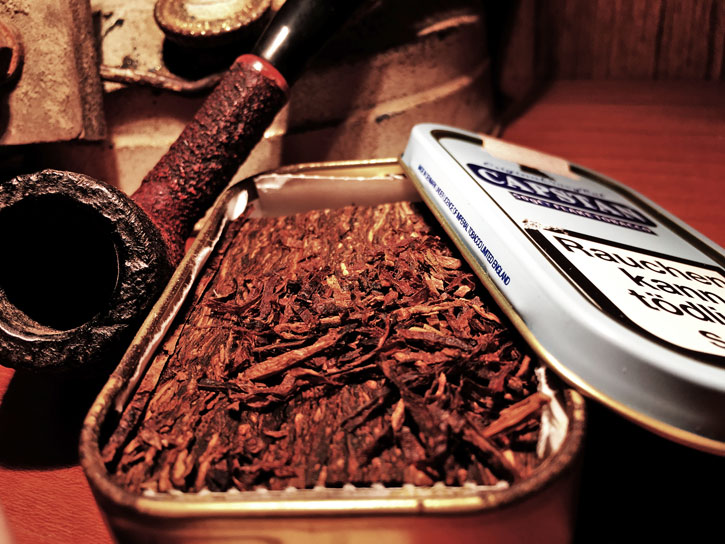 My verdict on this import tin of Capstan Flake is glowing.  It came to me at the right time, falling into my lap, nearly literally, at a moment I could use the break from life’s drama.  I welcomed it.  Nicotine is just right for me in that it is plentiful without being a head-spinner, the taste was well-rounded at all stages of smoking in just about any pipe. It didn’t get stellar marks by others for having the best room note, but I never got “the look” of wrinkled faces and noses. Being my first time getting acquainted with Capstan, I can only hope what is out there currently via Mac Baren is just as good (and well-aging) as this.  I’m dubious, but it’d be nice.  It might be a good idea to keep a few of these stashed away to be found later, if not by accident, with purpose and intent.  I may never see this version of Capstan again, so I might as well enjoy what I have.  There’s probably a life lesson in there, somewhere, along with keeping better track of my own tobacco.
Editor’s note: Capstan Blue was being made by the Orlik factory (Scandinavian Tobacco Co.) when I visited the factory in July 2010. Below is a photo where I am holding the tin top in my hand. I was lucky enough to bring a couple of these home with me, and to get them without the nasty warning label. 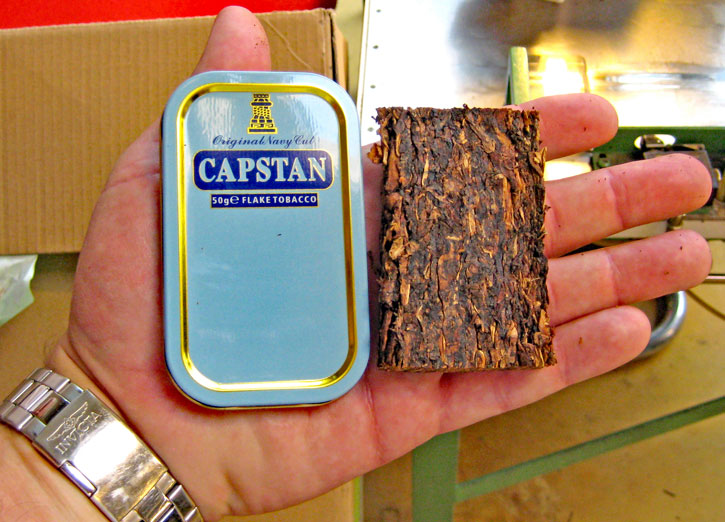 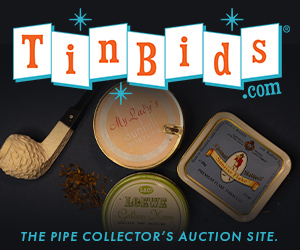