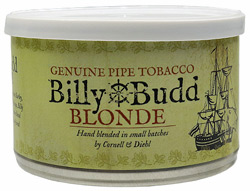 Being both apprehensive and excited about the news of an additional "Billy Budd" offering by Cornell & Diehl, I took my time once a tin arrived. It’s been hot this summer and in the West, the fires have been destructive and have made the air tough to live in. Waiting for the days to be clear enough to read and write let alone taste the tobacco was challenging. I can’t complain too much, but at least us Westerners don’t have to deal with tornadoes or hurricanes.

It’s daybreak here in sagebrush country, gifting a stillness to the crisp and clear air. The respite from the heat and smoke have the Cooper’s hawks nesting nearby in a noisy kerfuffle, as their two petulant fledglings learn to fly and hunt. They are causing amusing havoc with the resident quail. My tomatoes are watered and ripening, and I have coffee and C&D’s Billy Budd Blonde smoldering away in a cob. Most importantly, I can sit comfortably and do my job of opining about this new blend.

"A blend of bright Virginia flake, white Burley, chopped cigar leaf, and a touch of Perique, Billy Budd Blonde is a sweet sequel to the blend originally created for C&D’s late friend Sailorman Jack," the somewhat boring tin reads. Will it hold up like the original, though? 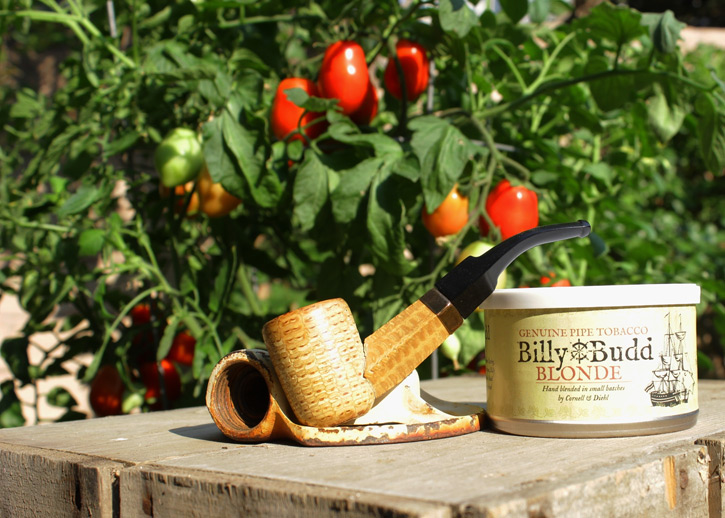 I have no issue repeating the answer to the question, "What is your favorite tobacco?" when it comes my way. The more often than not I reply, “Billy Budd”—it’s not my top overall choice but it often gets frequently chosen. It has been this way for quite a few years now. The original differs greatly from this new product, being richer and having a Latakia-lean to the mix. BB Blonde is a "VaBurPer," which is a fun thing to say, with the intent of a lighter, fresher smoke without the Latakia. In the tin, this new tobacco has a curious makeup. There’s obvious blobs of pressed tobacco mixed with ribbons and rougher-cut chunks. It suggests part of these tobaccos are pressed and then mixed with the cigar leaf later. Unlike the original BB, the smell is diminutively sweet and a little tart.

When I first started loading bowls to smoke, I was taking time to break up the pressed leaves and mix them more evenly with the rest. This proved futile, as one morning I mindlessly loaded a bowl as I would most other tobacco. There was no change in flavor or performance. Lighting is an easy task and immediately the smoke delivers all of the flavors of the bright Virginia and the Perique. There’s a fleeting natural sweetness that goes away as quickly as it arrives. I’m pleased to say the Perique is applied smartly, as there’s just enough to tingle the nose and the tip of the tongue. Holding this together is the nutty smoothness of some damn good Burley, which is high praise from me. Burley has the tendency to be love or hate in a mixture, and this too is balanced nicely. These qualities hold steady and true until at least halfway through the bowl, where the Virginia loses its citrus poise and leans grassy, the Burley mellows to a hush and the Perique peppers the tongue in a subdued manner.

At the halfway mark there’s a consistent calm in the smoke, and I found myself getting consistently lost in the act of smoking itself. This is an important aspect for many, myself included, because the only and best distractions while smoking should be pleasant observations and pauses of noted enjoyment. What once was citrus and buttery goes to savory and almost pine-like. There’s no trace of sweetness, but there’s also nothing astringent or bitter. The trade-off is the liveliness of the smoke diminishes during the middle point, and if you like the punchier, fresher flavors in the beginning, I suggest choosing a smaller pipe and partake of a reload later—you’ll be happier. 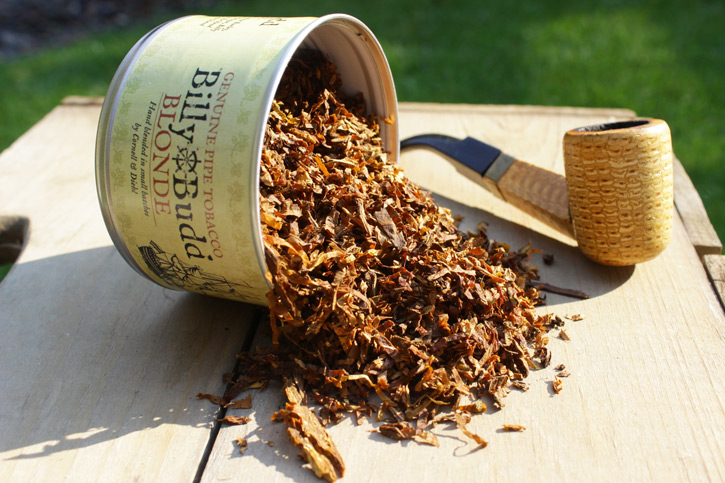 Three-quarters to the end, Billy Budd Blonde lounges further in an even mellower experience than the middle. With the volume turned down this far, I found myself wondering if I was smoking at all, and looking with slight frowns into the bowl. Much like Bette Midler singing Peggy Lee about life, "…is that all there is?" Normally my smoke-to-the-heel-of-the-bowl satisfaction is a thick and robust experience with Billy Budd original, while the Blonde fades into the ethers. It’s a nice change.

My conclusion about Billy Budd Blonde is this: First, it has big boots to fill (for me, anyway) compared to its older and stouter brother. Those looking for the bold, tarry, smoky and more nicotine-heavy experience may be disappointed. Second, the more submissive nature by comparison to the original is a good thing because it should be different, and the tobacco is justified with a utilitarian-yet-quality character. It holds its own without being troublesome. Lastly, this tobacco can join the smoker for quality downtime at any point in the day, with just about any beverage or experience, in any sort of pipe chosen, which makes it flexible–especially sharing the trouble-free performance of its sibling. This is the spirit that made the original tobacco such a hit with yours truly. Add to that a mellower nicotine experience and a good room note, this could very well be a hit with many out there. My one criticism is I believe some aging in the tin would do this tobacco a great service and may spread the flavor consistency through each bowl thusly.

C&D did a good job with this one, and I hope it does just as well as the original. Time will tell if I put it into rotation religiously. Billy Budd, the original, is one of those tobaccos I can’t explain why I go for it as frequently as I do. It’s uncomplicated, unpretentious and not particularly refined. It’s more trusty old hammer than it is a beautiful painting. It also tends to be something I go for in cooler months, which I hope hurry up and get here. For now, however, Billy Budd Blonde will be a lovely newcomer to enjoy through late summer. I hope to get to know it even better in the future.