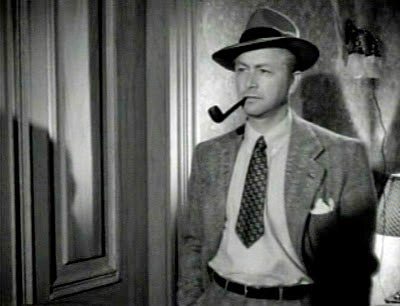 Those of us who have been around for 6 plus decades remember well when smoking in all forms had a level of acceptability, and pipes specifically had an air of respectability. Pipe smokers were generally looked upon as contemplative, calm, thoughtful, careful to make the correct decisions. Pipe smokers were also ones who cared how they looked and in general considered respectable Gentlemen.

We may be out having a quite smoke and have people come up and tell us that the smell reminds them of a grandfather or some favorite uncle.

It’s not surprising that companies catered to that image with products and advertising that promoted those descriptions.

Now where are we going with this?

If you are near the same vintage as I, you probably remember the decorative bottles of shaving lotion produced by Avon. Bottles in every shape, size and description. The most popular and most remembered were the bottles in the shapes of automobiles. From the 1908 Oldsmobile to the "modern" American sports cars of the day. There were hundreds of different shapes.

My spouse and I like to frequent estate sales; often I would see and pick full or unusual Avon bottles that struck my fancy. I was not a collector, I just happened to like the scents within. Plus being a bit on the frugal side, who can turn down a bottle of shaving lotion for the princely sum of 25 cents.

At one sale, I noticed several bottles, one of which was in the shape of a smoking pipe. So I just had to grab that one, which tweaked my curiosity and later spurred my quest.

A few decades ago when the Marlboro Man sat high in the saddle, a personal care products company was actually making products that praised the pipe smoker.

Contrasting today’s anti-smoking climate where smokers are not only chastised, but condemned and blamed for everything from foul odors to various sicknesses caused by 2nd, 3rd and give it time … 4th hand smoke to those who are ready to blame climate change on the poor smoker as well.

As I mentioned, because of the change in culture, I began a quest to learn about this line of products as well as try and collect them.

The information I have been able to research is very thin and may not be exactly correct and subject to update but it is what I have so far. There are also many variations as well as different scented aftershaves in the bottles. So trying to collect every variation would be a challenge.

The first Avon Pipe bottle was called "The Pipe Dream" and debuted in 1967. The bowl is in the shape of a clowns face. It was a dark amber colored glass with a tan base. There are some examples of a clear glass, but those are very rare and I am on the lookout for one. This pipe also has a tan plastic pipe rest. 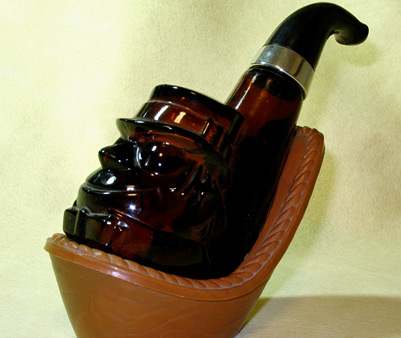 In 1971 -72 "The Pipe Full" a straight Apple shape, came out in two colors Brown glass with a black stem and Green Glass with a brown stem. 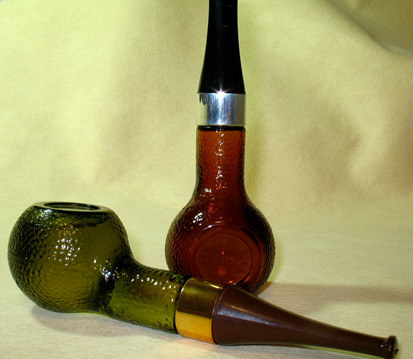 In 1972-73, were the "Dog" years; The Bloodhound pipe, yellowed ivory glass with a black stem. Along with the Bull Dog pipe in milk glass, also with a black stem. Both stems had a "silver" band. The Bulldog was on a Sherlock Holmes theme.

In 1973 and 1974, two wildly different pipes came out. First was the "Dutch Pipe" honoring the pipes from the German/Dutch era of full bent porcelain pipes with the blue "handpainted" scenes. This was in milk glass trimmed in "silver" with a windcap.

The second was the "Collectors Pipe". This was a straight shape resembling a carved face pipe. The face resembled a Union soldier of the Civil War era. The "Collector" was in dark brown glass with a black stem and a gold colored band. I also have one with a tan stem, so variations are very normal. 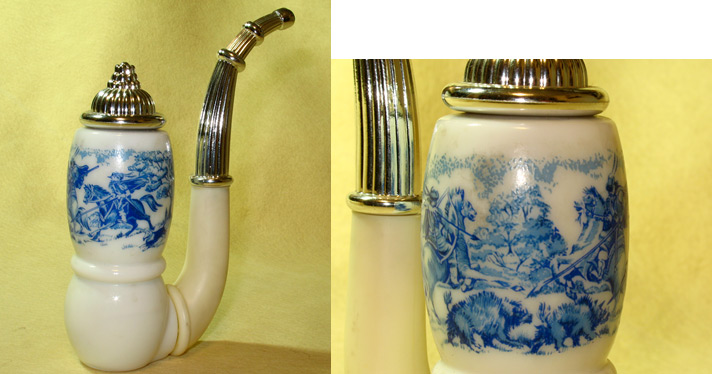 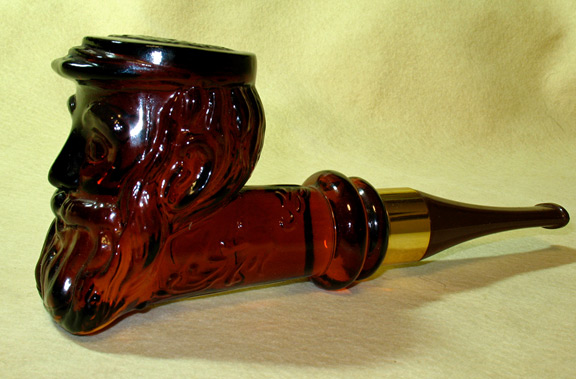 1974 and 1975 was a triple pipe year. The American Eagle Pipe a full bent with dark amber glass, black stem and a gold colored band and windcap. 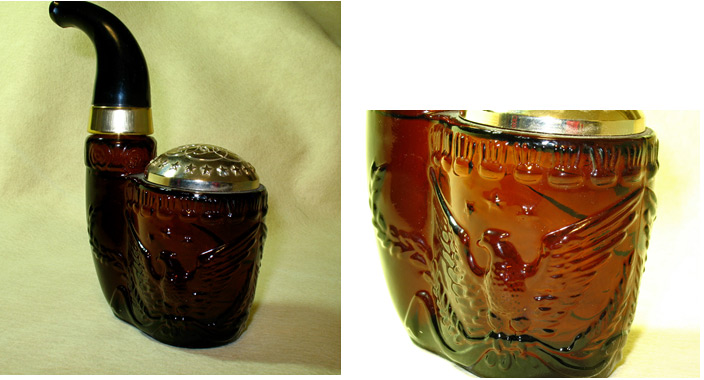 Next is one of the most unusual pipes in the collection, the "Calabash Pipe". From a few feet away, this looked like the real thing. The body was painted to match a real gourd, black stem and white "meerschaum" bowl. It came with a special stand to hold it in an upright position. Unfortunately, the one I have does not have the stand, but I am on the lookout. 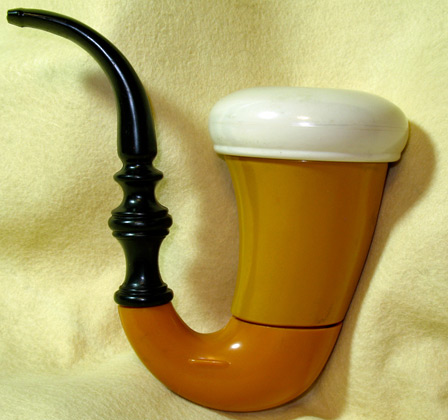 The third from those years were the "Corncobs". The bowl is molded in the shape of a corncob with a black stem and gold colored band. On the box is a short history of the Missouri Meerschaum Company in Washington Missouri. 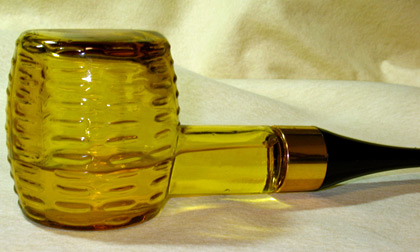 1975 and 1976, the decanters made a tribute to American history and the Bicentennial. Two straight pipes; The first was a nod to the "Pony Express Rider" with his windblown look and turned up cowboy hat. This was in milk glass with a black stem and gold colored band. 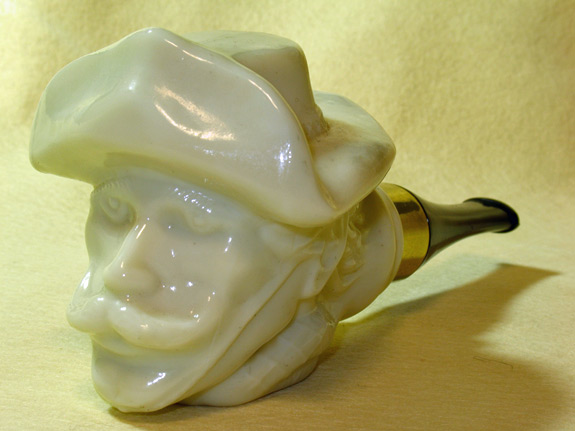 The second was recognition of good old "Uncle Sam" with a star-studded top hat. Also in milk glass but with a blue stem and gold band. 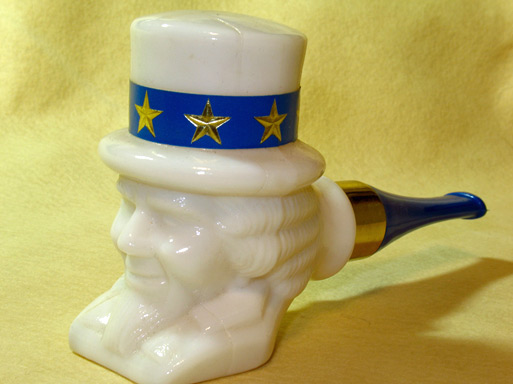 In 1976 and 77, only a single pipe was introduced. The "Wild Mustang" pipe in a milky white with an amber stem. 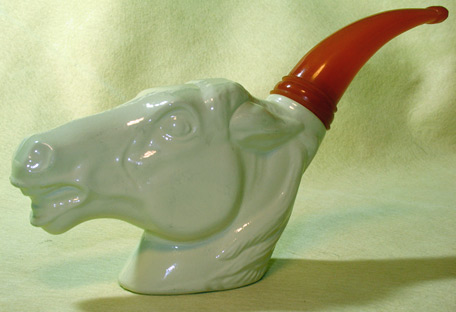 Finally in 1978 and 79, we come to an end of this journey. The pipe introduced this time was not a decanter full of aftershave, but the "Fresh Aroma Smokers Candle" in the shape of a full bent. 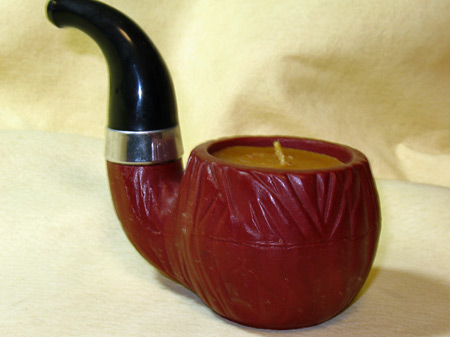 Putting this set together has been a learning experience of the evolving American culture. Knowing that only a few years ago, pipe smokers were not banned from the public eye as they are today, but were welcomed and celebrated. It will be interesting to see what the future holds for us.