How refreshing it is to see, let alone a public figure, but a presidential candidate that dares to smoke his pipe in public, and have the newspapers capture it. Now that’s the good ole’ days brought back to modern times!

The January 25th Wall Street Journal had an article about the Czech Republic presidential race with a large photo of the 2nd place contender, Karel Schwarzenberg smoking a pipe. He is not just posing. He is actually smoking. You can see the smoke rising around his head, there are several other people in the room, and not one of them is confronting him about his pipe smoking.

Hallelujah! Praise the Lord! There are still small, tiny, little, infinitesimal pockets of sanity in the world when it comes to smoking.

This was sent in by Composer and pipe smoker Dan Locklair. Dan said; "How refreshing to have a distinguished current political figure photographed with his pipe AND the newspaper to show it with pride!"

It’s quite interesting that the article says; "But one of the main reasons his backers believe he is more likely to be honest is that he is rich-and therefore above seeking financial benefits from his office."

That sentiment sure didn’t translate to the last US presidential election.

Here is the article and photo from the WSJ. Click it to enlarge. 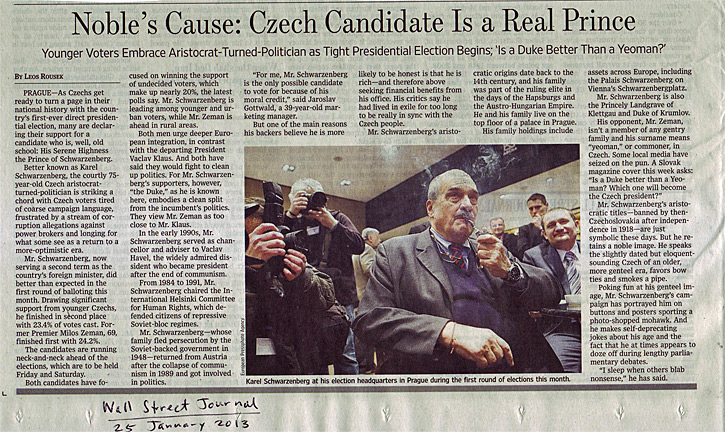