As another year draws to a close I sit, stoking my pipe in deep contemplation over the lyrics of Auld Lang Syne, that most famous of Burns’ little ditties.

The pipe I’m tending is a Missouri Meerschaum, and fittingly it’s an old one, from the late 60s or early 70s; it was a small token of appreciation from a client for a job well done a few years ago. An ‘auld’ acquaintance, one whom I may never see again in all honesty, but she is remembered every time I light the pipe up and think of the story of it coming from her father’s collection to me. He had been quite a piper, gone the way of all flesh, and she had long held on to many of his personal effects. The aroma of my pipe smoke as I took breaks from her apartment renovation touched a soft spot with her, and she even began to get a little misty-eyed when she offered it to me, relating the sense memory of sitting on his lap, wrapped in the warm and comforting aroma of his tobacco. It’s a small thing, a trifle, with no real monetary value, but this well-worn pipe is one of my most cherished, for within its chamber resides still the breath of a daughter’s father, and her love for him. I’ll not forget my time spent faithfully restoring her family’s landmark residence in Manhattan’s West Village; this pipe will forever bring it to mind. 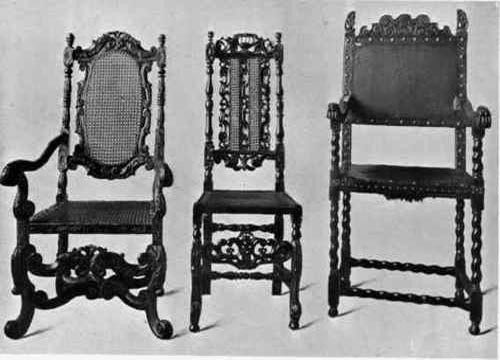 Chairs of the Dutch style Henry Tibbe would have been making.

One could imagine the balmy autumn of 1869 when Henry Tibbe did a favor for his friend, neighboring farmer John Scharnke, which would change the pipe world. Tibbe was a woodwright, making furniture and wooden wheels in his small workshop, and importantly, he had a lathe. Scharnke came to him with a corncob he’d whittled into a serviceable pipe, and asked if Tibbe could improve on the design with his modern machinery. Ulysses S. Grant was our president then, and the Golden Spike was driven in the rails of Promontory Summit, Utah, connecting the First Transcontinental Railroad. It was also the year the clipper Cutty Sark was launched out of Dumbarton, Scotland; so, in the spirit of remembrance, I pour myself a dram of the eponymous Scotch and pack another bowl of Sterling’s VaPer blend.

And we’ll tak a cup o’ kindness yet,
For auld lang syne 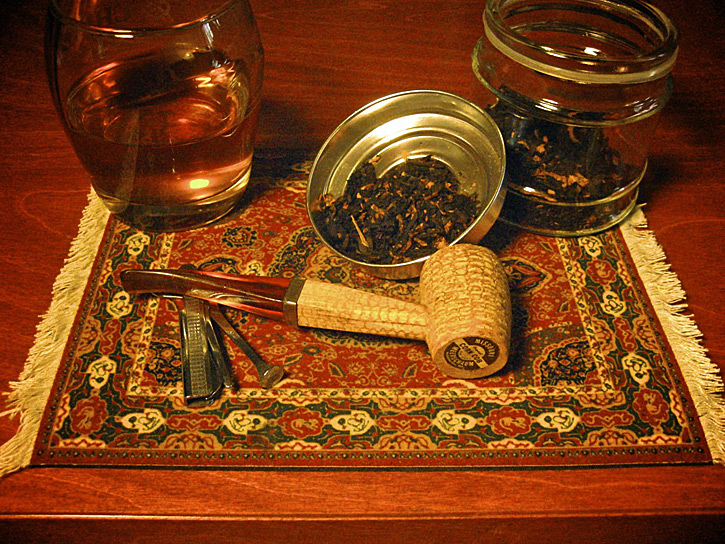 Tibbe further collaborated with a local apothecary, Ludwig Muench, formulating a plaster of Paris-based slurry to coat the corncobs with, and thus the Missouri Meerschaum pipe was born. They sold like the proverbial hotcakes, retiring Henry from furniture making and launching his career as a pipe maker. In less than a decade Tibbe’s business had expanded so rapidly that he applied for a patent, along with his young son Anton, for their invention in the summer of 1878. Edison was patenting his phonograph and incorporating his electric light company, while a fellow named Thayee in Massachusetts was patenting a catcher’s mask for the rather new national pastime of baseball. Also of note to pipe smokers, Greece declared war on Turkey that same year, one instance in a long history of unrest for the region. With the perspective of time as my luxury, I imagine these developments were discussed and debated at pipe clubs and smoking parlors by gentlemen in smoking jackets, while surrounded by wood, leather and the fragrant haze of tobacco. Smoking was part of our national identity then, enjoyed by all classes, and much more a part of the fabric of socialization. 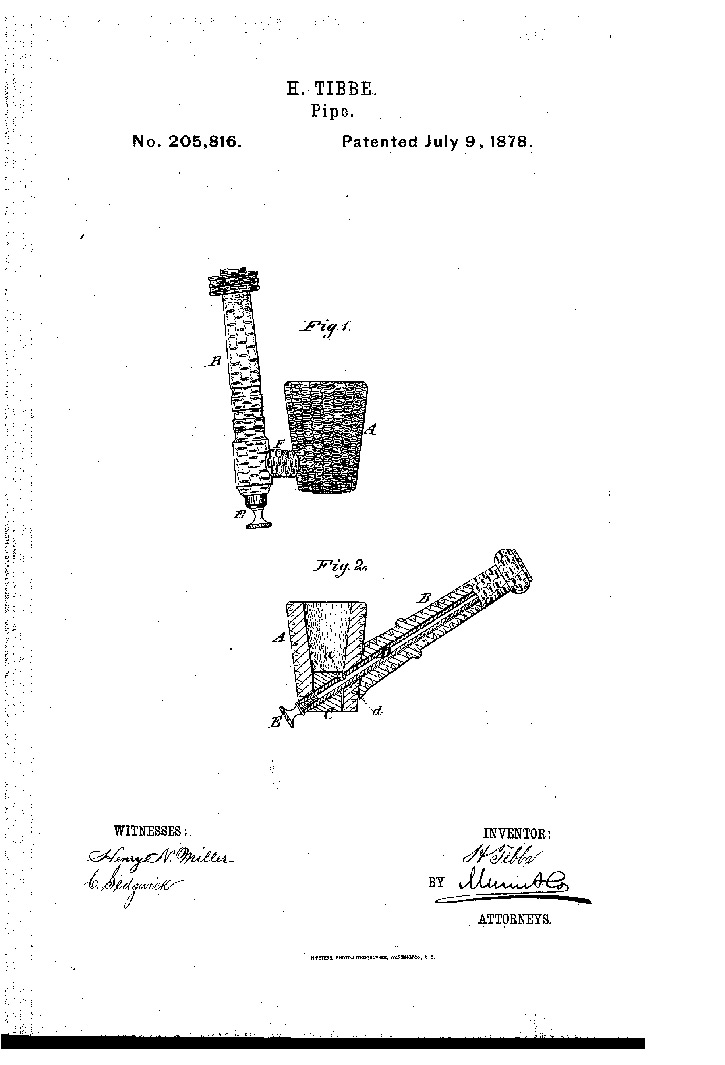 We twa hae run about the braes,
and pu’d the gowans fine;
But we’ve wander’d mony a weary fit,
sin auld lang syne

Train travel is what opened the interior of the country to our insatiable expansionism, and the rail lines had found their way through Washington, Missouri in the winter of 1855. Sam Clemens, a twenty-year-old cub reporter for the Muscatine Iowa Tri-Weekly Journal, made brief note of the event; years later he would correspond personally with Tibbe, and it is well noted that he held the “lowly cob” in high regard, both as a personal preference and as part of his carefully-crafted persona. A few years later, in 1883, the Tibbes officially registered the name “Missouri Meerschaum” for their pipes. The operation had grown so much they moved to a manufactory just down the street from the depot; the business’s third and final home. It’s still in operation, still with the Missouri Meerschaum name emblazoned in big, bold letters across the side of the brick building. LIFE Magazine was founded that same year, and Edison patented the gramophone while he wasn’t busy stringing wires above the streets of Roselle, New Jersey, proving he could light a city with his new-fangled electricity. The Tibbe family would, decades later, build a power plant to supply the pipe factory and the rest of the town with Edison’s electric current.

Sixty-two years later, in May of 1945, LIFE magazine got around to doing a short pictorial on the Missouri Meerschaum Company, then owned by the Otto family. General MacArthur is prominently featured in the LIFE magazine article, and is one of the handful of notables that are commonly associated with the pipes, along with Mark Twain, Frosty the Snowman, and PipesMagazine "pipe babe" Chelsea. The world was at war and changing rapidly, but the manufacture of corncobs had changed little since the Tibbe family had founded their business. There were some new machines, many of which are still employed in their production—it’s a decidedly low-tech operation. Perhaps the biggest change came in 1950, when Dr. Marcus Zuber, a research agronomist at the University of Missouri at Columbia, developed a hybrid of corn that was better suited to pipes, with a denser and larger cob. Also in 1950, Joltin’ Joe was slugging for the Yankees (who would sweep the Phillies for the Series), Truman was president, and MacArthur was placed in charge of the UN forces in Korea. 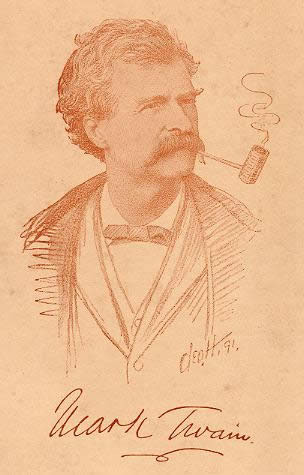 The Great Prevaricator, pictured with his Missouri Meerschaum, dated 1891. 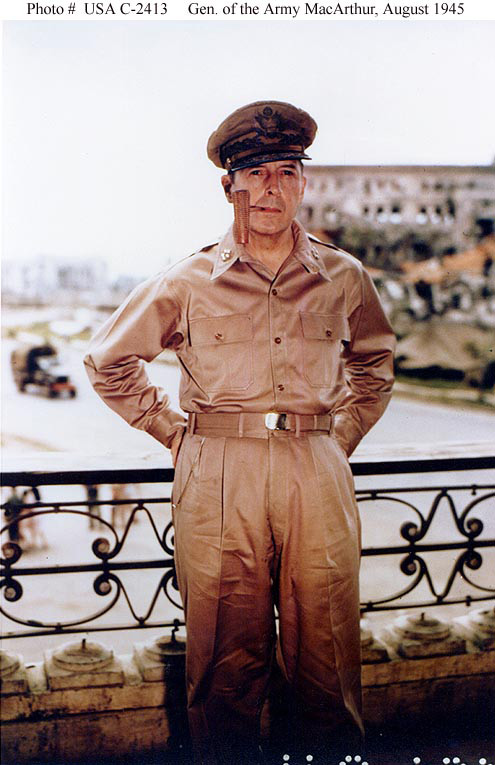 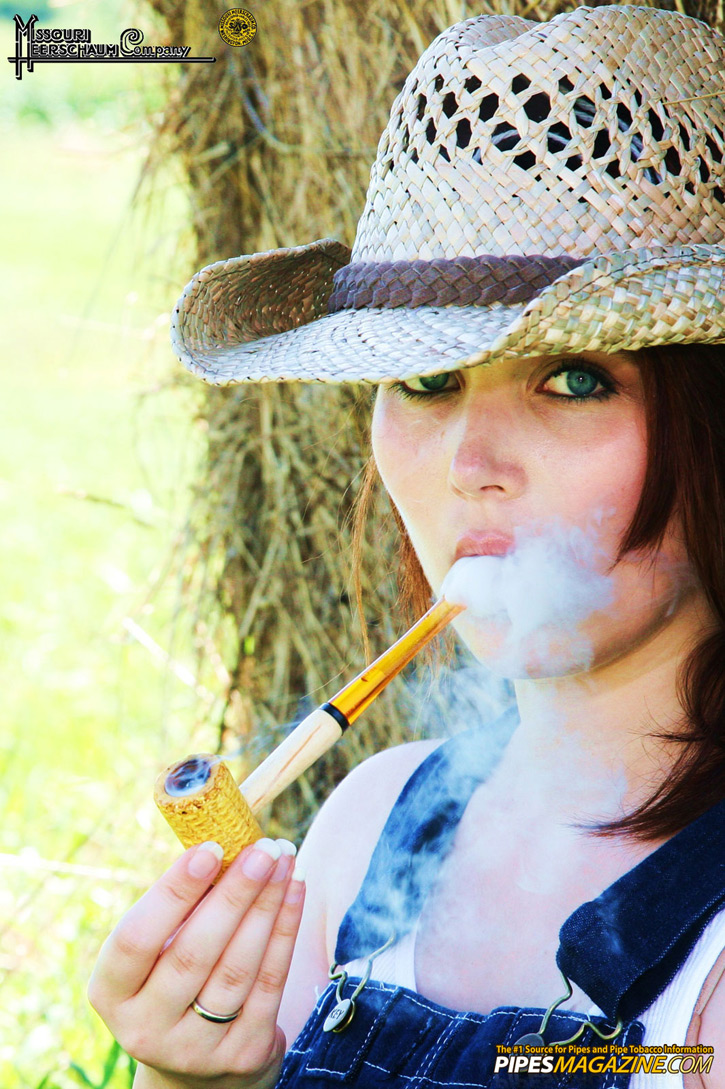 Another sixty-four years have passed since then, only to find me ruminating on these tidbits of historical trivia as I consider the new year. There is something about being a pipe smoker that connects us to the past; not just our personal past, but also our collective past. As modern pipe smokers, we are often reminded that our hobby seems antiquated or anachronistic to those who do not partake. I choose to remember that I’m merely a continuation of the history of pipe smoking, connected to all that has come before, and steward of all that is yet to come. In the 145 years since Missouri Meerschaum corncob pipes came into existence, a lot has changed in the world at large. One thing that hasn’t changed is the quality of contemplation that accompanies a smoke.

And there’s a hand, my trusty fiere
And gie’s a hand o’ thine
And we’ll tak a right gud willy waught
For auld lang syne