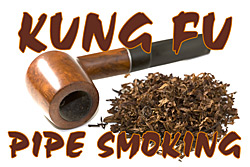 If you’re anything like me, you spent at least one bowl this last week wishing you were in Chicago and enjoying the glory of shiny pipes and tobacco samplers. I like to imagine it’s a place where flake tobaccos pave the roads, rope tobaccos hang from trees like willows, and ribbon-cut tobacco covers the ground like moss. Tins of glory are everywhere for the taking and pipes grow as the flower of the briar tree, free for the picking.

Alas, I didn’t make it to Chicago, and a ticket from China costs me a bit more than I’m willing to pay at this point to attend the gala (maybe next year?). But while the most significant people in the world of pipe smoking are all gathered in one place and hobnobbing, I can still sit down with a pipe-making hobbyist and enjoy a bowl. 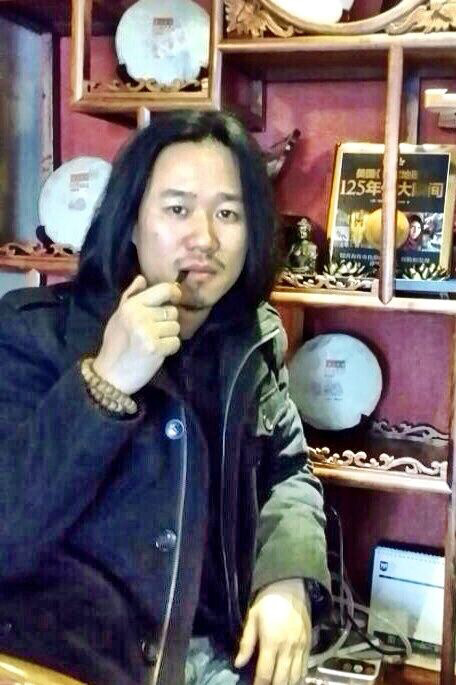 Today I’m with Wolf Zheng in his back office at the home-theatre design company he owns. Sadly we’re in one of the few places in the world where his windowless office is actually less depressing than a view of the outdoors. A friend of his recently gave him a very-aged tin of Ridgeway tobacco made by/for A. Garfinkel, Inc. and he’s been saving the tin for me to be the first to try. At first it’s a bit flattering, and then upon seeing the small bits of rust on the tin and the dryness of the tobacco I have a slight suspicion he may actually be using me as a test-rat to make sure nothing deadly had fermented inside. Nonetheless, I gladly partake and fulfill my role with abandon.

Apart from being on the receiving side of some pretty epic tobacco gifts, Wolf also spends his spare time making pipes. While people have offered him money for his pipes, I refer to him as a hobbyist because he’s (thus far) never been willing to sell one, instead he just gives them away to friends. The truth is, he makes too much money running his own business designing and building smart-homes and home theaters to turn full-time pipe maker.

What makes Wolf interesting compared to the average American pipe-making hobbyist is partly his Chinese viewpoint on pipes, and partly his three square meter workshop. For while many American pipe smokers may be able to light up a pipe and wander slowly out to the lathe in the corner of a two-car garage, Wolf makes all his pipes on his no-bigger-than-a-small-closet porch, on the 30th floor. An apartment as big as his is actually already rather large for a big city like this, but finding space for a lathe is nonetheless an impressive feat.

MORE READING  How to Smoke a Vegetable 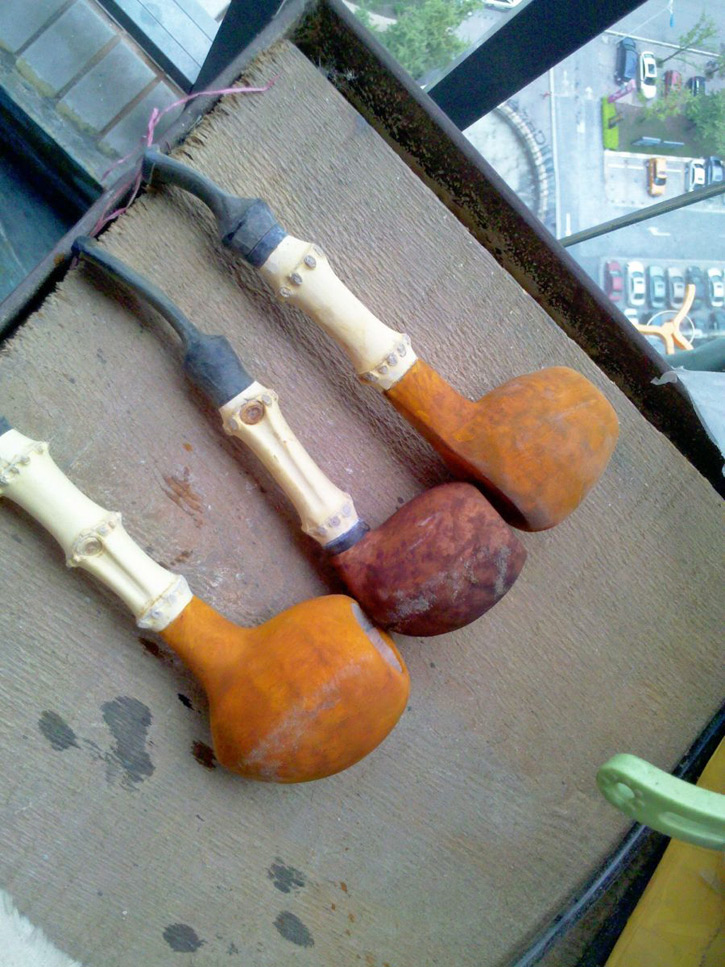 For Wolf, pipe craft began with his very first pipe. After smoking both cigarettes and cigars and finding neither suited his tastes, a friend in Beijing introduced him to the idea of a pipe. Right out the gate he purchased a Savinelli (readily available) online for around $50 and began smoking. The wood intrigued him for a while, and then he decided to get his hands dirty. Instead of buying a pre-drilled briar block fit with a mouthpiece, he got started by refinishing the Savinelli. First by polishing away the dark finish, only to then realize it was dark for a reason (lots of small, filled imperfections). But this just pushed him to further research and then eventually rusticating the bowl. With a new beauty in his hand he was hooked.

Refinishing a few more pipes led to clamping his drill to a workbench on his porch and importing some Italian briar. After making five pipes very slowly through that method, he purchased a lathe in 2011 and whipped up a lovat.

Since then he’s been turning out pipes whenever he gets time. Wood, he says, is something with which the Chinese are very comfortable. He likens it to Americans driving cars. In America we watch our parents drive from a young age and learn to drive years before the Chinese are legally allowed. Getting behind the wheel for an American therefore, takes very little time before it feels natural. Likewise he says, as a Chinese kid he watched his parents work with wood, and played with it even when he was young. Manipulating it in to a pipe is easy and feels natural for him. 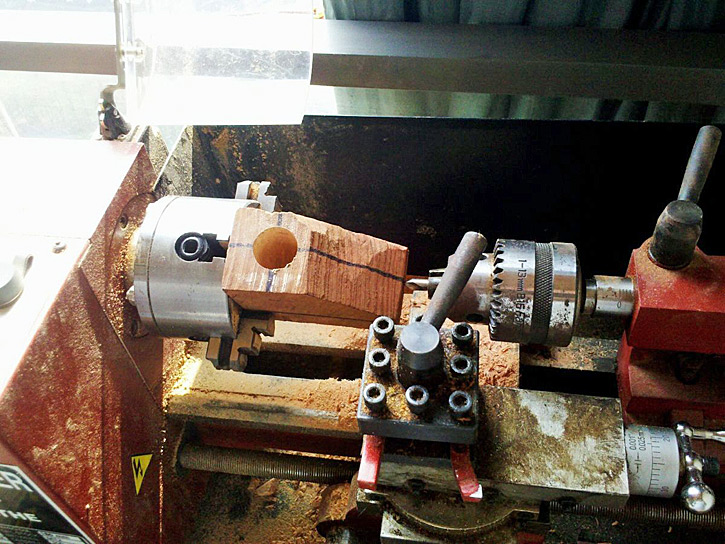 He continued learning and drilling enough pipes until he had a few throwaways, a few giveaways, and eight for himself on hand for regular rotation. Then one day someone broke in to his office, stole all his handmade pipes, a load of tobacco, and his computer and printer. He took to the internet to lament this event and a fellow pipe-smoker responded, “Just think of it as though you donated eight new pipes to eight new pipe smokers, with some tobacco to boot!” He laughs while he tells me this story and says, “Okay great! Now what about my computer?”

It may well be there are eight Wolf Zheng pipes out there on the estate market right now, stolen from that original batch.

Over time Wolf has developed a taste for a specific kind of pipe, and as a maker is able to tailor each to his own tastes. He comments about this carefully, knowing there are rules and unspoken laws in pipe making that he is free from adhering to because he makes the pipes for himself, not to sell. For one, he prefers very thin walls on his pipe. “I like to clench,” he says, “So I make pipes the best I can for clenching.” This means from the use of a bamboo shank to the weight of the briar to the shape of the bit, everything is tailored accordingly. He even jokes that he makes some of the only pipes for a person with an underbite (himself), a slightly unusual bit perhaps, but nothing suits him better. 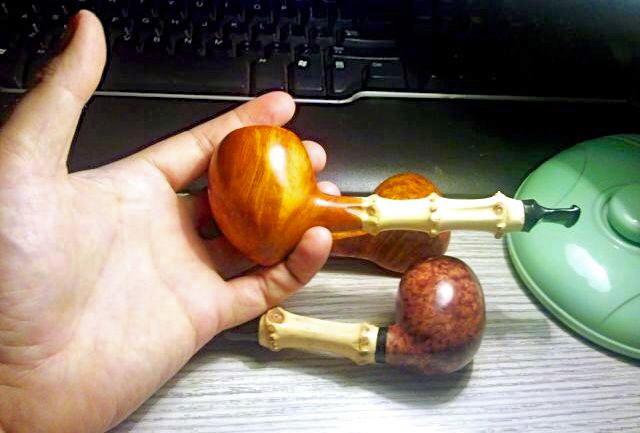 Over the years he has given most away (and had a few stolen) but has hung on to about 10 pipes which he keeps in his regular rotation. I’m sharing some C&D Opening Night with him and we sit back to enjoy our smoke. He continues to tell me more about bamboo and his love for it. By his own admission the mere fact that he’s Chinese makes him feel some special love for it; it’s just a bonus fact that it’s actually a great material for a shank.

He serves me some aged pu-er tea and I ask about his love for the tea ritual (literally ‘Kungfu Tea’ in Chinese) and how it informs his pipe smoking. He agrees the two have many similarities, there being something about the ceremony—the ritual nature—of both which draws people to these hobbies. You can just throw tea in a glass with hot water and drink it, or you can pour it in a clay pot, wash the leaves, then steep them again and filter the tea to a small pitcher before pouring it in to small porcelain glasses. Likewise you can throw tobacco in a pipe and smoke, but many of us have a slower considered process of sitting down to select our tobaccos and then a suitable pipe (or the other way around) followed by slowly packing the tobacco through one of many different methods. Then we sit back to light, relax, tamp, and then re-light. At this thought I press him to consider referring to a very ritualized pipe-packing and smoking ritual as ‘Kungfu Pipe Smoking’,* but he won’t let me go that far. He does, however, share some principles for tea-pairing with pipes. 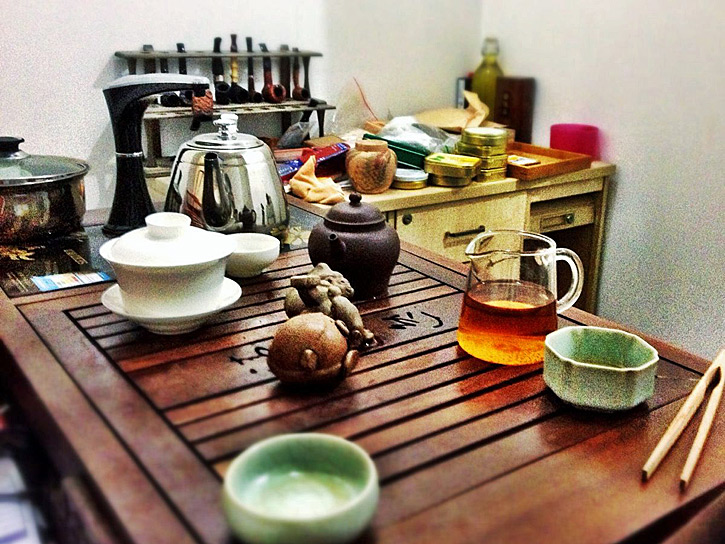 Similar to things I’ve heard before, he suggests red teas (we call them black teas) and fermented teas, with their earthy flavors, are better suited to Latakia blends; and green teas, with their grassy fresh, flavors are better suited to Virginias. It’s hard to disagree, and he spends every day smoking this way. I personally find adult beverages help me better maintain a reasonable blood-sugar level alongside the nicotine, but to each his own.

The afternoon slowly fades in to a second and then a final small bowl. Wolf’s secretary stops in a few times to ask for a signature or an opinion for a customer and once or twice he runs out to shake someone’s hand or close a deal. It occurs to me that our pipes may not be from the magical land of the Chicago show, but at least Wolf doesn’t need to travel that far for a handcrafted pipe made perfectly to his liking.

*I don’t know about you, but when people ask me about the hobby I’d love to tell them I’m a Kungfu Pipe Smoker. No reason to explain, just leave it at that.