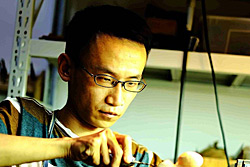 A week ago, through some unusual circumstances, I had an opportunity to make a pilgrimage to Pipe Mecca—Low Country Pipe and Cigar and the headquarters of SmokingPipes.com. For some pipe smokers with amazing brick and mortar shops nearby their homes, this might not have held the same significance as it did for me. As someone who lives in China, however, I get excited and press my face to the window when I pass a wine store with a single tin of MacBaren Mixture Flake on display for $30. This was essentially my first time in a real pipe shop since I was in college, and there were more pipes on the wall than I imagined possible. There were displays of tins and jars of tobacco in every direction I turned, and I literally giggled as I walked in circles trying to hold myself back. Eventually I made my way to a big leather couch to try to regain my composure, only to find there were more tins available on the coffee table for free sampling than I have open in my own collection.

Later I was shown around the new headquarters for SmokingPipes.com. Here at people’s desks were cabinets filled with more tobacco than my mind could process. There were unreleased tobaccos and trial runs of things which would never be released. This was a whole army of people who handled, measured, photographed, and shipped pipes for a living. My grin was almost embarrassing as I walked around and asked question after question about the marvel that is SmokingPipes.com.

While the vast majority of pipes I laid my eyes on were factory pipes, there were also a few opportunities to hold, or at least behold, an artisan pipe. Even as a self-confessed cob smoker, some of these pipes gave me pause and the twitches we all recognize as the onset of Pipe Acquisition Disorder. The store and headquarters awakened me to a tangible world of pipes: pipe makers, pipe sellers, tobacco blenders, and even pipe shops.

In China there are a few such shops beginning to open, but they are still extremely rare. The vast majority of community between pipe makers takes place online via chat services where people swap pictures and text, but seldom have opportunity to hand a pipe to someone who shares their passion for the art.

A few months ago I discussed some of these things while interviewing a man in China named Li Zhesong (Pronounced Lee Juh Sowng) who has been making pipes for the last four years. 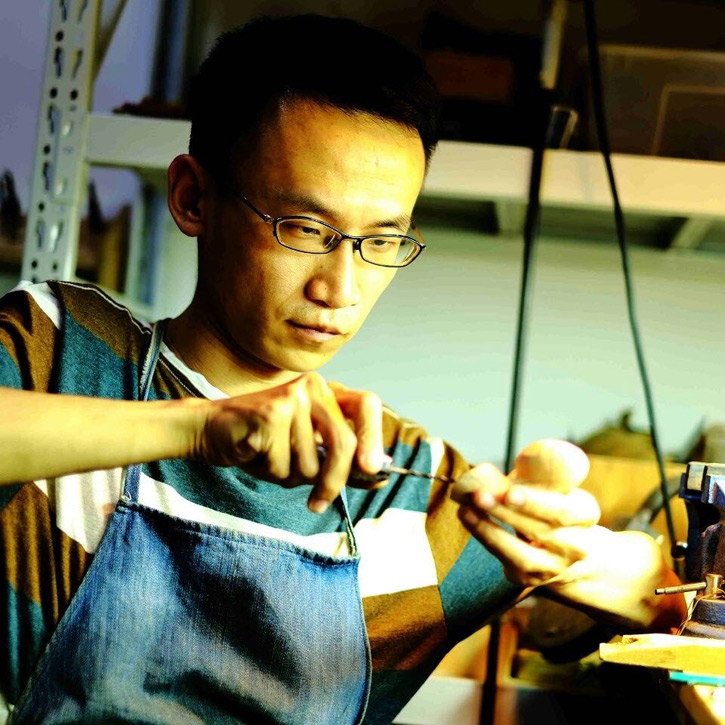 Li told me he got in to pipe making when he started buying estate pipes on the Chinese market and found they needed significant repairs to make them smokeable. He learned technique and what tools he would need through resources online, which is difficult in a country where Youtube and Facebook are both blocked. "I also went looking for books," he said, "but those resources were very limited as well. There was only one book available in Chinese on the topic [of pipe making] but it was terribly translated and full of flaws."

The resources available in America are astounding compared to what is available in China. Last week I was able to walk in to a store and see artisan pipes and even lay hands on quality factory pipes. There were people there who live and breathe (live and puff?) pipes and pipe tobacco and love to sit around and discuss smoking qualities and the art behind the pipes.

Of course it’s not all terrible in China, there are places like one shop in Shanghai which have become particularly well known. It was there that Tom Eltang came to visit, and this is what really launched Li’s career move to pipe making.

Li says, "I took my pipes down and showed them to [Tom Eltang] and he gave me some very helpful advice, as only an expert pipe maker could do. Of course a lot of what he told me was also just very encouraging. He said, ‘It is a good thing to be a pipe maker,’ and this simple phrase really encouraged me to persist in what I was doing. At this point I realized there was no down side to being a pipe maker, it offered a lot of freedom, and was the direction I wanted to go with my life. Even though I wasn’t making as much money as I could as an architectural designer [as I was previously doing], I decided that wasn’t important. It was good to be happy, and while this is something Chinese people say a lot, but very few actually do it. It was then that I determined I would abandon my previous career and become a full time pipe maker and in China this was a scary decision."

This last week at Low Country Pipe and Cigar, I realized it was this kind of interaction which has been missing in China. There are so few places for pipe smokers, pipe makers, and pipe enthusiasts to meet and rub shoulders. Although I have reason to believe this is changing fast. The brick and mortar pipe shops are beginning to pop up, but what we need now is someone to carry the banner for pipes. We need to see pipe shows become normal in several parts of China so the momentum there can grow.

Of course, lack of pipe culture begets lack of pipe culture. And this is what made Li’s interview so interesting. I asked him about the perception both in the West and even among Chinese pipe smokers of Chinese artisan pipe makers copying rather than innovating. 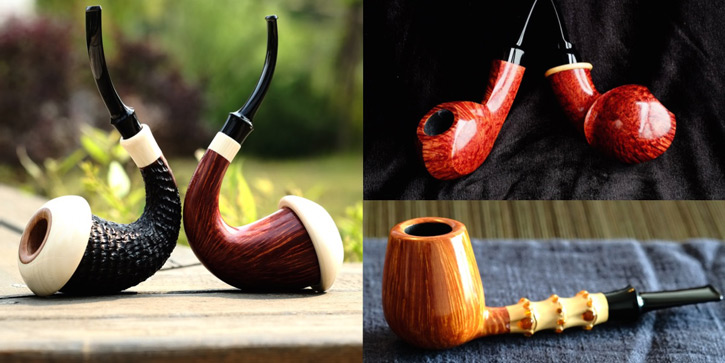 To this he responded: "This is a challenging question. It’s true the majority of Chinese pipe makers are making pipes in a style overtly copying others, completely lacking original design. This is something Chinese pipe makers must acknowledge as the truth. In my opinion however, pipes do not have deep roots in China, the materials are not created in China, and the cultural traditions around pipes are not Chinese. Moreover China does not have freedom of speech, our access to the internet is very limited, and this puts Chinese pipe makers at a significant disadvantage. We are students, and a student usually learns by mimicking his teacher."

And therein lies the rub, there hasn’t been much access to teachers.

He continues, "Pipes are a relatively new thing to China, they may not have even been here for fifteen years. Pipe makers have probably not been in China for more than ten years, and full time pipe makers probably have only been around about five years. Chinese pipe making is still in it’s infancy, as a result it will be making mistakes, taking roundabout paths, and it will still be ‘full of youthful spirit’. But I’m excited to see it rise. At this point, Chinese pipe makers have already arrived at a basic skill level, and we’re moving from copying to innovation, we need time, please be gracious with us."

I’ve been smoking pipes with different people around China for a long time, but I didn’t realize just how much Li had distilled the current culture and situation regarding pipes in China until my time at pipe mecca. He’s right, Chinese pipe making is in its infancy, and some of the things we’re seeing right now are part of those growing pains. What gives me hope is pipe smokers are the kind of people who are going to pursue art and perfection in pipe building to bring the culture to the next stage. I also have hope that the increase in brick and mortar shops will be havens for fostering the kind of culture we hope grows to further support the hobby we love in the world’s biggest market.

Li is doing what he can to educate himself and meet as many people in the industry as possible. He and a few others from China made the trip to the Chicagoland Pipe Show this year. I asked him how this went, "It’s difficult to express the experience. But I did a lot of homework to understand American pipe shows. The Chicago Pipe Show seemed to me like Chinese New Year, it’s a once a year opportunity for pipe makers and pipe smokers to be wild with joy. To have been selling pipes there was a secondary thing. The most important thing was seeing old friends, making new friends, and sharing delight with others and making progress in my trade. I really valued it." 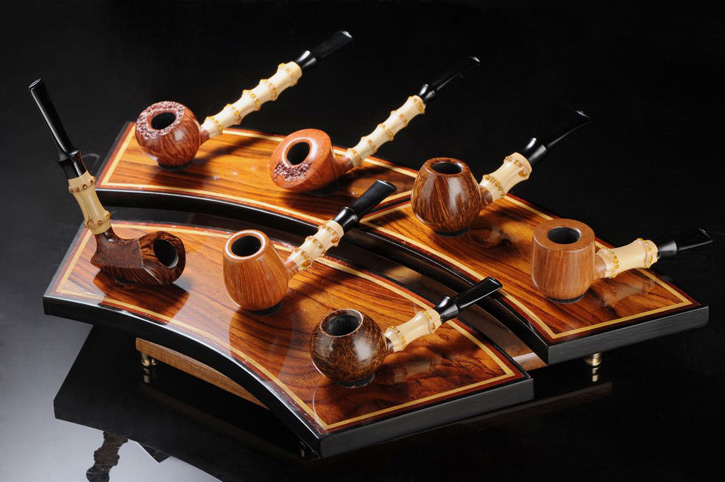 There are incredible resources available in America for both the pipe smoker and the pipe maker. There are companies which have made it their goal to further pipe culture, and this kind of movement is only just beginning in China.

I’m excited to have the opportunity to witness this process up close.

If you’re interested in a pipe from Li Zhesong they are for sale under his name on http://qualitybriar.com and http://scandpipes.com