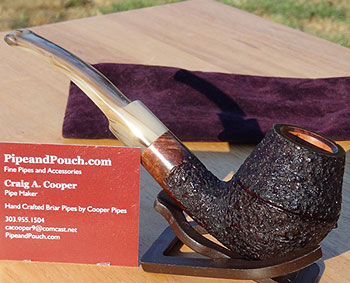 Doing a review on a new pipe may well seem to be the simplest thing that any pipe enthusiast might do. Looks cool, feels good, stem fits, finish is shiny, A-OK, let’s fire it up! But truth be known, it is rather a daunting task, and I do not take it lightly.

First impressions tend to stick with people. When dealing with pipes and the people who craft them, this natural reaction is no different. My first introduction to Mr. Cooper of Pipes and Pouch came from Kevin Godbee ofPipesMagazine.com. Mr. Craig Cooper is a pipecrafter who for over 30 years has been making his home and his pipes in Colorado. He has an unquestioned reputation as being a premier domestic manufacturer of some of the finest handcrafted pipes available. We exchanged email pleasantries and he agreed to send a pipe for review. 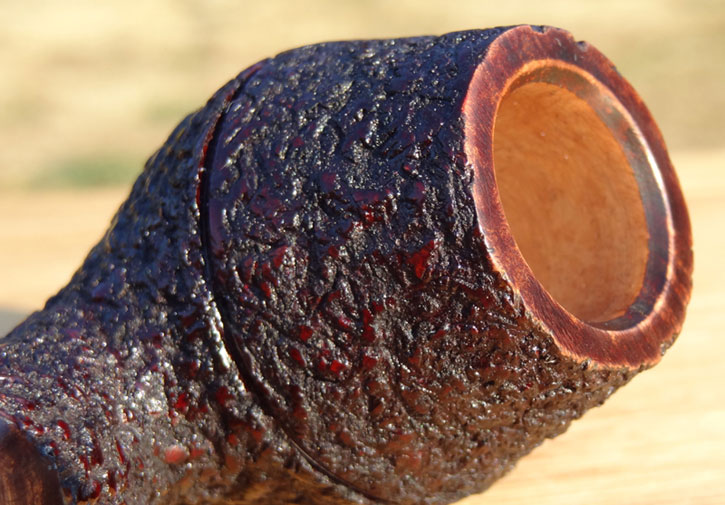 Few things (perhaps sadly for me…) are as exciting as getting a new pipe. I have had this particular sample for about two months now, and yet every time I remove it from its deep purple velvet draw-string sock, I am still as excited as I was the day the box arrived in the post.

My pleasures in pipes are simple, not extravagant. But the finer things of ‘simple’ are what impress me. This particular example supplied by Mr. Cooper has filled every point of my pleasures in a pipe with simplicity and attention to detail alike. Suffice it to say, I found it very pleasant to the eye, a pleasure to hold, and a quality example of pipecrafting.

My initial visual response was one of excitement. Immediately I like the overall shape and color of the pipe. It is flat-out visually striking. The color combinations while narrow and subtle in their variations were nonetheless stunning. Medium to dark brown hues on the briar give way to a deep honest and hearty shade of red reminiscent of a warm brick hearth when exposed to bright light. The stain work over the rustication has varying opacity levels, and provides a perfect accent to the natural shade and grains on the Algerian briar. 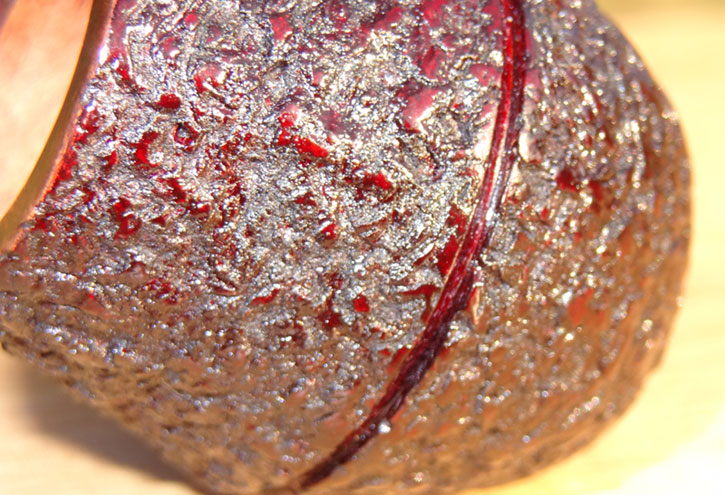 Immediately identifiable as acrylic, the stem on this pipe is marbled and layered in colors from cream and light tan, to dark brown that blends into nearly black. The contrasts are immediately apparent, not only between the colors within the stem itself, but between the stem and the briar. While centering on a burnt-umber like palette, these perfectly matching shades blend a handful of earthy tones with amazing perfection. 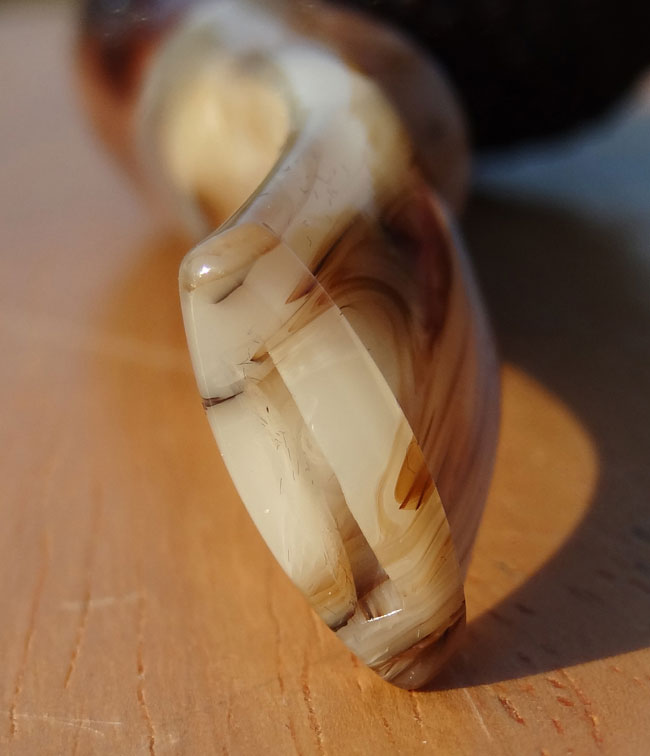 Opinionated as any review might be, the stem on this pipe is just fantastic. It is artistic and adds flare, but yet holds eye-catching and cuttingly traditional lines. It says, "Hey, I’m the new guy in town – look at me". I do not hold a preference in a favorite type of stem material, but I’m of the opinion that little or nothing would look better fitted to this pipe than what Mr. Cooper has chosen. If a fine German ebonite is a ‘tuxedo’ to a pipe, this acrylic stem is a finely tailored suit, but worn with the tie pulled low and the top two buttons of the white shirt opened. In other words, this pipe would fit in just as well in a formal setting alongside the most respected pipe designs out there, as it would in a humble cabin setting gently rocking in the hands of grandpa in front of the fire. 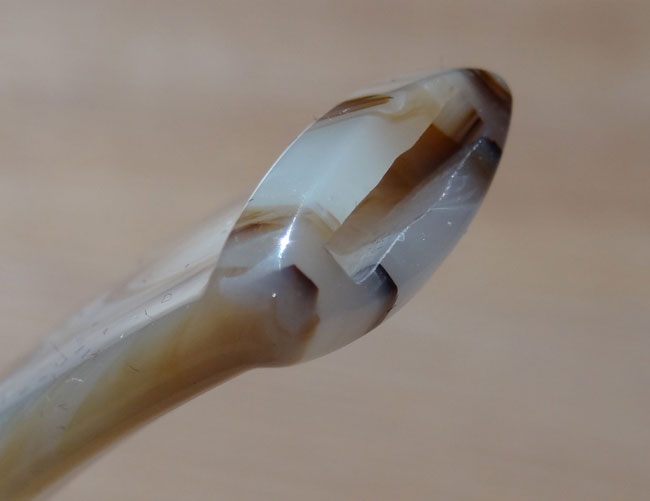 The overall shape of the pipe is that of a bent Rhodesian. The bowl being of medium height and not too stout, has what seems to be a perfectly symmetrical shape both horizontally and vertically (discounting the hand rustication of course). After speaking to Mr. Cooper and knowing that this bowl is primarily handcrafted, the results show a machine-like level of expertise in production. 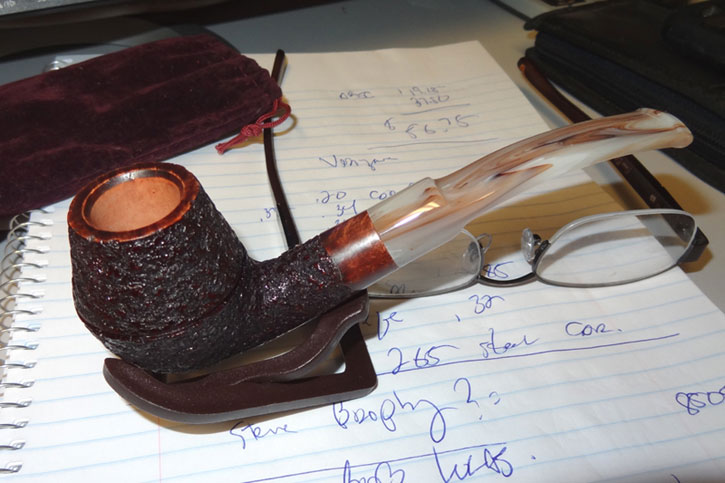 A slight grooved ring wraps the bowl just above the apex of its girth and adds a sharp, smooth and dimensional line that absolutely attracts the eye, but does not detract from the over-all appeal of the pipe, or in any way seem out of place on this Rhodesian.

In addition to the aesthetic value of the recessed ring and the distinction it adds to the body of the pipe like that of a fine hand painted pin-stripe job on a classic car, I found it to have a very practical purpose as well. That groove gives me a point of referenced on the bowl. It allows the handler to sense that unique position on the pipe to add a feel of muscle memory while holding it. That groove places a feel across the palm, and fingers that tells you without looking exactly where the pipe is in your hands. This comes in handy in the dark fall and winter evenings when you might be out on the back porch for a late night smoke. 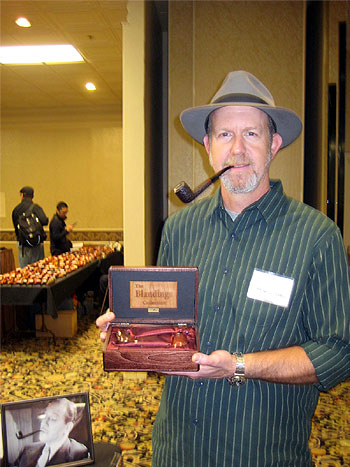 I mentioned early on about the character of Mr. Cooper. Here is a man whose livelihood is derived from crafting pipes, quite honestly, high quality pipes. These pipes, each a work of art in and of itself, are imbedded with the blood, sweat and tears, scraped knuckles and cut fingers of Craig Cooper. And yet, when asked about how he produced this unique style of rustication, he not only revealed how he accomplished the feat, but agreed to send me images of his tooling that I could use in this review.

Perhaps you have been a long time pipe enthusiast and have not had the pleasure to meet many of the pipe crafters themselves. If you had, you would quickly realize that this is not always the norm. Pipe crafters hold things like staining and polishing styles, blasting and rustication techniques pretty close to the vest, and rightfully so. These are the features that tend to make pipes unique and identifiable to their maker or brand. For many, these techniques are easily noticeable and become the ‘calling card’ if you will of that crafter. Sharing ‘WHAT’ you do with the public is why you are in the business. You want to share your love of pipes and briar and your artistic styling expressed in the finished product. Sharing ‘HOW’ you do what you do, is rare. A willingness to share personal styling secrets not only speaks volumes for Mr. Cooper’s character, but shows a man putting the love of his craft and the betterment of the industry above personal gain or ego. Mr. Cooper’s detailed description of the methods of rustication on this pipe defines a man confident in what he is doing, and yet at the same time, genteel enough to put the advancement of the industry and the education of the consumer ahead of anything that might get in the way.

All the rustication is done by hand on this pipe. No machines, no hammer devices. It is just simply old-fashioned hand technique that allows Mr. Cooper to get the look exactly the way he wants it to. Not too much, not too little. Not to heavy, not too light. Using a tool he made himself using tools he already had lying around the shop. In his own words, Mr. Cooper describes his rustication tool as "nothing more than HSS drill bits, the chuck end ground to a point, then epoxied into the end of a file handle". Using it is explained with equal simplicity, "Just twist and gouge the surface of the pipe until you’re satisfied with the results. Pretty basic." Humble remarks that when applied through his skilled hands produce the likes of what you see in this Rhodesian. Speaking specifically about this example, he states, "(I) …developed my own style of ‘gouging’ the briar. I sand the rough spots, stain, and then hand brush a thin coat of shellac to produce a shiny finish. Shellac is alcohol based, so it dries with no odor. It also doesn’t seal the wood, so the briar can still breathe." 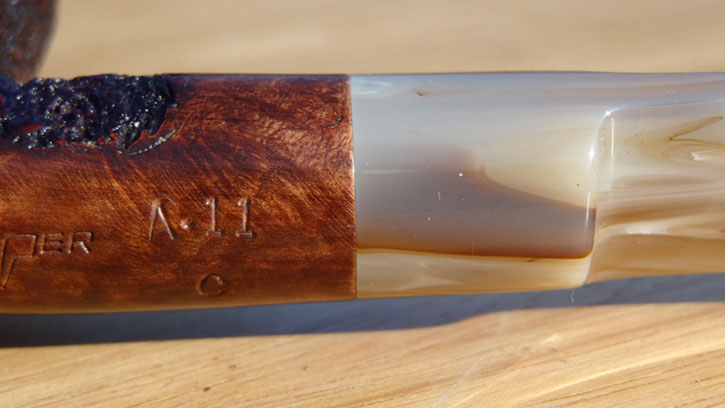 The pipe is a joy to hold and smoke. The draw is as smooth as any pipe I have ever smoked, and cool even with some dryer aromatics that I like to keep on hand. Presenting smoke softly to the tongue, and being light in the hand this bent Rhodesian felt like a hug from an old friend. There is not a rough edge to be found on this pipe. The tenon/mortise fit on this pipe tight, but no to the point where the acrylic stem makes any noise at all when inserted in the mortise. The acrylic is nearly perfectly formed, and the bit slips into your mouth as smoothly as anything. Not too heavy to hold in the mouth when necessary (weighs just over 50 grams), comfortable and inviting – I really like this pipe.

As with any new pipe you have to understand that there will be a break in process, but I noticed almost immediately that quality of the tobacco coming through with more intensity than it does in some of my seasoned pipes. Is this a product of the smoothness of the bowl and the quality of the airway and all its fittings? I cannot say for sure, but this Rhodesian is in danger of causing me to set aside a Hilson ¼ bent Canadian that has been a favorite of mine for some time. I enjoyed a bowl of The Tinder Box’s Norse Gold for what was easily 20 minutes, but feel like I may have to relegate this to a Columbian Mocha blend that seems like was meant for this Cooper piece.

Learning styles, techniques and the mechanics from men like Mr. Paul Perri of So-Cal, and the well known Tim West, Mr. Cooper says he has no real "secrets" to his craft. Confident that his style has evolved over the years, he now characterizes it by what he modestly calls ‘artistry’. 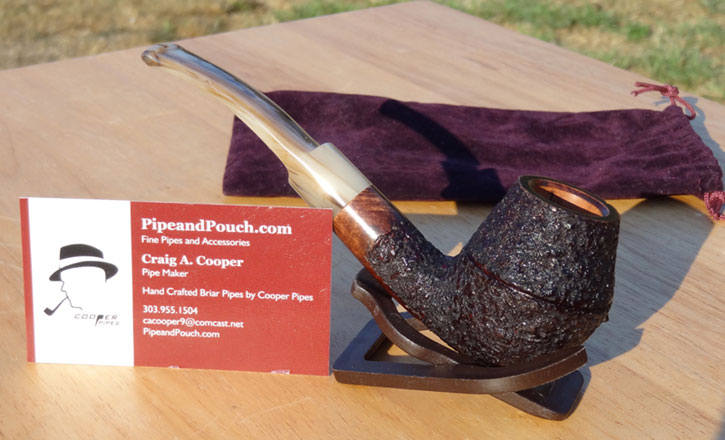