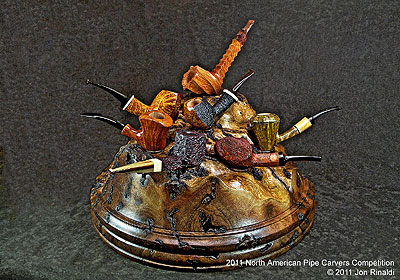 Most pipe shows have raffles for 7-day pipe sets, but the Kansa City club wanted to do something a little different. For years, many of us in the pipe community have heard so many people rave about the unique, stylish, creative, high-quality pipes being made by the Danish artists. However, several collectors feel that the same type of quality and unique styles are also available from North American makers. Hence, the North American Pipe Carvers Competition.

This was the second year for the contest. A specific shape is chosen and the pipe makers are free to provide their own interpretations as long as they fulfill the basic requirements. This year’s shape was a panel pipe, defined as any pipe with two or more panels that could be convex, concave, flat, or fluted. It is defined in this manner to allow as much creativity as possible to the pipe makers. 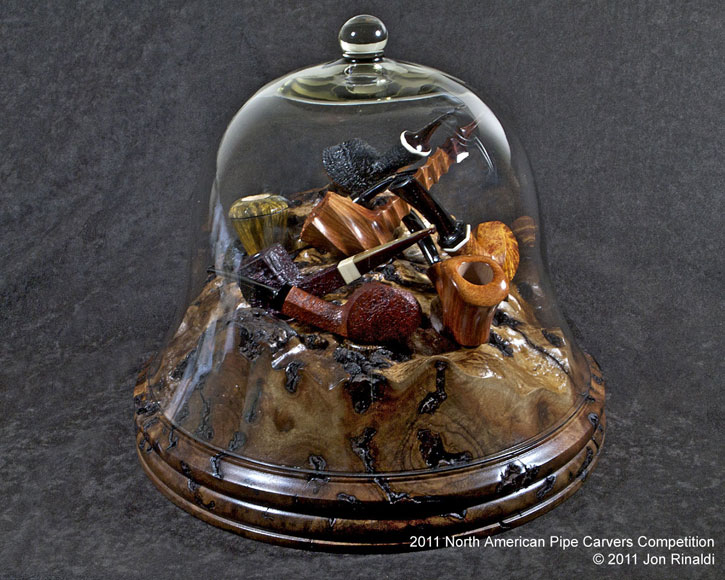 Forty-two pipes were entered and then the judges chose the seven best pipes to be auctioned off. Pipe maker and wood craftsman, Anthony Harris of Acme Woodturning designed the extremely creative and attractive display case shown above. Pipe maker Jon Rinaldi painstakingly photographed all 42 pipes, which you can see below.

Tickets were sold at $25 each with the proceeds going to the pipe makers that were included in the set. The Pipe Carvers in the seven day set were: Quinton Wells, Adam Davidson, Rad Davis, Jack Howell, Michael Parks, Joe Skoda, and Lee Von Erck. The winner of the 7-day set was Bobby Owens from Georgia.

Here are all 42 pipes in alphabetical order by maker. (Click on the pipes for a larger view.)

Here is our full coverage of the 2011 Greater Kansas City Pipe & Tobacco Show.