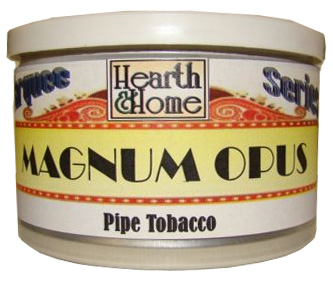 Pipe smokers have more choices in high quality tobaccos than they’ve ever had at any point in history, and the Hearth & Home brand is making sure of that. It seems that tobacco blender Russ Ouellette never rests and always has some unique new tobaccos in the works. Two of the new Hearth & Home blends just released were previewed at the West Coast Pipe Show in November 2010 to rave reviews … but they have not been available until now. Also debuting with the new tobaccos are new tin-art designs. The impetus for the new tin-art is that this also introduces a new series in the Hearth & Home line called the "Marquee Series". The first two entrants in the Marquee Series are Magnum Opus and Sweet & Savory. There are two more new Hearth & Home tobaccos named; Lakeland Brickle and Steamroller.

Magnum Opus– The Latin term Magnum Opus loosely translates to "masterpiece". This tobacco is a blend of Cyprian Latakia, yellow Virginias from the U.S. and Bulgaria, and the Oriental tobaccos; Izmir, Basma and Yenidje. In addition, a small amount of Perique is added for depth and smoothness. According to well-known pipe and tobacco collector Fred Goldring, "I immediately searched my mind to recall what vintage tobacco this sample best represented. Every time I put a name to it the blend again changed and the taste shifted to another and yet another blend from the past, all of which I stock in my cellar and all of which I enjoy very much. I decided to smoke the last half of the bowl that I started the evening before. Believe it or not the second half was more magical than the first. I walked in and out of my smoking room a number of times this evening and each time the exquisite aroma of this blend became more apparent. If you make a ton I will purchase half. This, my friend is a world class tobacco born out of the magic of Russ O." 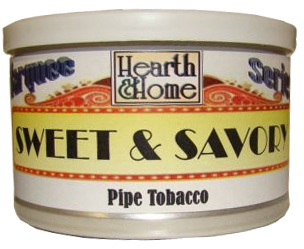 Sweet & Savory– This new blend is named for the way it tastes –  "Sweet & Savory". It contains a variety of yellow and red Virginias for sweetness, along with Yenidje and Basma for a naturally floral note, and Perique for its "plum and pepper" character. In addition, there is smoky, spicy dark fired Kentucky for complexity and "kick". This is a blend with a "whole mouth feel", meaning that all of your taste buds are involved while smoking this unique combination. According to Russ Ouellette; "What we found most surprising is the cross-section of pipe smokers who enjoyed this tobacco. People who prefer straight Virginias, Virginia/Perique, Burley and even Latakia and aromatic smokers said they enjoyed it." Whether you’re looking for a flavorful treat to add to your rotation, or an all-day, everyday type of blend, see what Hearth & Home Marquee Series Sweet & Savory has to offer.

Lakeland Brickle is quite a unique tobacco as it comes in a form like no other. It’s a cake, but it has it’s own exclusive shape. Rather than the brownie-size and shape you might be used to with most cakes, Lakeland Brickle is a 7"x7" thin square of just 1/4" thickness. 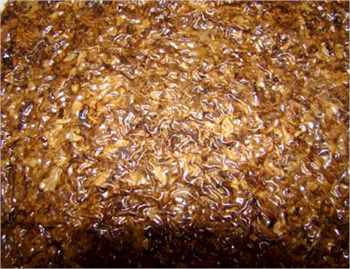 Russ tells PipesMagazine.com; "Our customers have become frustrated with the scarcity of some of the Lakeland-style blends that have become quite popular, and asked us if we could make a good one that is readily available, so we did. What differentiates these blends from everything else are their strength and the old-fashioned "scents" they use. They also make quite a few of their tobaccos in the form of flakes, cakes and ropes … when you can get them."

Lakeland Brickle is a combination of Virginias (mostly red), along with dark, tangy Burleys (which add depth, spice and strength) and infused with traditional Lakeland-style flavors such as rose and a tonquin-type (among others), but with a light hand to avoid the “soapiness” that some people dislike.

It is then heat-treated and put it under pressure to further develop the flavor and body, and finished by vacuum-sealing in 8 oz. bags. No humectants are used in the making of the blend, so the tobacco should be transferred to an airtight resealable container (ziplock, mason jar, etc.) upon opening the vacuum bag.

When you remove it from the bag, it will be in the form of a thin, square-ish crumble cake which can easily be cut into strips with a scissor, or cubes for easy packing. The mildly sweet but robust flavor is intriguing, and seems to get better with each successive bowl.

Steamroller is a new pipe tobacco that lives up to its name. You better be sitting down when you smoke this one. Russ says; "This is the strongest pipe blend we have ever made. Rich and toasty red Virginia is married with two different types of darker Burleys, some unflavored black Cavendish to take the edge off, and a bit of Latakia and Perique for depth of flavor and zest. For those of you who enjoyed Five Brothers and the unscented Lakeland blends for their power and richness, Steamroller will be right up your alley." 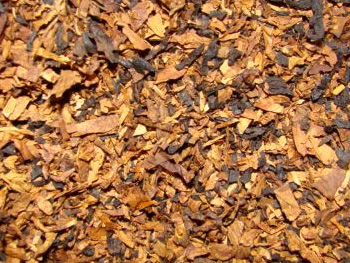