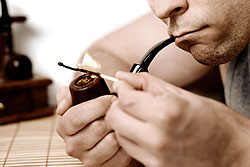 The International Premium Cigar and Pipe Retailers Association today urged Vermont egislators to use common sense when considering an extreme tightening of the state’s current smoking ban which has been in place since 1987. The proposal now before the legislature includes the banning of smoking in tobacco shops and other such adult oriented locations.

Montpelier, VT – The International Premium Cigar and Pipe Retailers Association today urged Vermont legislators to use common sense when considering an extreme tightening of the state’s current smoking ban, which has been in place since 1987.

The proposal, now before the legislature, includes the banning of smoking in tobacco shops and other such adult oriented locations.

"No one goes into a tobacco store without expecting to encounter secondhand smoke," said Chris McCalla, legislative director of IPCPR. "These are adults-only workplaces whose air quality falls within the safe levels of air quality established by OSHA – the Occupational Health and Safety Administration."

McCalla urged Vermont legislators to be reasonable in their deliberations of the issue.

"We believe no smoking ban should be legislated and that it should be left up to business owners to determine whether or not smoking would be permitted in their establishments. However, the Vermont smoking ban – which has served the state and its citizens for nearly a quarter-century – is strong enough to satisfy the demands of any reasonable employee who desires a smoke free workplace while respecting the rights of others," McCalla said.

McCalla pointed out that most tobacco shops are mom-and-pop operations, small businesses that employ neighborhood workers and generate sales and income taxes for state coffers.

"If the right to smoke a cigar, pipe or other tobacco product in the controlled environment of a cigar store is legislated away, then these same lawmakers will be voting to eliminate these businesses and the jobs and taxes that go with them," McCalla added.

"Premium hand-made cigars are celebratory and special. Pipes are calming and reflective. Both are more like hobbies than habits and use of neither is aimed at children. We are a unique industry enjoying the sale and use of legal products. As long as we respect the rights of others as they should respect ours, we should be allowed to stay in business instead of being deprived of our livelihood through unreasonable legislation," he said.