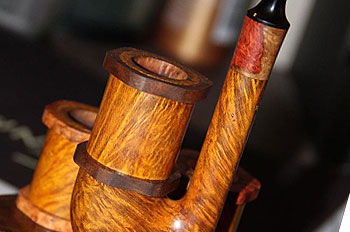 Whizzing down I-70 at 75 mph, wind blowing through my hair, the open road ahead of me; it all sounds so glamorous. That is until I try to hold a pipe in my right hand and pack the bowl with my left hand, while an open can of tobacco is precariously balanced on one knee.
This of course requires me to steer with my other knee as I deftly maneuver that final tamp and my charring light. Any pipe smoker who enjoys a quiet puff in their car has faced this time-tested and quite frustrating dilemma since 1896 when Henry Ford sold his first “Quadricycle”. 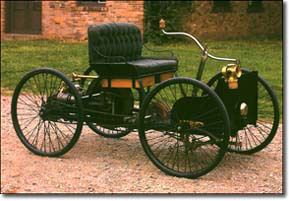 While I have no facts to back it up, I’m sure there were a few good men in the early 1900’s that uttered the statement “Dash it all, I’ve burned another hole in my trousers whilst driving” or “Confound it, I’ve lit the car’s seat ablaze again”. Lighting a pipe in a moving vehicle can be tricky, nay; pipe smoking can be downright suicidal.
With a career as a traveling salesman and having a passion for pipes, I realized two things early on in my career: 1) the time with my family is precious and sacred; therefore, 2) I had better smoke while I am on the road. Window time (or in laymen’s terms, driving time) is both a blessing and a curse in my profession. I use this time to read audio books, listen to music, and ponder life’s little conundrums. All three of those activities are perfectly suited to a sweet puff of aged Boston 1776 Virginia or a creamy bowl of Syrian Star.
So it was about three weeks into my foray as a traveling salesman that I began bringing my pipe bag on the road. That same week I began to learn of all of the perils and dangers of smoking in the car. For example, the panic that occurs when hearing the grind of the rumble strips, dropping a pipe out of the window while trying to remove the dottle, feeling the hot ash on my leg as I accidentally cast off embers while singing along to my favorite songs… I’ve done it all. I knew there had to be a better way.

My adventures into pipe making with Ken Davis have taught me a few things. Primarily, have a goal and a plan. I knew I wanted to design a pipe that would travel well, would be comfortable to clench, wouldn’t smoke too hot with the wind from the open window hitting the bowl, would be easy to set down if needed, would be light-weight, and would be simple to pack. I went through all of the pipes in my collection, and not one of those met every requirement. I scoured the web for ideas, again falling short. So I dusted off my old drawing pad and set to work on a new design of something that would be effective.
I wrote to a dear friend of mind, a pipemaker by the name of Maigurs Knets, hoping for some guidance and inspiration. He and I have collaborated several times before on some custom pipes, and he was excited to begin another project for me. He has done several beautiful calabash style pipes with cooling chambers similar in concept but unique in style to what Tom Eltang, Misha Reviagin, and our own Anthony Harris have been making recently. Maigurs suggested that a calabash would be perfect, as the hot smoke would have time to cool before arriving at the stem.

And so the brainstorming began. I started with the idea of an Oom Paul or raindrop shape since I knew I wanted the pipe to hang from my mouth using my chin as an added support in case I needed to free my hands. It was suggested we add a taller bowl so that a variety of tobaccos could be burned fairly easily. I have three main tobaccos that I smoke about 90% of the time; McCranies Red Ribbon, McClelland’s Christmas Cheer, and our own club blend, Syrian Star, mixed with some of McClelland’s fine Blue Mountain leaf. Now I had a dilemma. Which one of these tobaccos would I dedicate for my new car pipe? I couldn’t pick one. As any good pipe smoker knows, we maintain a few different blends in our repertoire to suit the given mood. If I’m happy and relaxed, I want the sweetness of Christmas Cheer. If I’m falling asleep, I need the kick from my Latakia blends. What to choose? I need three pipes to make this work. And that’s when it hit me. I didn’t need three pipes. I needed three bowls. In the words of Mr. Sherlock Holmes, this was, indeed, “quite a three-pipe problem.”
I began ruthlessly drawing and erasing, drawing again, until my fingers were sore and my mind was exhausted. But there, in front of me, was the pipe. Maigurs will laugh when he reads this, as my drawing skills rival that of a three year old. Fortunately, we have developed a rapport over the years that allows him to ead me like a book. He knew exactly what I wanted, and began to translate it into briar. An Oom Paul calabash with three interchangeable bowls began to form in his workshop. Soon we hit our first snag. Maigurs asked how we should attach the bowls to the pipe. Most calabash pipes are fitted with an o-ring to hold the bowl in place, but our design relied on keeping the weight down while still creating a tight seal on the pipe. He suggested threading the bowls, which would keep them from accidentally slipping when dumping the ash out of the pipe. Having had experience with one of Anthony Harris’ pipes, I knew threading was an excellent choice.

The second problem arose when we decided how we would make the bowls distinguishable from one another so that I could remember which tobacco goes in what bowl. I entertained an idea of creating a smooth bowl, a blasted bowl, and a rusticated bowl, but, Maigurs, in his infinite wisdom, realized that the non-smooth bowls would look truly foolish on a smooth pipe. All three would have to match the finish of the pipe. Maigurs had made a pipe earlier this year that reminded me of a U-joint that plumbers use. He also made a fun little pipe called “Joe the Plumber” that had a small bolt-shaped adornment made of an exotic wood. I fell in love with both of these designs, so I began sketching the idea of making a pipe where the bowls looked like a bolt fitted onto the end of a u-joint. I sent the sketch to Maigurs, and he ran with the idea. He turned three different bowls, and then used exotic woods to make Hexagonal bolts around the edges of the bowls. He used Amboyna, Walnut, and Afzelia Burl. Each bowl now had a distinct look while all matching the base pipe.
The third and final problem was how to make the pipe and bowls readily accessible and usable on a long road trip. This is where Maigurs took on full creative control, and designed a most amazing invention. He went through two main prototypes. His first prototype sank the pipe into a walnut base that would fit into the car’s cup holder. The pipe was inserted into a hollow in the base that would hold the pipe securely. In experimenting with the prototype, Maigurs realized the pipe wobbled too much in this base design, which made screwing the bowls in trickier. He wanted me to be able to change bowls quickly, easily, and with one hand to make driving safer.

He returned to the drawing board, and developed his second prototype. Each bowl was already threaded to match the pipe. Therefore, he modified the base, to include a threaded hollow in which each bowl could be screwed. This design allows me to pack each bowl before I leave for my travels, and then simply unscrew and attach the bowl I want to the pipe. To resolve the wobbly pipe problem, Miagurs referenced the earlier idea of the bolt shape. He cut a small hexagonal indentation into the walnut base. Then he adhered a powerful rare-earth magnet to the underside of the base. He cut a completely new pipe base using the original shape but adding a small hexagonal nut to the bottom of the pipe. He hollowed out this small nut, inserted a rare-earth magnet into the hole, and covered the magnet with a thin piece of briar. The magnets attract each other, and lock the pipe base into the hole. With the pipe base securely in place, I simply screw in the bowl of my choice. There is no pipe wobble and no awkward fumbling. He presented the finished pipe to me shortly after my birthday along with all of our prototype pieces to keep as a memory of this amazing experiment. I have lovingly dubbed the pipe “The Three Pipe Problem” after the famous Holmes quote, and the trifecta of brilliant bowls of Maigurs’ creation.
(This article originally appeared in The Greater Kansas City Pipe Club Newsletter in November 2011.)
Dustin Babitzke is a member of The Greater Kansas City Pipe Club 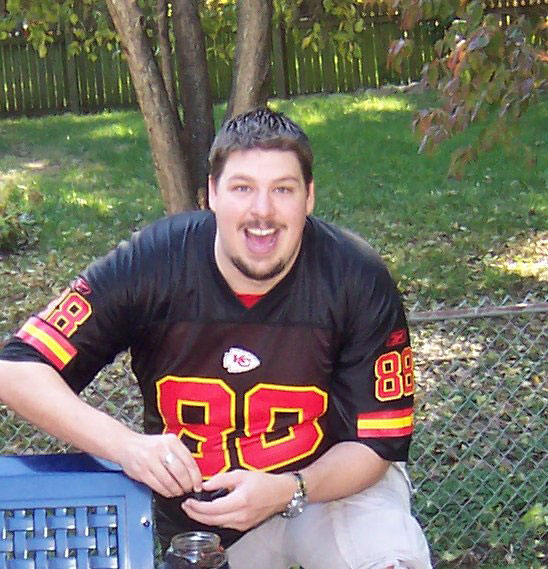