The sun is shining, the temperature is 10° F/-13° C, the roads are covered with snow and the lakes are frozen over. It’s winter in Minnesota and I am headed to St. Paul for the Great Northern Pipe Club’s monthly meeting. (I like the name. It reminds me of the "Great Northern Railroad" which was started by James J. Hill who lived in St Paul. You can tour his mansion here.) I’ve been thinking about going for quite a while now but St. Paul is over 50 miles from where I live so I haven’t done it yet. Well, it’s finally time. My friend Ted, of "Vig Guitars," also in St. Paul, invited me up, so here I go. The Great Northern Pipe Club meets on the third Sunday of the month at the Golden Leaf Tobacco shop on West 7th street near downtown St. Paul, and the meetings are open to everyone. It took about 50 minutes to get there and another ten to find a place to park that I didn’t have to pay for. The Minnesota Wild hockey team are playing at home today so the streets are filled. The wind is up and it’s cold out here.

The Golden Leaf Tobacco shop is a great old place. Hardwood floors and high ceilings. There is a nice long counter with lots of tobacco in jars at one end and a large table at the other. They offer all the tobacco blends of their Minneapolis store plus 15 blends exclusive to the St. Paul shop. Across from the bar are tall, glass front cabinets full of estate pipes with decent prices. They also sell new pipes and smoking accessories and they have a walk in humidor full of great cigars. I wonder if they’d rent me a room? 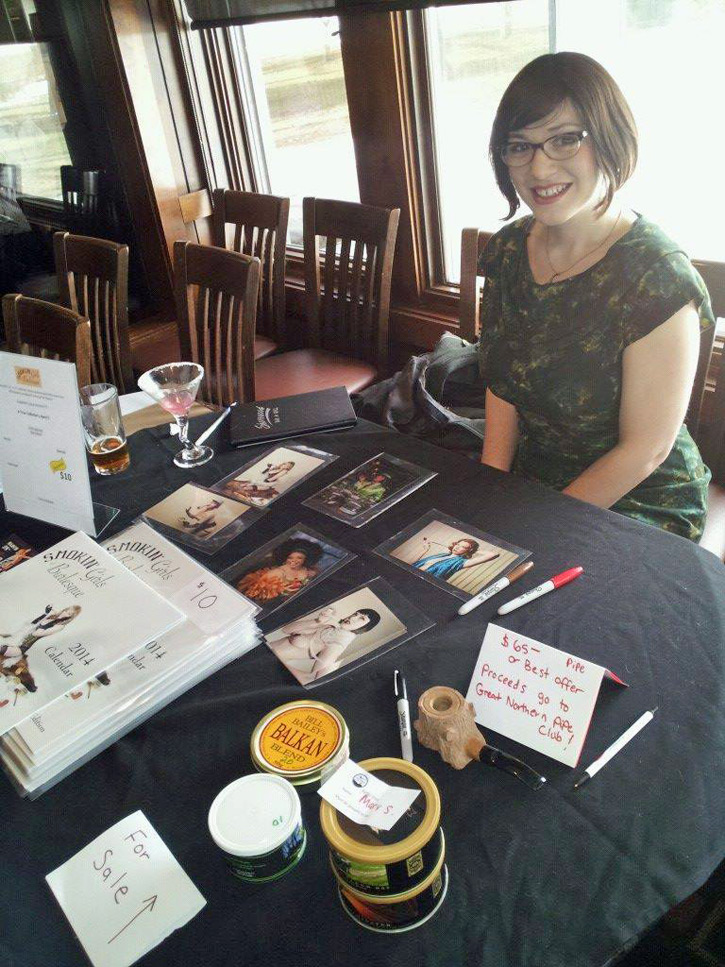 I have been to both shops a number of times. but the St. Paul store has more character. (No offense, Minneapolis.) Tim Harlan, the manager, welcomes me as I come in and Ted is at the table at the far end so I walk down and grab a chair. I brought some Balkan Supreme and I fill my Kaywoodie Mandarin and check out the table full of pipes some of the guys have brought. The talk is all about pipes and tobacco, just as it should be. Soon we move to the lounge on the other side of the store where there are a few meeting rooms. There are ten to fifteen guys here. The big screen TV is on and the Vikings are losing. I wont say any more about that. The game is over, the TV goes off and Tony Soderman, the club president starts talking club stuff. 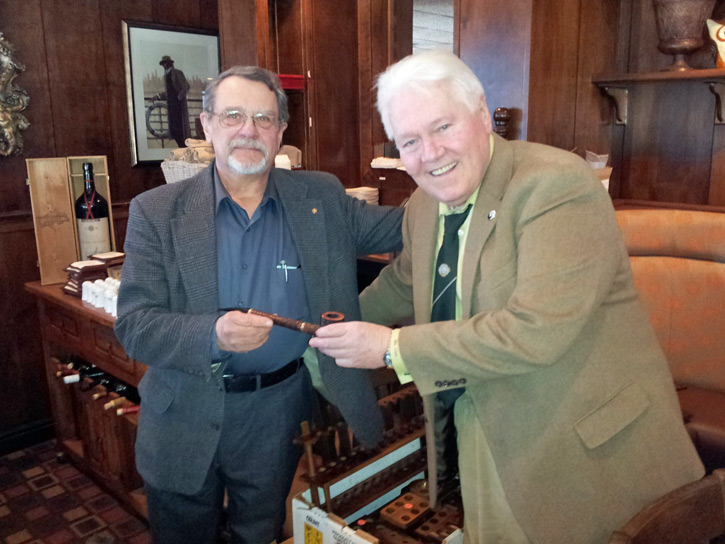 I checked out the club’s website before coming, to try and get a feel for the group. They have a nice site with information and a photo gallery. They have officially been a club since 2002 but the making of it goes all the way back to the late sixties when the "Twin Cities" was a lively "hotbed" for pipe collecting. Pipe smoking and collecting declined in the ’70’s and only a few guys met occasionally at J. R. Fielding’s in Minneapolis. "A pipe club eventually achieved recognized status as an official organization at the University of Minnesota". With a "roster of only 16 names, it’s future was uncertain". "As the University Pipe Club declined in 1998 and 1999, a new spark was ignited. A couple of instigators got together and forged ahead with an organization that would eventually become the Great Northern Pipe Club. With the help of several local pipe shops and tobacconists, the time seemed right for the existence of a new pipe club". It seems the Twin Cities has a rich culture of pipe smoking, making and collecting. You can read more about it on their website here: http://greatnorthernpipeclub.org/

As the meeting comes to order, Tony takes the floor. One of the things Tony discusses is the pipe of the year. Each year the club selects a "pipe of the year," and a pipe maker from Minnesota or with connections to the state gets selected to make it for them. This year it will be a rusticated Volcano made by George Lewis of Lewis Pipes in Minneapolis. George and his father Rich Lewis are great pipe makers and you can check out the website here: http://www.lewispipe.com/.  Rich studied with top pipe makers in England and Italy before coming home and working for his father in the shop in 1972. They are located in the Rand Tower in downtown Minneapolis which is a beautiful example of the Art Deco style. Art Deco is a visual arts design style popular in the ’20’s, ’30’s and ’40’s.

Tony tells the group about a pipe club in Wisconsin that lost the support of it’s pipe shop, and without a place to meet they have fallen apart. He stresses the need to support local pipe shops with our business rather than buying everything online. Sound advice if you ask me. Our brick and mortar shops will be gone if we don’t support them and an important era in American history along with them. A couple things are voted on and everything is documented accordingly. Several members brought pipes to sell or trade and have them displayed on a table in the room. This is one reason for stressing the need to support the B&M stores. A lot of trading and selling is done at all pipe clubs and it’s great but we still need to spend money at the shops. After a while Tony introduced me to the group and I was warmly welcomed by all. 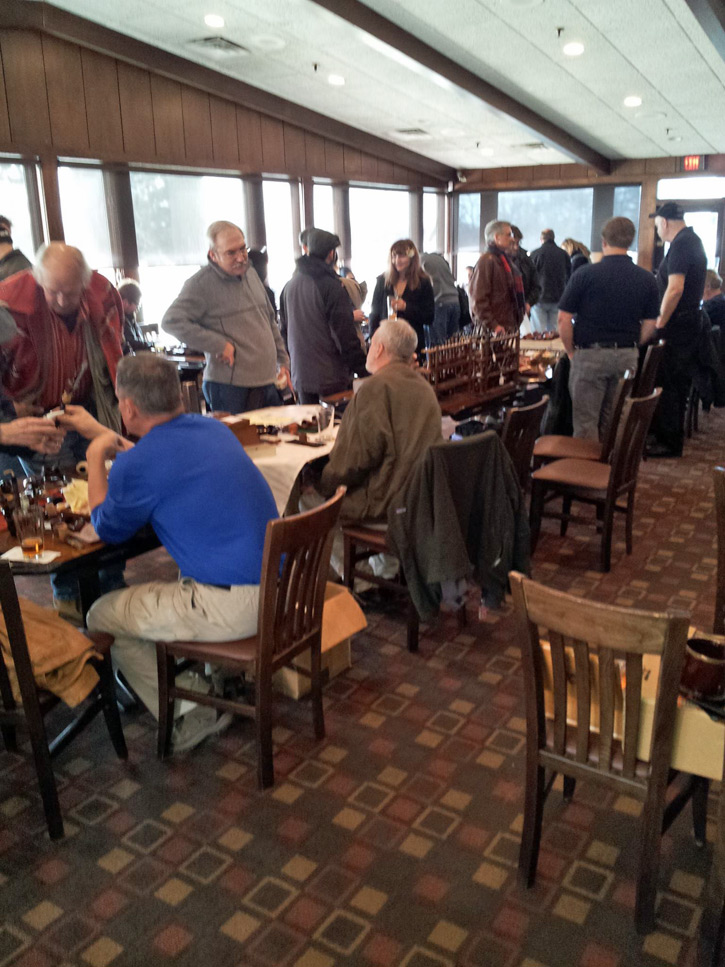 While I was there I meet Kris Edwin Barber, maker of Edwin Pipes. He brought along some gorgeous freehand style pipes he made. They have beautiful grain and styling. Kris was selected as last year’s "pipe of the year" maker for the club. We talked for a while and I found out he has done an episode of The Pipes Magazine Radio Show. Kris is a great guy, very friendly, as was everyone I met. One thing I noticed about the group is that almost everyone appeared to be in their 40’s or older. I’m wondering what that says about the future of pipe smoking/making. I know there are quite a few younger guys and gals on the Facebook pipe groups so it seems that the tradition is continuing and maybe there are younger members in the Great Northern pipe club who just didn’t make it to the meeting. I hope so. There are 56 pipe clubs listed as members on the United Pipe Clubs Of America website, and 22 on the International Association of Pipe Smokers Clubs site. I also located a bunch more in other countries. So it’s good that there are a lot of pipe clubs out there but I wonder what we can do to promote pipe smoking and collecting and keep the tradition alive? I guess that’s something to work on.

I had a good time at the meeting. Everyone was friendly and informative, answering any questions I had. They were all very willing to talk about their pipes and tobacco and I felt right at home. Next time I’ll be bringing my membership fee and joining the group. We all sat around and talked for a while and then reluctantly, I had to leave. In the other room, Tim was behind the counter and I made a stop in the walk in humidor to grab a cigar for the trip home.

All around the area near the Xcel Energy Center, where the Wild play, there are signs that say, "No event parking. Violators will be ticketed and towed." So I was sending silent messages to the parking gods and making them all kinds of promises if they protected my car from being towed. I must have found favor with someone because my car was just where I had left it. As I drove out of downtown and entered the freeway I was really glad I had come. Even if the club meetings are almost an hour away it will be good to join this group. They were all very friendly and it was a fun afternoon. I know I’ll be back.

[Editor’s note: Photos taken during the author’s visit did not come out. Photos in the article are from the club’s Facebook page, and were taken at Shorewood Bar & Grill in Fridley, MN, which is no longer open for business.]