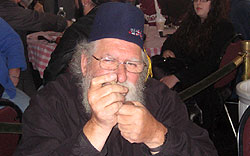 Every year, since 2003, the United Pipe Clubs of America (UPCA) hosts the annual U.S. National Slow Smoking Championships at the Chicago Pipe Show. This year it was held on Sunday May 15, 2011 which was the last day of the show. Slow smoking contests are where contenders get together and see who can smoke their pipe the longest with only one light, using two matches.
Once your pipe goes out, you are out of the contest. The last person smoking is the winner and declared the U.S. Champion. This year’s winner was Mike “Doc” Garr with a smoking time of 1-hour, 20-minutes and 22-seconds. Mike will be representing the U.S.A. at the World Cup competition which will be held in the Netherlands in October. (Mike is also the President of the Pocono Intermountain Pipe Enthusiasts (PIPE), and Vice President of the UPCA.)

Each year, the contestants are issued a new, unused competition pipe that is made to specific specifications for use in the contest. Each contestant is issued a pipe, 3 grams of tobacco, a tamper, two matches (one for the charring light and one for the true light), and a piece of paper. For the 2011 contest the pipe was a very nice Chacom billiard and the tobacco was Dunhill Early Morning Pipe. 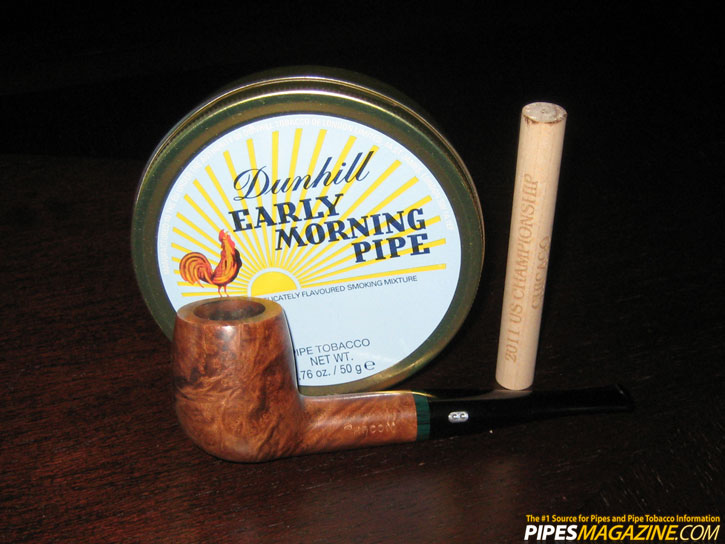 I, Kevin Godbee, the owner of PipesMagazine.com was the first out at a very low time of 9-minutes and 49-seconds. I packed the pipe poorly and sucked a piece of tobacco into the air hole, and at that point it was over. It is against the rules to blow through the pipe or to use a pipe cleaner. Someone commented to me “Wow, that kind of looks bad that the owner of PipesMagazine.com came in last!”
To which I responded; “Here’s the good thing about me going out first … It’s always been one of the most important parts of my mission with this site to grow the hobby. One of the things that negatively affects growth of the pipe hobby is when people are intimidated by it. They might be afraid that they are doing it wrong, or not smoking the right pipe or tobacco, or afraid of what others will think of them smoking a pipe. So when someone that might be perceived or expected to be some kind of expert, like the owner of PipesMagazine.com, goes out first, I hope it will encourage others to participate where they may have otherwise been afraid to.”
I didn’t do it on purpose though. Ironically, the day before, while watching the Balkan Sobrainie Throwdown I smoked my pipe for 45-minutes without a re-light.
Following along the same line of thinking, of encouraging people to participate, on the other end of the spectrum Jeremiah “Bubba” Drier finished in the top ten at 59-minutes and 54-seconds. This was his first competition. To do that well the first time is also encouraging to people that might be afraid to participate.
It should also be noted that Craig Cobine, the Show Director was forced to go out when he got a call on the radio that he was needed for some show business. Craig took one for the show team.


There were 50 contestants and here are the official results.
MORE READING  The Seattle Pipe Club
MORE READING  A Night with the Chongqing Pipe Club
Here are some more photos of the contest.

We wish Doc Garr much success when he competes in the International Championships in the Netherlands in October.