We are pleased to announce the winners of the February 2012 PipesMagazine.com Cartoon Caption Contest Sponsored by SmokingPipes.com.

We received 531 entries with the initial screenings narrowing the pool to 175. The secondary appraisals reduced the caption collection to 56. Finally, it was down to five, and then the three winners were chosen.

PipesMagazine.com has signed a contract with Jerry King for the production of four exclusive Pipe Cartoons each month, starting in February 2012. (Jerry has been drawing cartoons for Playboy Magazine for the past 17-years.) One of the four monthly cartoons will be published without a caption so contest entrants can submit their own entries.

SmokingPipes.com is the exclusive sponsor of the monthly contest. PipesMagazine.com Editorial Staff will judge the entries and SmokingPipes.com will award the prizes. The 1st, 2nd, and 3rd place winners will each receive a Sebastien Beo Pipe with a retail value of $85, $80, and $75, respectively. 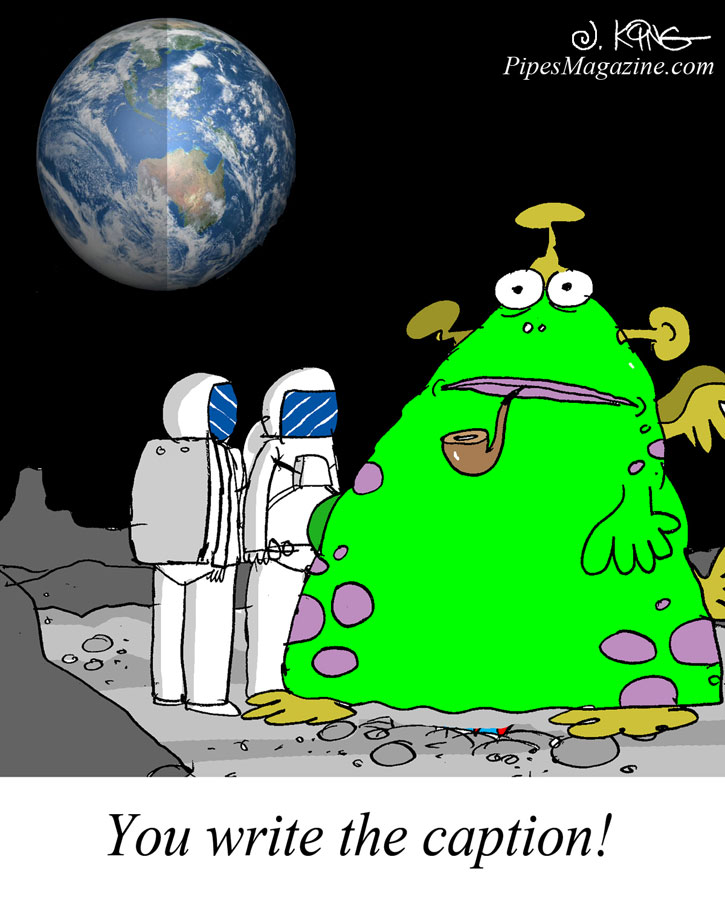 1st Place – He said his wife won’t allow him to smoke in their spaceship.
– Submitted by Michael Bolen, Park Forest, IL

2nd Place – Should we tell him if he added a lighter, tobacco tin, and some pipe cleaners shipping would have been free?
– Submitted by Tracy Johnston, Descanso, CA

3rd Place – If this is the Hugh Hefner of Mars, I’d hate to see Miss February.
– Submitted by Jeffrey Dau, Haledon, NJ

Congratulations to the winners!

The March contest will be posted in the next day or two.