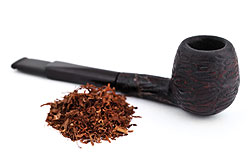 I love the first bowl in a new pipe. The courtship. The anticipation. The excitement. I fill the bowl carefully, taking time to appreciate the workmanship, the grain, the balance, the cut. I test the draw, then strike a match, and slowly tease its fire over the surface of the tobacco, drawing softly, inviting the flame to caress the leaf, bringing it to life in wisps of fragrant smoke. I savour the taste of those first puffs, of the wood as it warms and begins to meld with my chosen tobacco, and contemplate the gradual increase of richness and flavour that will come through the first dozen or so bowls, and even beyond. The ritual engages my senses and my memory in a similar way to that of a fine old wine as I swirl, sniff, and explore it as it develops in the glass.

The first bowl is a singular experience that can only happen once with each new pipe. It can be sometimes sweet, sometimes bitter, sometimes silky smooth, or other times a bit harsh, but in all cases, providing the pipe was well-crafted from good briar, that first smoke, properly approached, has always seemed special to me. I know I’m not the only one, that many others share my enthusiasm, if not my romanticism over the enticement of a new briar, but, there are others who approach the same experience with more dread than delight. In fact, it seems to me that more smokers pitch their tents in the latter camp than in the former, as though there’s a "conventional wisdom" at play, a socially constructed reality telling us that breaking-in is hard to do; not something to look forward to, but something to approach like weeding the garden or taking out the trash. We have to do it sometimes, even if we don’t really want to.

Where does this particular particle of belief come from? What is it about a new pipe that causes so many pipemen, veteran and tyro alike, to tremble before the task? There must be something behind such a widely held belief to give it at least some historical traction, if not currency. And, why do others amongst our numbers actually look forward to the process? Is it possible that today’s pipes are just better than the ones smoked by our grandfathers? And, if today’s pipes are better, more pleasant vessels on which to embark on those maiden voyages, why does the belief that pipes are painful to break-in persist so tenaciously?

To look for some clues, let’s turn our opera glasses back to a time in history when a high proportion of adult males were pipe smokers, and pipe factories produced millions of pipes every year, not the thousands or tens of thousands produced today. Since I’ve always maintained that the quality of the wood is the most important aspect of a great pipe, the briar seems an appropriate place on which to focus our lenses.

It’s commonly known that briar, in order to deliver the best smoking experience, must begin by being carefully processed by the cutters. Once the burls are harvested, they are cut into smaller blocks which are boiled in clean water for many hours, then slowly dried and made ready for the pipe maker. These blocks are then graded by quality, by size, by coverage and consistency of grain, and by location in the burl. (Interest in straightness of grain is relatively recent. During the early part of the 20th century, in pipe smoking’s glory days, straight-grained pipes happened as happy accidents more so than as planned events. If we examine hundreds of pipes from even the best of the pipe makers of the day, we’ll see a great many pipes of mixed grain, and a very few showing exceptional patterning. Those were usually selected for special grades sold at premium prices. Today, cutters and pipe makers often select their blocks specifically for grain.) 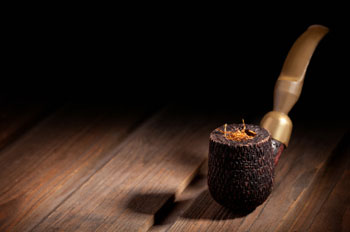 There has always been some disagreement about many things related to briar quality, amongst which are the geographical source of the burls, the age of the heath shrub (Erica arboria) from which the burls are harvested, and therefore the age and size of the burl itself, whether plateau (the outer blocks, with the rough outer surface of the burls intact) or the wood closer to the heart makes for better tasting pipes, how long the wood should be aged before it will make a good pipe, and so on. Indeed, a much more extensive study on this subject could be done, and a little time searching the web on these topics and reading the myriad opinions will reveal a lot of disparate views, but, whilst we’re pulling out our hair trying to make sense of it all, we can also pull out a couple of facts that may be germane.

First, old burls are bigger than young ones, and if your making millions of pipes, the economy of being able to get the highest yield for the heavy labour costs involved in harvesting those burls would have been an important factor. Though today, burls that are 20-40 years old are thought to be best for both their smoking characteristics and their beauty, the number of blocks these smaller burls provide is considerably fewer than what could be carved out from a much larger 100 year old one. Of course, clever marketing can romance a practicality into something else, and many factories in the twenties and thirties presented the use of this old wood as Good Thing. Whether it really was or not remains questionable.

Then, consider the aging of the blocks. Today’s makers disagree on how long briar should be aged in order to produce a good pipe. Some feel that once it’s dry enough to work without problems, it’s ready to go, whilst others insist that routinely aging their wood for upwards of eight to ten years is the only way to produce a superior smoking pipe. This aging of blocks for years isn’t much of a problem for a cottage industry producing a few tens of thousand pipes per year, but in the age of the industrialized pipe, the storage and management of millions of blocks for many years would present a huge cost, and since the vast majority of pipes being produced were meant to be affordable, utilitarian commodities, sold to the average man, not luxury items accessible only to the elite, this would have been unfeasible. For the high-volume factory producers "back in the day," it would not have been practical to maintain such a large stock for so many years; for economic and practical reasons, the wood would have been used as quickly as possible, with various techniques applied by some of the more exclusive makers, such as oil-curing or kiln-drying, in an attempt to improve the smoking characteristics of their finished product, and further distinguish their wares in a crowded marketplace. (Likely, these would have been the luxury brands, selling lower volumes, but at higher prices. The lesser marques made different claims.)

Finally, what about the wood suppliers, themselves? Today’s briar cutters have learned a thing or two from the past, and from working closely with the premium pipe makers who buy the wood they produce. Since demand for quantity is lower, whilst expectations for quality is arguably higher, burls can be more carefully selected, and can be processed more thoroughly. Tannins, saps and other impurities are driven from the wood through extended boiling, and the resulting blocks are more stringently evaluated for both consistency and flaws. In short, though we can’t know with certainty, it’s likely that today’s briar is actually of a higher overall quality than it was during the high-volume industrial days.

It’s not much of a stretch to conclude that the average pipe being produced today is in some ways better, perhaps even significantly so, than that of yesteryear, and offers a more pleasant early smoking experience than ever before. 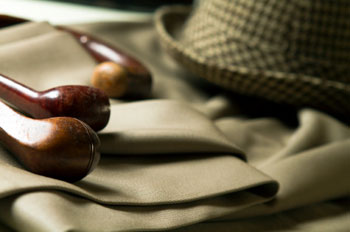 Of course, some veterans will still insist that "they don’t make ‘em like they used to," and this is almost certainly true. Many of those old pipes do have a great deal of appeal, not necessarily because they were fantastic when they were new, but because the pain of break-in has long since been forgotten, and the pipes have seasoned well through their years of being smoked. Much of the work of "aging" the briar in some of those old pipes was done by the smoker as he suffered through the challenges of those first harsh and acrid smokes, and once the corner was turned, once the ordeal by fire had been endured, only the joy of a well broken-in pipe remained. Through some sort of selective amnesia, we often forget the pain of these sorts of rights of passage once we’re through them. Yet the fears persist, at least in the minds of some pipesters. Fears breed expectations, and expectations influence experience. Maybe some pipes are difficult to break in because we expect them to be.

We live in the age of instant information, both a blessing and a curse, and it’s easy to forget that when the pipe’s popularity was peaking, thoughts traveled much more slowly and through much greater effort. When we have to work hard for what we think we know, we tend to cling more tightly to it. Tightly held but slowly propagated, the horror stories of evil, foul tasting pipes that would, eventually and with much pain, transform into faithful and fair companions became embedded in our little corner of culture, becoming part of our overall knowledgescape. I’ve certainly had a few experiences with old, "lesser" pipes that had remained unsmoked for years or decades before finding themselves between my teeth, and I’d be the first to say that some of those old stories may be well founded, but, I think things are different today.

Fewer pipes are being made now, both by factories and within the boutique pipe segment of the industry. With volumes being dramatically lower, smaller burls can be harvested, greater attention can be lavished on the process, and pipe makers can be more selective in the wood they buy, and have the luxury of being able to store and age it longer. The result is that it seems today’s pipes are of an overall higher quality, being much better behaved overall. I’m sure there are still challenging cases with pipes causing more pain than pleasure in those critical early bowls, but my suspicion is that these are the minority. Now, it’s only a matter of time before our collective knowledge catches up and uproots the old meme. Next time you’re faced with a new pipe to break-in, approach it with enthusiasm and joy, and it just might not be so tough, after all.