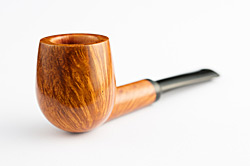 Some pipes don’t treat us well. They seduce us with their beauty, their charm, only to tease us cruelly, never delivering what they appear to promise. They can be likened to horrible relationships that we keep revisiting, either because of the intensity of our shallow lusts, or because we keep forgetting how bad they were, or because the wellspring of optimism continually bubbles to the surface, and in the reflection of its pool, we see the only the possibility that, maybe this time, things will be different, only to later discover that they’re not. I’ve had pipes like that. Pipes so beautiful, so perfectly constructed, so promising that I cannot help but go back to them time and time again, despite the fact that every smoke is more punishment than pleasure. Don’t think of me as a masochist, please; I’m just naïvely romantic.

On the other side of the pond are those pipes that, according to the conventions of today’s standards, are just wrong, but that smoke brilliantly despite their flaws. Perhaps the button is too thick, or the airway too narrow, or the briar not perfectly, precisely grained, or the gap between the end of the tenon and the mortise floor is large enough to serve as storage for a week’s worth of your favorite blend, or the proportion are wrong, or the blast too shallow, but none of it matters. Every bowlful is rich, dynamic, cool and delicious. These are great pipes, without question, their faults disappearing in the pleasure of the smoke they provide, but we’re not so likely to show those off at the pipe club. They’re just not good "arm candy." The question of why so many of us who style ourselves "Pipe Collectors" aren’t even more proud of the ugly beauties in our collections than we are our latest artisan acquisition would be an interesting subject for deeper sociological and psychological study, but I’ll leave that for the experts in those fields. I’ve got other fish to fry. 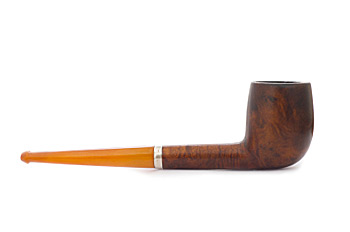 I’ve written before about my old friend Duke, who steadfastly believed that a pipe would be a great smoke if we expected it to be. I wish it were that simple. Or true. I wish that I could just think a pipe into delivering a great smoke every time. I’ve tried. I recall a stunning, slightly bent dublin, it’s tight, fine, straight grain flowing down the bowl like the Godiva’s tresses as she rode naked through the streets of Coventry, its top an undulating sea of spectacular birdseyes. Drilling? Perfect. Comfortable? Absolutely. Perfectly balanced, it would nestle between my teeth to become a part of my jaw, and fit my hand like a custom made glove. Everything about this pipe was simply magnificent, and I reached for it often. The pipe had one small but ultimately insufferable flaw; whatever tobacco I filled it with would taste like manure laced with napalm, and that’s being kind.

Every bowl began with great expectations. "This time," I’d promise myself, "it’ll be fantastic. It’s turned the corner, and will finally smoke like a dream." The cold puffs, those few tastes we take before lighting the tobacco, would be clear and promising. Even the charring light would bring hints of the smoking bliss to follow. Clearly, the pipe mocked my optimism, setting me up for the greatest possible disappointment. (Yes, it’s foolish to ascribe sentience to a block of briar, but perhaps no more foolish than believing we can will a bad pipe to excellence.) And then, almost from the first true light, this Decepticon transformed from pipe to flame-thrower.

I tried for well over a year to rehabilitate this beautiful briar malefactor. I smoked it to a thick cake with no improvement. I reamed it back to bare wood with similar lack of positive result. I treated the bowl with alcohol and salt, cooked it in the oven with activated charcoal, soaked the interior with trichloromethane, and even sent it off to a couple different pipe makers for their correctional ministrations. Nothing helped. At all. Sorry, Duke, but expectations didn’t eliminate the smoking torment this beautiful pipe proffered with every attempt. I finally gave up. Clearly, either Duke was delusional, or he’d never had a truly bad pipe, or the power of my expectation simply wasn’t sufficient to overcome the noxiousness of the hell-borne miasma that would emanate from this winsome but cruel goddess, this crucible of torture, almost from first match to final puff.

I ended up trading that pipe to a collector friend who was equally seduced by its beauty, warning him of its vicious ways. "No worries. I can make any pipe smoke well." Good luck. Years later, I saw it in a mailer (you can guess how long ago this was – who remembers mailers?) sent out by an estate pipe dealer in Texas. I called him. “Where did you get that, Steve?” He told me. I knew the guy. I called him, asked where he’d gotten it. In reverse, I was able to follow its trail back to the fellow I’d originally traded it to. That pipe had been on quite a journey. And, foolishly, in a moment of selective amnesia, forgetting its cruelty, I found myself with it back in my hands.

Too soon, painful memories were revived. Despite having been through the smoking hands of several other pipemen, the fires were still lit in this one, in more than one sense. It still captured my heart, still filled me with hope, and still smoked like the business end of an oxyacetylene cutting torch. I sent it back, and have no idea where it ended up, though all these years later, I still sometimes wonder. 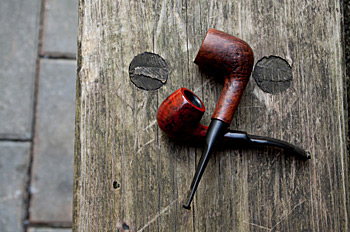 Why was I willing to subject myself to the dreadful smoke this pipe offered again and again, and yet again? Maybe it’s because it’s so rare for a pipe to smoke so badly, and I just want to believe that there’s a good smoke buried somewhere in every pipe, if we just keep digging. Fact is, though some pipes are wonderful out of the gate, most will deliver at least a good smoke after a few bowls, and some of those will eventually develop into favorites. Having spent over thirty years buying, selling, trading and smoking, I’ve had a very large number of pipes pass through my hands, and only a few have been real duds, but very rarely has a pipe come along that has caused as much torment as that special case.

Maybe it’s a flaw in my sometimes superficial character. Maybe I just can’t get past the artifice of the external glamour of some pipes, and pay too little mind, in these cases, to the pipe’s true, intrinsic beauty, its smoking qualities. Indeed, even after all these years, the beauty of a pipe will still sometimes overshadow a less than stellar smoking performance. There are pipes in my collection that I know will never smoke as well as expected (sorry, Duke), but I can’t seem to give up on them. They’re just so damned pretty …

As I continue along my evolutionary journey as a pipe smoker, it is with the hope that one day I’ll grow to be somewhat more objective, or at least less shallow, and not be so swayed by a pipe’s physical beauty, filling my racks only with pipes that deliver amazing smokes at every turn, irrespective of what they may look like.

In the end, it’s not the vessel, but the pleasure it brings that truly matters, and certainly, there’s a great deal of that to be found in appreciating the aesthetics of beautiful pipes, the grain, the finish, the sandblasting, the materials, the shape, the meticulous craftsmanship. There’s a lot to be admired there. But, sometimes, by focusing too much on the pipe, we might forget that what brought us to the game in the first place was the enjoyment of the smoke. This isn’t to say that we can’t have both; I’ve got pipes that are both beautiful and superb smokers. But, sometimes, we’re so caught up in the pursuit of the perfect tens that we neglect the less spectacular pipe that might turn out to be our smoking soul-mate.

There’s a saying: “The happiest people don’t necessarily have the best of everything; they make the most of what they have.” Words to smoke by.