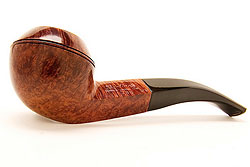 It starts with the anticipation; a few days, a week, two. The deal was made, then it’s all about the waiting. Some are more calmly patient than I am, taking an almost philosophical approach; "It’ll be here when it’s here," they think, and go about their day. I’m the anxious school kid who jumps up to look out the window several times a day hoping to catch sight of the delivery van rolling up my street. I think, at this point in my life, that’s not likely to change, nor do I really want it to. I love the anticipation, like the little ones waiting for the tapping of reindeer hooves on the roof, and jolly old St. Nicholas’ descent down the chimney.

Finally, there’s the knock at the door, the ringing of the doorbell, the dog’s bark to alert that someone, or something, is waiting for me on the porch. It’s the moment I’ve been waiting for; the opening of the door to have that little box finally find its way into my eagerly waiting hands.

For as long as I’ve been a pipe smoker, there’s always been something special about getting a pipe, shiny and new, or an estate piece in need of restoration, or something in-between. It could arrive as a result of a trade with a fellow collector from far away, or be one of those lucky ebay bids that went well, or a purchase from a pipe maker or one of the stores I deal with. It doesn’t really matter where it comes from, it’s a new pipe- at least, it’s new to me- and, receiving, and opening the box, getting the first eye- and handful of the new pipe is a pivotal point in our burgeoning relationship, and not one to be taken lightly.

So, box in hand, there’s bound to be a moment or two of reverence before ripping into it with wild abandon. No one is watching. I could lie, could make up a story about some elaborate ritual involving the donning of embroidered velvet smoking robes and matching tasseled fez, the recitation of verses from Cowper’s Conversation, whilst tracing mystical symbols in the air with an amber stem recovered from an ancient meerschaum (held by thumb, index, and second finger), and the burning of Latakia in a pipe-shaped censer, but I’d likely be found out eventually. Besides, after all the anticipation, why prolong things more than necessary? A moment is all it gets. Usually, just enough time to go to the drawer for a knife or a pair of scissors.

The box opened, packing materials strewn across table and floor, a compact parcel extracted, sometimes wrapped with so much bubble-wrap and strapping tape it could survive a small nuclear blast- I hate that particular test of my limited patience- and we’re finally getting close to the official introduction.

Finally, after excavating the pipe from the clear plastic and air-bubble sarcophagus in which it’s been safely entombed, the briar is in hand, and the next important part begins, the getting acquainted. First, the pipe is inspected from every angle, disassembled, examined under the harsh scrutiny of light and loupe, sniffed, probed, prodded and reassembled. It’s held in the smoking hand (mine is usually the left one), tested between the teeth, and finally, given a provisional stamp of tacit approval.

Then comes the harder part- deciding what to smoke, and when to smoke it. I’m sure I’m not alone in this; some pipes seem to beg to be smoked right away, while others almost demand a protracted courtship. Those latter ones, the high-maintenance pipes, are usually the expensive ones, the more strikingly beautiful ones, and, are almost always unsmoked ones. They have their charms, of course, a sometimes powerful attraction, or I wouldn’t have gotten them in the first place, but there’s something that keeps them at arm’s length when it comes to actually smoking them. For those pipes, the moment, the setting, everything has to be just right. I’ve had pipes in my collection for years before their time comes. Maybe it’s a disorder of my psychology, but, like my enthusiasm for new pipes in general, I don’t think this is likely to change without significant intervention.

MORE READING  The Virtue of Persistence

I love a beautiful new pipe, even a potentially temperamental one, as much as anyone, and sometimes, in the enthusiasm borne from being in the presence of the shiny new thing, I can inadvertently neglect the old friends. It’s like going to a party, and being charmed by the charismatic newcomer; the experience can be delightful, but it usually lacks the depth and ease of longer-term relationships. The new pipe can be like that. It gets all our attention. We talk to our fellow collectors about it. We show it off. We smoke it carefully, and treat it with extra care, not quite sure of how it will ultimately fit into our lives. In short, we romanticize it.

Then, one day, we’re reminded. We see them in our racks, those old faithfuls, and they beckon, "What about us? We’ve been pressed into fine service for years. Why have you been ignoring us?" Why, indeed?

There’s something really special about those old, experienced pipes, the ones that have been through it with us, that know our quirks, the ones that deliver a great smoke no matter what. They aren’t always the most beautiful, don’t always have the finest grain, and perhaps they’re not the ones made by the greatest living craftsmen, but they have something deep within them, something beyond the years of tobacco juices they’ve slurped up (so we don’t have to), that makes them great companions, and as with any relationship, that something is borne from the cultivation of respectful familiarity. They can be like putting on a pair of perfectly worn-in Levis, and just knowing they’re yours, and yours alone. They want to be filled with tobacco and smoked without excess ceremony. They’re the pipe equivalent of an old hound that always wants to go with you for a ride, even if it’s just to the grocery store. They become friends, not just trophies. When it comes to pipes that offer the most smoking pleasure, the latest and greatest isn’t always the bestest.

MORE READING  A Glass of Tobacco, a Bowl of Wine

It’s the comfortable pipes, the ones we reach for and smoke most often, that are destined to become our greatest smokers, providing we get off on the right foot to begin with. Years of smoking makes them richer, more distinctively flavorful, and smoothes out any rough edges. Over time, we get to know these pipes better, which tobaccos perform best with them, what packing methods suit them, or their preferred smoking pace. They offer more than just pretty charm. They are more than baubles.

When we return from our dalliances and get back to those old friends, there may be a moment or two of awkwardness. The first puffs might present us with just a tinge of stale resentment for our disregard, but soon enough, we’re walking in step, forgiven for our neglect, and celebrating our reunion with a satisfyingly rich smoke.

Some of my new acquaintances will grow to become old friends, and that’s what it’s all about. The only thing better than a new pipe, or a new friend, is an old one.