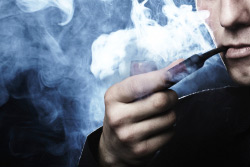 I’ve been saving the ash from my smokes for a couple weeks, partially in response to some vocal claims made by a few that smoking to the bottom is either nearly impossible, or that doing so almost guarantees destruction of the pipe through burnout.

Truth is, I’m actually pretty far away from what anyone would consider an “expert” at smoking a pipe. I’ve somehow stumbled my way to a passable technique over the years, and I enjoy my smokes as much as anyone can, but thrown into the gladiatorial pit of a smoking contest, I’m always one of the first guys to find himself missing limbs, and the idea of sitting down with a pipe minus a full lighter and/or a box of matches immediately at hand fills me with terror.

I tend to fill my pipes haphazardly, paying little (okay, practically zero) attention to the whole “hand of a child, hand of a woman, hand of a man” packing strategy that we read about in every pipe smoker’s primer, yet still, somehow, I’ve always managed to smoke to the bottom of the bowl almost every time, at the end, depositing nothing but the fabled “dry grey ash” in the tray. (Skeptical? There are witnesses. My legendary smoking prowess has been sung about by bards, and written about on forums, and if it’s on the internet, you know it’s true.) So far, it doesn’t appear that I’m doing any damage to my beloved briars, but it’s only been 33 years, so it’s still possible that one day, as reward for my continued abuses, one of my bowls will detach itself from the shank, and fall into my lap, a smouldering, cackling mass of malevolent ember and soot.

More seriously, I know I’m far from the only one who accomplishes this amazing feat, and, I’d be the first to say that, at least in my case, it is completely accidental, and arguably, absolutely irrelevant.

Not everyone cares about smoking to the bottom, and doing so or not doesn’t seem to have any relationship to the level of enjoyment a piper gets from the experience. I knew a veteran pipeman, a collector of some merit who had forgotten more about pipes, smoking pipes, collecting pipes than most of us will likely ever know, who was particularly fond of very old Three Nuns tobacco. He’d managed to acquire quite a supply, and bought more whenever he found it, thus being assured of always having some of these precious coins in his treasure chest. 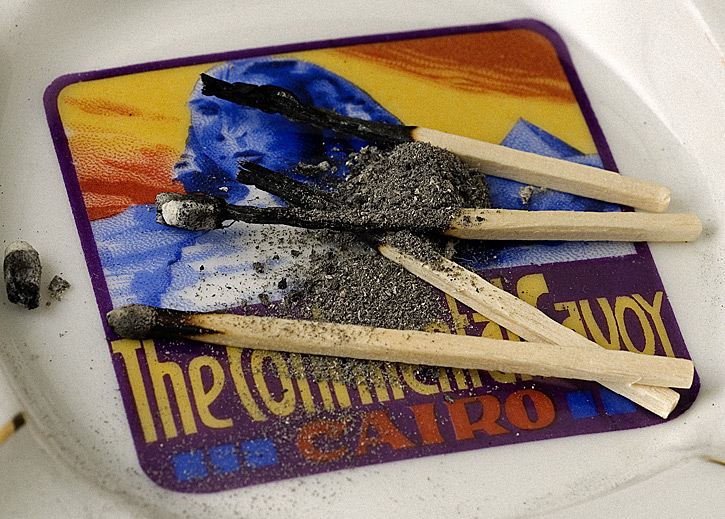 He also only enjoyed smoking the first half of a bowl. Seriously. He simply didn’t like the taste that developed in the bottom half, so he didn’t smoke his pipes much past the half-way point, no matter how many people told him he’d “ruin his pipes that way.” He was also a fiscally sensible fellow, and not wanting to waste his precious vintage weeds, he’d buy tins of the contemporary version, filling the bottom of his pipe with that, then toping it off with the old stuff and puff away, surrounding himself with fragrant, billowing clouds of unquestionable contentment. He enjoyed his pipes as much or more than anyone I’ve ever met, so who’s going to queue up to criticize his methodology? His pipes, by the way, didn’t seem to explode from his mistreatment, either.

The pipe world is filled with all sorts of “conventional wisdom,” little demi-truths that, through endless repetition, either become embedded in the collective consciousness, or are dismissed as absurdities. Another of those concerns breaking in a new pipe.

Many pipemen look forward to breaking in a new pipe with as much enthusiasm as they might a root canal. Historically, there may be some basis for the dread. At a time when most pipes were turned out of factories by the thousands, or even millions, in some cases, paying attention to each block of briar, the way the burl was handled after being dug out of the ground, cut into bits, boiled, dried and delivered, was impractical, if not impossible. Some luxury-pipe producers developed special seasoning techniques, of course, such as Dunhill’s famed oil-curing, but high-volume, mass-market pipes, produced at a time when a significant percentage of adult males smoked pipes, were commodity items, made to be sold as inexpensively as possible. At those production levels, maintaining a several year supply of aging wood would have been economically unfeasible. Briar was bought, stored briefly, and fashioned into pipes that were then packaged and sold, leaving the consumer with the sometimes bitter chore of curing and seasoning their new acquisition. Most pipe smokers took it on the chin, accepting this as a normal part of the “break-in” process. But, today, with fewer pipe smokers resulting in lower overall market demand, the fiscal pressures are different, and we can almost take for granted that our new pipes will be carefully crafted from briar that’s been more skillfully and deliberately treated from soil to stummel. The dread, though, seems to persist in the minds of many.

Though it’s still, and will always be true that the early bowls in a new pipe are never going to be the best that the pipe will deliver, I actually enjoy the process. I like the taste of the briar, the experience of gradually developing a cake, the way the pipe’s flavour and richness continue to develop with every fill, the way the patina of the wood’s surface develops over time. It’s a wonderful “getting to know it” process that I look forward to whenever I have the good fortune of finding myself with a sparkling new pipe. Going back to the realm of “conventional wisdom,” however, I’ve never subscribed to what I’ll call the “By Thirds” method of breaking a new pipe in.

We’ve read a thousand and one times that the best way to start a new pipe off on its journey is to fill it either 1/3 or 1/4 full for the first dozen bowls or so, smoking carefully, slowly, and only then, gradually increasing the level of tobacco in the pipe by quarters or thirds until, finally, after many bowls, the pipe can be filled to the top and enjoyed to its fullest. It’s always seemed a bit fiddly. In fact, more than one of my early mentors told me, unequivocally, that it was best to ignore this unnecessary nonsense. “Just fill it, smoke it slowly, and enjoy it.” And, so I have. Until recently.

Several weeks ago, a good friend, knowing that I have a strange fondness for the little things, gave me a beautiful Castello Sea Rock #10, the abbreviated brucianaso shape that I’ve championed for a few years, and that he’d never smoked. One evening, with my typical enthusiasm, I sat down to begin the process of breaking it in, of making it my pipe. Somewhere along the way, dedication to my usual method took its leave, and a wind of wyrd blew through the lair, compelling me to try the “By Thirds” method. 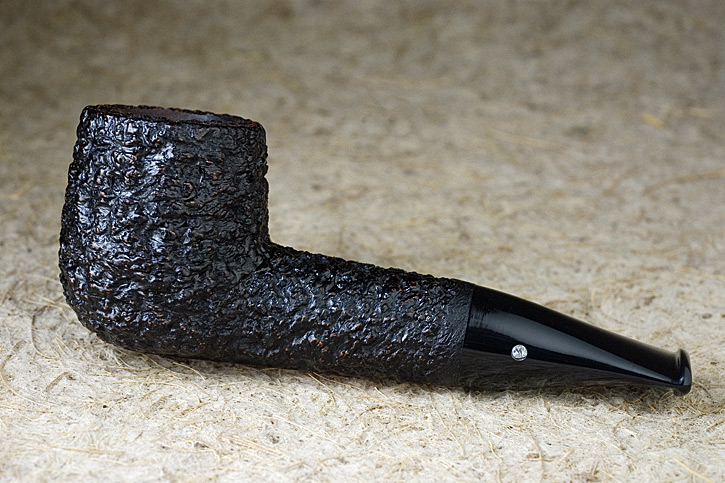 At first, it felt awkward, strange, foreign. Even when I only want to smoke half a bowl, like my old collector friend, I’ll smoke the top half. Pipes just never seem to perform their best for me with less than an at least mostly-full bowl. (We can speculate all day about why this might be the case, or even if it has any real merit at all, but it’s been one of my little personal demi-truths that has persisted throughout my pipe smoking life, and attempts to disprove it have always left me with less than satisfying results.) But, I persisted. Over the first few days, I smoked ten short fills, paying close attention to what was going on.

The first few mini-bowls smoked, expectedly, like they would in a new pipe. The taste of the wood was in focus, the characteristic brightness that seems to be something of a trademark of Castellos (and the pipes from some other marques, as well) presented itself as it always does, and, equally predictable, there wasn’t a lot of richness in the smoke, but the only thing really unsatisfying in the overall experience was that the smoke was finished long before I was. It took discipline to persist, but I was committed to the process.

When it was time to progress to the second phase, the 2/3 fill, something interesting was happening. The cake the pipe was developing was beautiful, if that adjective can be rightfully applied to what is essentially little more than a thin layer of carbon molecularly bonded to the briar’s surface. It was smooth, even, and finely, tightly crystalline, not at all coarse or spongy. The wood in the chamber had darkened noticeably, offering a smooth gradient from all but virginal and pure to very dark chestnut, and then cake and ash. And, more importantly, the pipe was starting to taste remarkably good. Even without the evolution that takes place during a long, full smoke, it was offering a deeper smoke than I expected so early in the process.

Today, my new little pipa corta and I have progressed to the third phase, and things continue to get better. I’m almost a believer, almost willing to admit something of an epiphany here. As much as I’ve scoffed at something I’d always considered overly fussy, I think I might be changing my mind. Of course, it’s only one pipe; maybe it’s one of the special ones, an outlier. It’s only a single data point, and one point don’t make no line. I need to repeat the experiment a few more times, and I will as the opportunity presents. But, for now, I’m willing to suspend disbelief and accept that, just maybe, there’s some truth rooted in the ground of this bit of ancient lore, and somehow, that seems comforting.