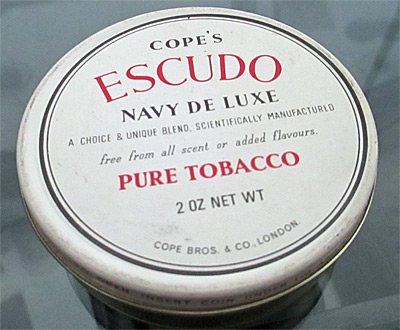 Don’t hate me because I smoked 50+ year old Escudo.

It all started when finally, at the last minute, I convinced E. Roberts (a.k.a. "RomeoWood") to come to the Chicago pipe show. He’s a connoisseur of many fine things and has written several articles for this publication. We hung out together for most of the show. He brought with him a tin of Cope’s Escudo that he thinks is from the 1950s or 1960s, so it’s somewhere between 50 and 60 years old. Part of the plan was to crack this open on Saturday night and smoke it with Brian (Levine) and I.

Saturday night started with Bombay Sapphire Martinis, jambalaya, and mini-burgers, and ended with the depletion of a huge bottle of Woodford Reserve and several bowls of different vintage tobaccos. We had a great time hanging out with the Guss brothers, and then moved on to Bob Swanson’s room … and the next thing I remember is having quite a challenging time getting out of bed on Sunday morning.

Romeowood left early Sunday morning, and we never got around to opening the Escudo. However, I later noticed a text message from Mr. Roberts telling me that I had something waiting for me at the front desk. I guessed correctly that it was the tin of tobacco – unopened – with a note thanking me me for introducing him around and to be sure I smoked the tobacco with Brian.

We opened it in the smoking tent around 5 pm on Sunday. The lid was pressure-fitted, not a screw-cap, and it took a little effort with a knife to pry it open. I am not sure if it was vacuum-sealed as I didn’t hear a whoosh sound when I opened it, but the tobacco was well-aged, and preserved nicely – still containing moisture in the roll coins. It was just about the right amount of moisture for smoking, or you could even let it dry out some and it would still be ok.

Compared to the current Escudo production, the coins were a little bit smaller and turned on their side (kind of like a 360 degree fan), rather than laid flat. They were also much more stuck together. The tobacco was tightly compressed into the can. Speaking of the can, or tin – it was much smaller than current production, but ironically, it contains more tobacco. The Cope’s tin holds 2 ounces of tobacco, which is 57 grams. The current production, and even the old A&C Peterson painted tins contain 50 grams. The Cope’s tin is the smallest in physical size, the old painted A&C tins are slightly larger, and the current production tins that have a paper sticker for the artwork are even larger in size.

Another difference is that the Cope’s Escudo was made in the UK, while current production is made in Denmark at the STG / Orlik factory.

Clicking on the below photos you can see that the tobacco is moist and has some sugar crystals. The tin aroma smelled like raisons and stewed fruit. To get the tobacco out of the tin, I had to lift on the paper doily as it was so tightly packed.

[Note from my housekeeper: She says the last photo above and the first 2 photos below look like pepperoni.]

What I’ve learned from going to several pipe shows is that many people are extremely generous with sharing very special, exceptionally aged, vintage tobaccos – so I did the same. Brian and I shared the tin with Raymond Lykins, Steve Morrisette, Rich Esserman (he used a normal size pipe, thank God), Rick Newcombe, John Seiler, and about 4-5 other guys I don’t recall specifically. By Sunday night, there was still three quarters of the tin left, and I gave it to Brian.

I smoked two bowls of the Escudo in my brand new Hilson Prince that was my last purchase of the show. Brad Pohlmann kindly commented that the prince pipe suited me well. (He declined the Escudo as he already had something going in his only pipe he had for smoking. He said he can only afford one of his own pipes, and he can’t be seen smoking another’s make. I find that ironic and funny.)

The flavor and aroma of the approximately 50-year old Cope’s Escudo was delicious. It was sweet, but not as sweet as I thought it would be. Another surprise was that the Perique, while adding to the stewed fruit aroma, actually displayed its’ pepper-like qualities. There were subtle notes of figs, and an additional surprise were Burley-like qualities of ash and a faint nutty taste, along with the expected hay and grass of a fine Virginia.

It was a great experience getting to open this vintage tin of Escudo, from seeing the old tin, how the tobacco looked and was packed, that it was still moist – and most importantly, that it smelled and tasted delicious.