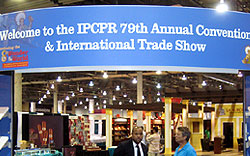 The world’s largest luxury tobacco products trade show took place July 17 – 21, 2011 at the Sands Expo & Convention Center, Venetian Hotel & Casino in Las Vegas NV. After two years in a row in New Orleans, the show came back to Las Vegas for its 79th year with an increase in attendance from last year. The IPCPR Show is the International Premium Cigar & Pipe Retailers Association’s annual trade show, where the industry showcases new products and retail tobacconists place orders. The show had over 250 exhibitors with more than 1200 booths. There were 40 new exhibitors this year as well.

Most people seemed to arrive in Las Vegas on Saturday, July 16, which makes sense. You get the benefit of the better airfare with a Saturday night stay, and hello!?!?! … Saturday night in Vegas! What more do we need to say? I love Vegas, and this was my 16th trip there in 9 years. I will be going back 2 more times this year, but you’ll hear about that when it happens. I stayed at The Palazzo, which is the mirror image twin of The Venetian with the two resorts connected, and really pretty much one in the same with the convention center right in the middle. Every room is a suite at the Venetian / Palazzo, and it is one of my favorites along with The Palms.

The official kick-off was Sunday, July 17th with the IPCPR sponsored opening reception. There was all kinds of free food and an open bar. As you can imagine, with free food and booze, the rather large room was packed. The reception was from 6 – 9 pm, but a couple of interesting ladies kept me in the room way past that until they kicked us out.

Monday morning there was an opening breakfast from 8 – 10 am with comedian Ron White as the featured speaker. If you know Ron "Tater Salad" White, you know that he always has a glass of scotch and a cigar when he is on stage. The guy is hilarious, and he likes to party. So Monday mid-morning after the breakfast was already over, I was falling out of bed asking myself, "how did Ron White make an 8 am breakfast and I didn’t?"

I was disappointed that I missed Ron, but I got lucky two days later. My sister sent me a text that my nephew loves Ron White and asked if I could I get his autograph. I said that Ron probably left already, but I would try if I see him. Fifteen minutes later, Ron walks right up to the Tobacconist University booth where I was about to take my final exam. I am now dubbed "The Best Uncle in the World" by my nephew as I got the autograph. 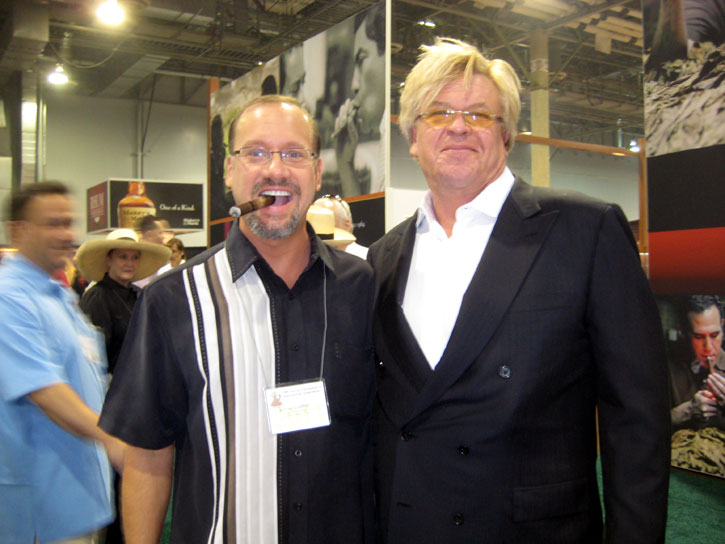 One of the highlights of the show for me personally was passing my final exam for Tobacconist University. I am now a Certified Salesforce Tobacconist (CST). Of a possible best score of 103, I got a 101. I am now working on my Certified Master Tobacconist degree, which I should be awarded by end-October. 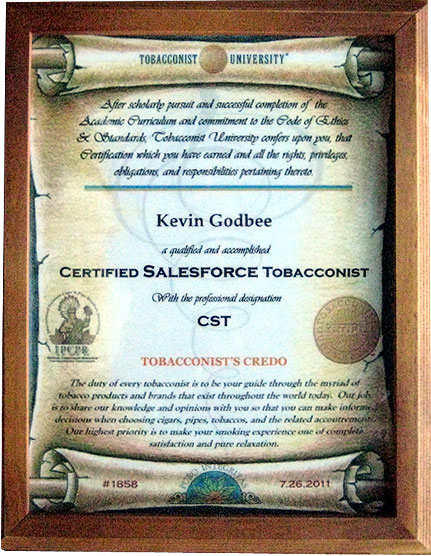 My friend Angye Fox says, "the IPCPR Show is like Halloween for adults". It is, and you don’t have to say "trick or treat". You just walk up to a booth and introduce yourself and they give you cigars or pipe tobacco to put in your bag. Half the time it is offered to you by a beautiful woman. I know, I know … poor poor Kevin. Occasionally, your bag of samples gets so heavy that you want to say "no thank you, no more samples please", but that would be rude. I actually had to ship my clothes home because my entire suitcase was filled with cigars and tobacco. The Venetian wouldn’t ship tobacco since a special license is required to do so.

In the past, my IPCPR coverage included specifics on loads of new products. At this year’s show, I spent a lot of time working on business development, market research and having meetings. I know it doesn’t look like it from the above photos, as it looks like I was just having fun, and I did. However, pictures of business development, market research and meetings is pretty boring.

There wasn’t time to document every single new pipe is that is coming out later this year, but there are four especially interesting new pipe tobaccos – two from Villiger and two from Mac Baren. I have smoked three of the four so far, and they are all exceptional.

I have to admit that when I first read the description of Cocktail Hour, that it didn’t appeal to me. It reads; "Cocktail Hour is a unique hand-stripped, spun-cut tobacco blend consisting of flue cured Virginia from the USA and Brazil, blended with air cured tobacco from Malawi. A flue cured wrapper leaf from Brazil completes the blend. Cocktail Hour has notes of pineapple and chocolate." That last part, pineapple and chocolate, didn’t appeal to me. But then I encountered Cocktail Hour in person. It smells, looks, tastes and smokes exactly like the popular and unavailable in the U.S. – Three Nuns.

If you live in the U.S. and yearn for some Three Nuns, then get Villiger 1888 Cocktail Hour. It is a dead-on exact match. I obtained Three Nuns when I was in Denmark last year, so I was able to do a direct comparison. Here’s my tin with my Nording Hunter Series Wild Boar. 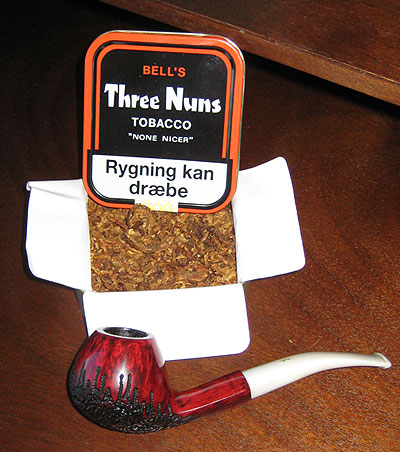 Villiger 1888 After Dinner is a navy flake style blend that looks and smells delicious. It is made from flue-cured Virginia and aromatic Burley, spiced with Louisiana Perique. The blend has a smooth, complex tobacco taste with an aroma associated with traditional Bali/Dutch tobaccos. If you like high quality navy flakes, this is a must try.

The New Villiger 1888 After Dinner & Cocktail Hour will be shipping later this month, so watch for them at your favorite tobacconist.

Villiger-Stokkebye was also showing new packaging on the W.O. Larsen line of tobaccos as pictured below. 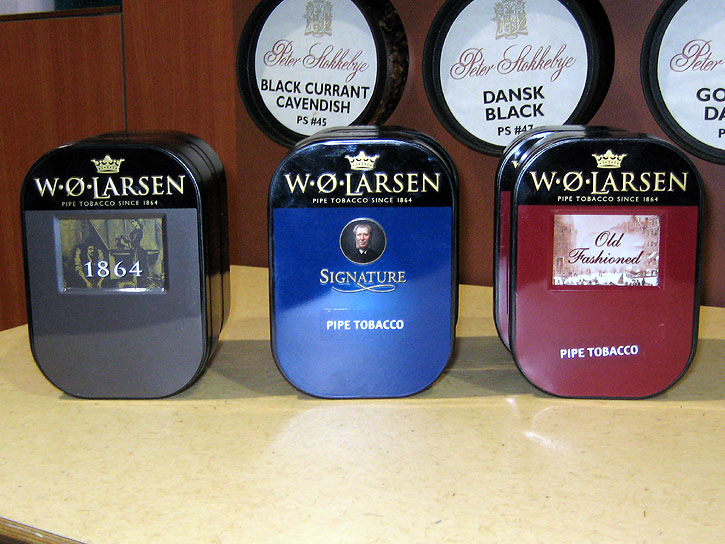 Next up are two new entries to Mac Baren’s 7 Seas line.

The 7 Seas line just keeps getting better and better. The two new entries are 7 Seas Red and 7 Seas Black.

I love the 7 Seas Red and I like the 7 Seas Black quite a bit. Mac Baren 7 Seas Red is described as "an aromatic blend of tobacco with light Brown Burleys, sweet rich Golden Virginias, and just the right amount of Black Cavendish."

The tin description, regarding the smoking flavor, is 100% accurate to what I noted before I even read  it described as; "Wild Cherry along with a very faint overtone of Fruit." I couldn’t agree more. I will add that it has a nice tartness to it, which is why it is described as wild cherry, and not just cherry. It’s quite flavorful without being too sweet, and it is nowhere near the neighborhood of cloying. 7 Seas Red is one of my new favorites, so much so that this may become my first regular smoke that is an aromatic. I generally like aromatics, but my usual personal choices are non-aros. I’ve been reaching for 7 Seas Red quite a bit lately.

My experience smoking 7 Seas Black was quite pleasant. It is certainly a high quality Black Cavendish with a spicy vanilla flavor. I easily detected the spicy vanilla, but I did not find the overtones of amaretto until I read the description. It’s nice to smoke a couple of aromatics that actually taste like the tin note implies.

All of the 7 Seas blends are American-style Aromatics – meaning that they are soft, springy, fluffy ribbon-cut. This makes it easy to fill a bowl, tamp and light, and creates a rich, flavorful and aromatic smoking experience.

Next year the IPCPR Show will take place in Orlando, Florida, August 3 – 6, 2012 at the Orlando Convention Center South. The show hotel is the Hilton Orlando.