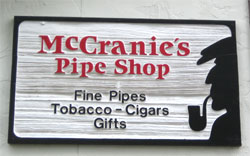 McCranie’s Pipe & Tobacco Shop in Charlotte North Carolina is one of the standout tobacconists catering to pipe smokers. Their reputation extends far beyond the borders of the second largest tobacco producing state. They have been serving pipe smokers for over 30-years. Their own brand of tinned pipe tobacco has put them on the map nationally. PipesMagazine.com’s Publisher, Kevin Godbee paid a visit to McCranie’s and met with Todd McCranie.

McCranie’s is the type of store a pipe smoker likes to walk into. When you see most of the space devoted to pipes and pipe tobacco, and the owner smoking a pipe, you know you will not be disappointed. McCranie’s knows pipes, unlike some cigar stores where there are no pipes, or they are merely an afterthought. This is a pipe smoker’s tobacconist.

McCranie’s is a full service tobacconist that opened in 1979. They have two locations in the Charlotte area; one on Park Road in Charlotte, which is open 9:00 to 6:00 Monday through Saturday. The second location is in Cornelius, (the Lake Norman area of Charlotte) and it is open 10:00 to 7:00 Monday through Saturday. The McCranie’s staff is knowledgeable about pipes, tobacco and cigars, and they have a very good selection of each. Todd McCranie says that they thoroughly enjoy smoking pipes and they love sharing their knowledge and expertise with others.

Tinned tobaccos carried by McCranie’s includes; McClelland, Mac Baren, Peterson, Ashton, Rattray’s, Orlik, Escudo, Presbyterian and several others. They also have their own bulk store blends, about 75 in all, and three tinned blends that have become popular with a fourth one on the way. [Editor’s note: Maybe we will see the new blend at the upcoming Richmond Pipe Show.] 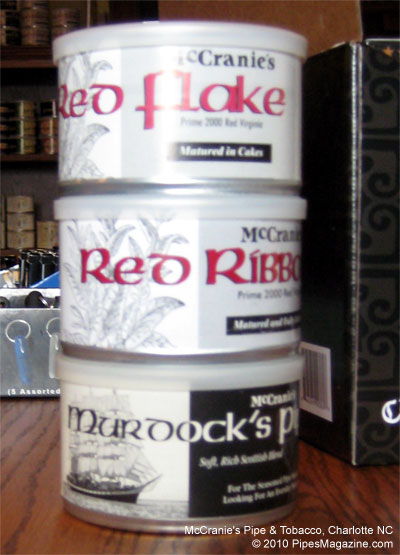 McCranie’s tinned pipe tobacco line-up started with Red Ribbon. It is a straight red Virginia from a single crop, which McCranie’s has procured exclusively. It is matured, pressed, rubbed out and then tinned. There is also the Red Flake version which is left in flake form. They are the two mainstays. They can be ordered by calling 888-523-8554 or going to the website at McCranies.com.

The third blend offered is Murdock’s Pike which has a small amount of Latakia and Oriental tobaccos. Todd describes it as a blend that is a cross between a straight Virginia and a typical English. He says "the Virginia comes through a little bit which is what we wanted to keep consistent in our tin line".

"Red Ribbon has been available since 1994 and this is our third crop. Obviously when you have a single crop you run out. You search out for the best, the crop that is going to have the combination characteristics that we want to keep the blend consistent."

McCranie’s also has their own line of pipes which has evolved over the years. It started with Todd and his father making pipes themselves. Then they sent Moroccan Briar that they had acquired to a factory in London to make standard, classic shapes for them. When that factory closed, they started working with Italian pipe maker Tonino Jacono, and Bill Taylor of England. They corroborated on pipes for McCranie’s and they were stamped with a TTT for Tom, Tonino, and Taylor.

"We offer a good value for really a high grade pipe. Of course with Bill Taylor’s passing we had to adjust that again as well. We just recently got a pipemaker to make the new Hillsborough line which is a freehand. That is the newest edition."

The retail price range on these unique pipes exclusive to McCranie’s is $125 to $175.

Kevin: You said the store has been in business for 30 years. How long have you been here?

Todd: "Well I have been here off and on the whole time. I was 14 when we opened and worked with dad through high school and most of college. I got out of college and had a real job. So for 10 years there I worked for somebody else. And then in ’95 my brother and I came, Trent (Todd’s brother) was here and I came back. We bought dad out in 99."

"My dad started the shop in 1979 and my brother an I worked on and off with him. He had a motorcycle accident in 91. Trent was here then. Dad hasn’t worked every day or very actively since then. But technically in ’95 we were pretty much full time here and in ’99 we bought him out completely. And then we opened our other store in 2001."

Kevin: I can see with the crowd you have today that it is obviously ok to smoke in here, which is nice.

Todd: Yes, everyone is welcome to to come and visit and relax and smoke.