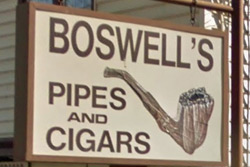 To believe your own thought, to believe that what is true for you in your private heart is true for all men—that is genius—Ralph Waldo Emmerson, "Self-Reliance" Essay, Boston, 1841

J.M. Boswell is the living embodiment of self-reliance, a belief that the ultimate source of truth lies within himself.

Lofty? Perhaps, but J.M. Boswell is a professional pipe maker of rare talent. He makes a perfect pipe because it is true to his code: it has to be flawless, or he will not let it leave his shop in Chambersburg, Pa.

You have no doubt heard of Boswell pipes. He has become, in many estimations, a kind of guru at the top of the mountain, dispensing vast knowledge about the mystique of pipe smoking.

If you haven’t heard, then get on your computer and go to the Boswell web page or on Instagram.

J.M. is one of America’s premiere pipe makers, although he will not tell you that. In fact, about all J.M. will say is, "I’m just like anyone else.

"I like what I do. It is a business. That is how I do it. You don’t have a business without people giving you their hard-earned money." 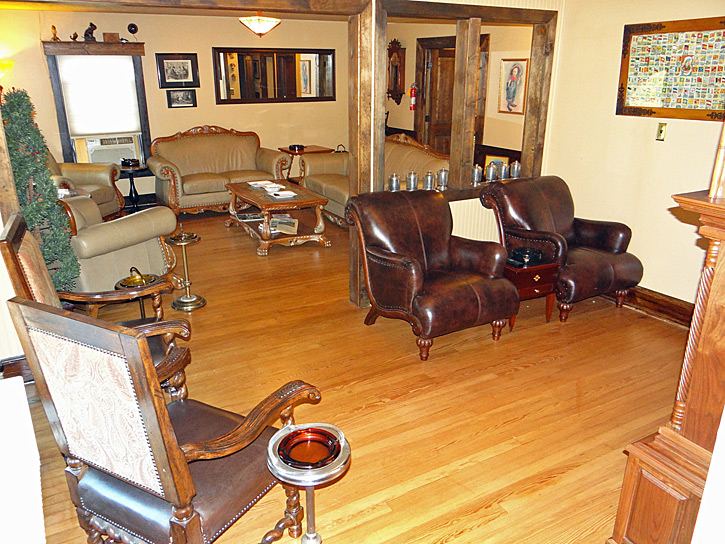 Take it from the Pipe Pundit. Simply stated, his pipes smoke! The holes are drilled for easy draw. The button is opened up to assist in effortless puffing. Boswell pipes are a pleasure, period.

The history behind J.M. Boswell and his shop in Chambersburg is a classic American story, coming from nothing to the status of master craftsman, an artist of the first rank. J.M. Boswell is the Antonio Stradivari of pipe makers.

The signs on his pipe store in Chambersburg explain most of the history. There are two of them, one over the store entrance and the other hanging on a post: Over the entry, it says: "J.M. Boswell’s Pipes & Tobacco." The sign in front of the shop says: "Boswell’s Pipes and Cigars." 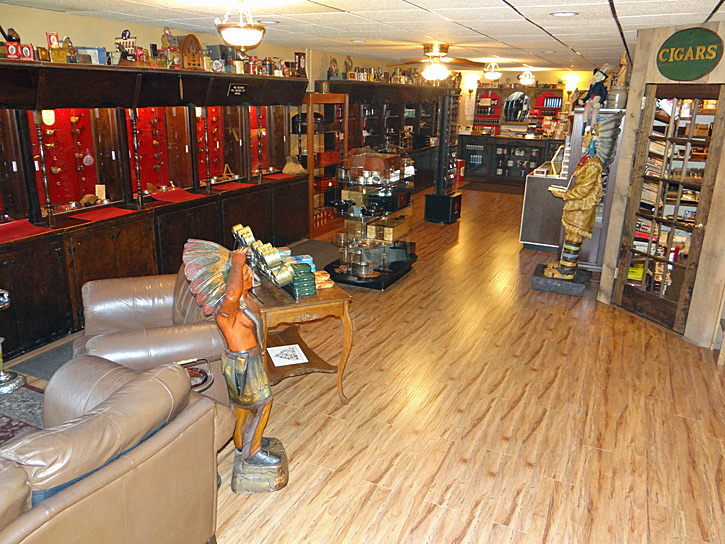 As you walk into store sitting area on left, large walk in Humidor on Right

J.M. has been making pipes "in the hands on procedure in old world tradition" since 1975.

We pick up the story with J.M. a 10-year-old whose family had recently moved from Elba, Ala., where he was born, to Carlisle, Pa., where his father worked as a master welder.

J.M. says his father could do anything with his hands, and when he was 10 years old, he also worked with his dad and discovered he, too, had a gift with his hands.

"From the time I was 10, I was never broke again," is how J.M. puts it. In other words, he realized he could always make a living with his hands. 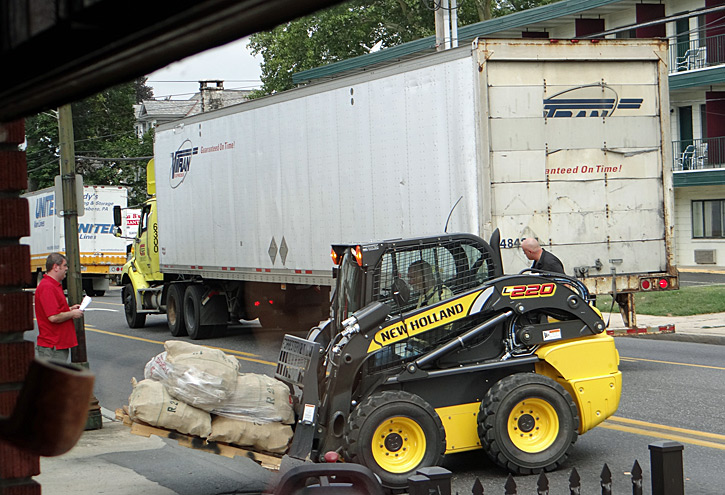 After moving to Carlisle, J.M. got a job delivering newspapers. Later, he began working with Richard Johnson, who owned a small pipe-shop operation in Carlisle. Johnson had worked for the legendary Weber Pipe Co. of Jersey City, N.J., as had his younger brother, Kenneth, father of J.M.’s wife, Gail. His wife’s aunt had also worked for Weber, one of the giant production pipe makers of the 1950s-1980s.

At first, J.M. says, he didn’t have much interest in pipes. Johnson was not making many pipes at the time, but within a couple of weeks, J.M. had caught on, and caught the pipe-making bug.

"If you show me something, I can do it, pretty much with anything."

Thus, the gestation of one of America’s finest pipe makers began. 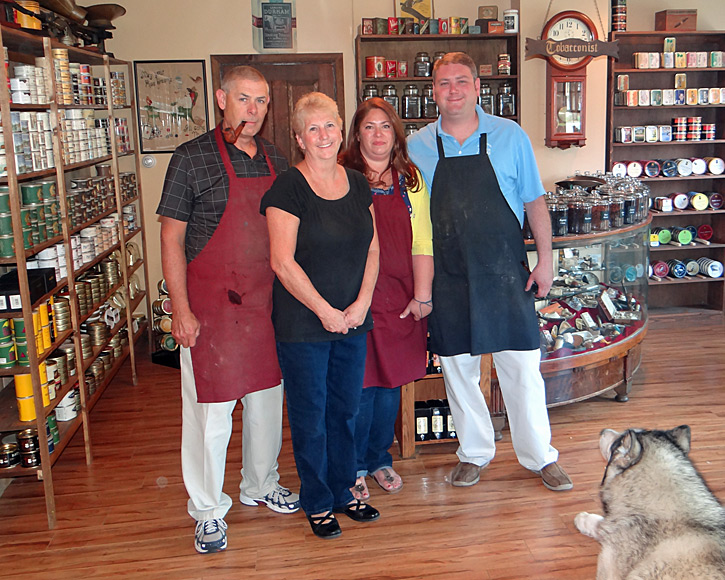 While passing through Chambersburg on his way to start a new job, J.M. saw a store on the town’s main street that had a sign in the window: "Will remodel to suit."

"I told Gail that’s where we were going to open our pipe shop."

A year later, he had to move to a store three times the size of the first one. In 1997, he moved into his present location, 586 Lincoln Way East in historic Chambersburg. 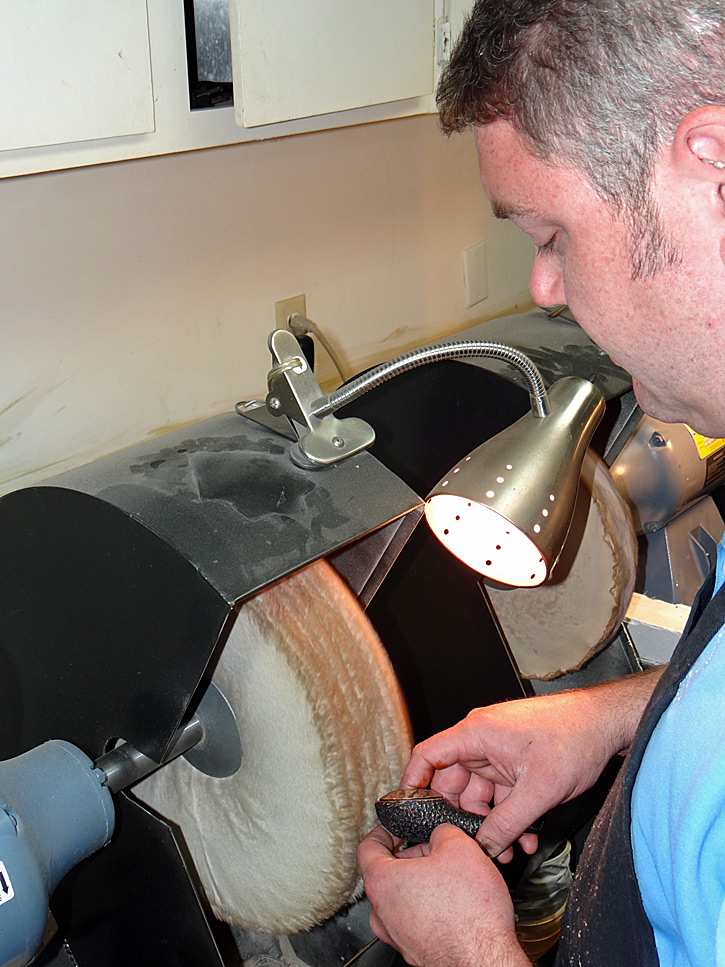 Everything he owned, he says, went into that business in the building that had once served as a pharmacy.

From there, he made pipes and restored pipes. His pipes sailed out of the Chambersburg shop to retail B&Ms around the nation under different names.

J.M. attended pipe shows. He sold his pipes wherever he could. He worked in his shop during the day, and carved pipes into the wee hours of the morning.

After beginning his shop in 1980, he was sending repaired pipes to more than 400 shops just two years later.

By 1990, J.M. was distributing his hand-made pipes to stores across the nation. His wife, Gail, handled the packaging and mailing. 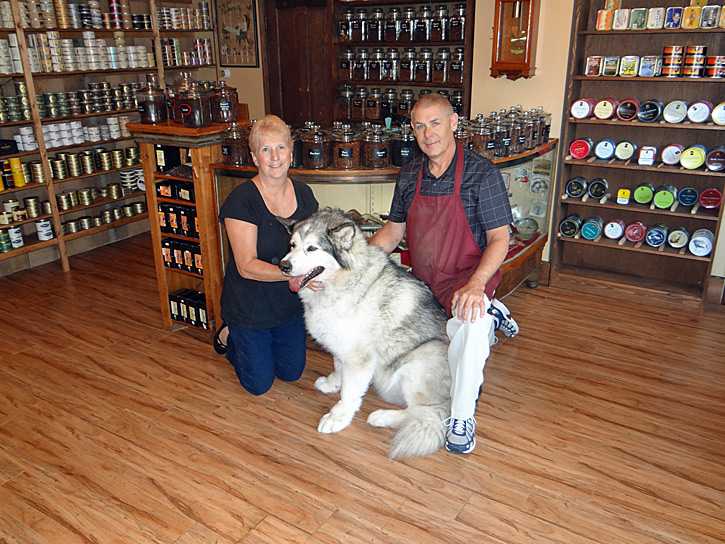 "We made a lot of pipes for private labels," J.M. says.

After a few years of this, J.M. says he had $500,000 invested in his business and was busy paying off the balance. He no longer had time to teach others the Boswell method of pipe design.

He either built or redesigned most of the machinery with which he worked. Many aspiring pipe makers showed up at his door, or phoned him, to learn the Boswell wizardry.

Then with his business flourishing, it became too time consuming, since many of those who arrived didn’t know how to use the necessary equipment to create a pipe.

"I don’t have the time (now) to do it. It is very difficult to teach the system we use.

As business increased, he brought in his son, Danny, Dan’s wife, Julie, daughter Rachel, who sells estate pipes on eBay, and life partner, Gail, his wife of 39 years. 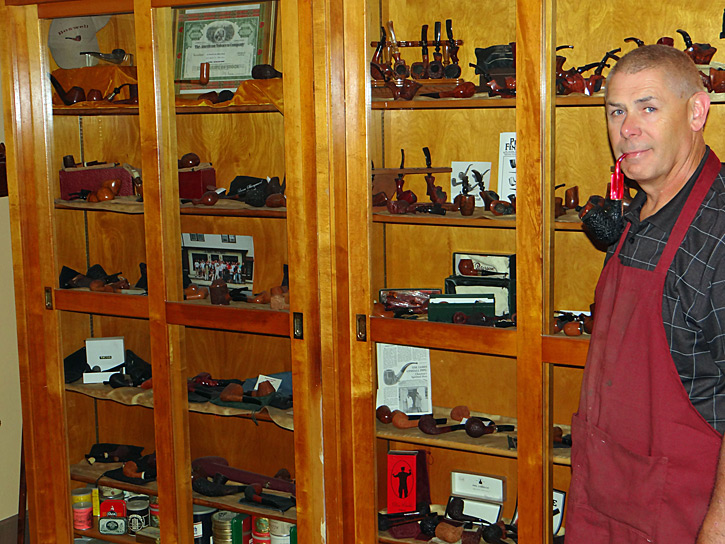 J.M. Boswell and some of his pipe collections

Gail shoots the photos and keeps up the web site, which was one of the first of the pipe shops to hit the Internet.

Dan has created his own method of working on pipes, which he calls the "weathered stone" look. The process is "done with old- style tools," to rusticate the pipe. It is like etching glass with a chisel.

Boswells is also known for its jumbo pipes, some so large they could past for tree stumps. Well, maybe not that large, but one style is known as the "grizzly." Yeah, it’s big. It’s bad.

Also in the Boswell lineup are shot shell pipes, which have a shell as the band around the stem; and J.M.’s famous nose-warmers, just right for a jacket pocket. 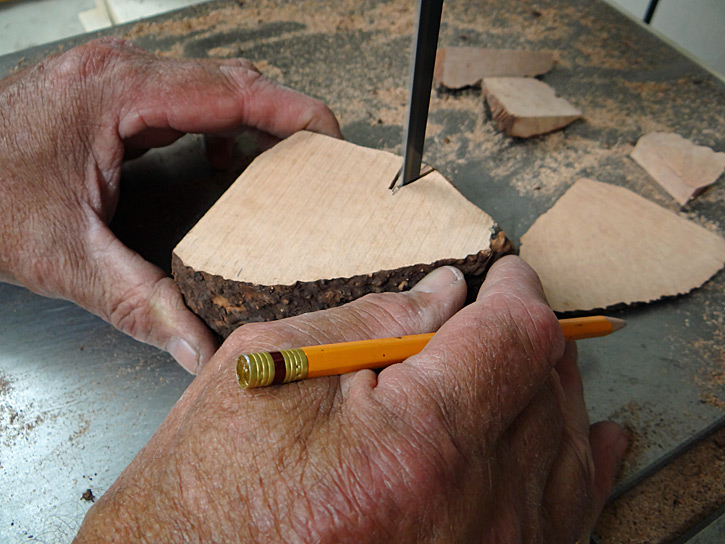 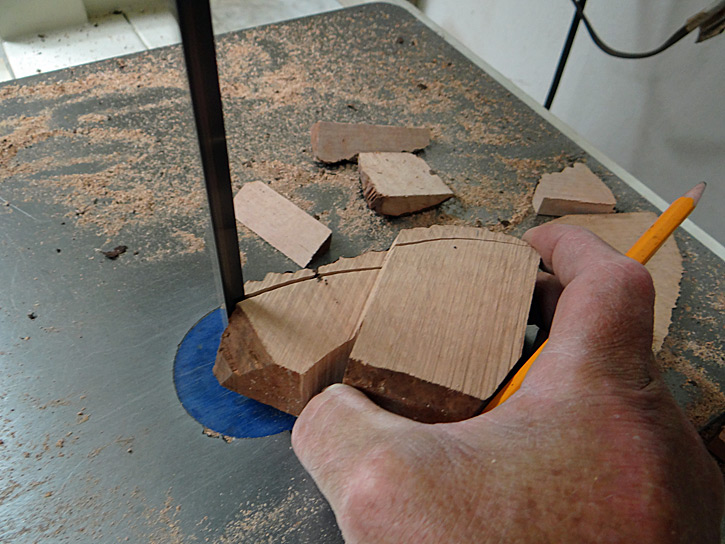 Julie handles phone orders while J.M. and Dan work on pipes and tobacco blending. Make no mistake: despite what you may have heard or read, J.M. Boswell creates his own blends. There is no relabeling a manufactured blend in the Boswell world. 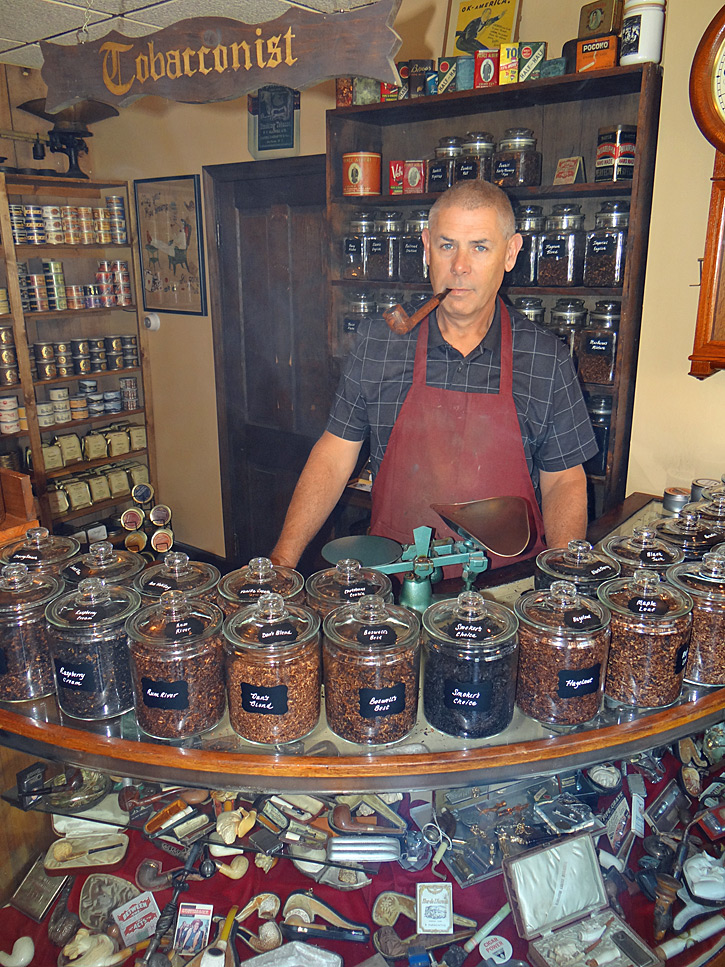 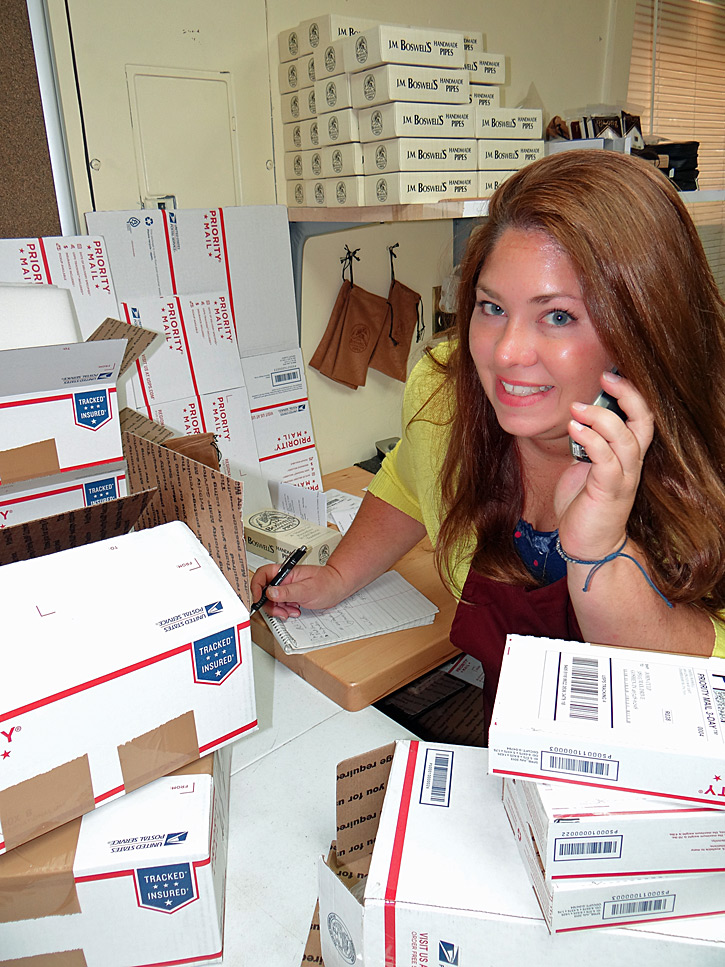 J.M. takes blending seriously. For instance, his famously popular Northwoods blend took him over three years to perfect before he even allowed it in his shop.

J.M.’s philosophy about pipes and pipe making is fairly simple:

The first requirement is that a Boswell pipe has got to "smoke good, look good and be priced so people can afford to buy them."

His pipes sell to the man-on-the-street, the wealthy billionaires who want their company logo on the pipes, and once even to a monk.

And with that in mind, J.M. says he puts in 18 hours a day, seven days a week and has never had a vacation since starting his business four decades ago.

"You are not going to make it if you don’t do that," he says.

And then there is the J.M. approach to honesty. It goes like this:

"You got to do it right. I’ve never cheated anybody. I’ve never made a bill I didn’t pay. I sleep good at night, because I don’t have to worry if I’ve done somebody wrong." 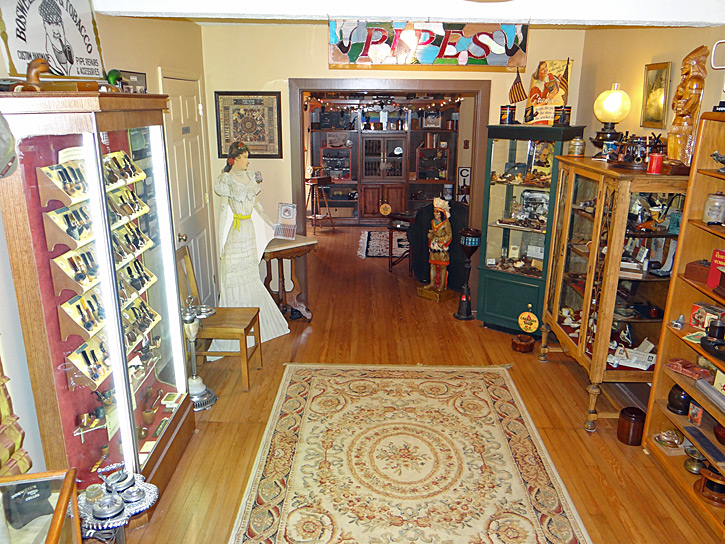 About his briar, J.M. says just like everyone else making pipes today: most of the good wood comes from the Mediterranean.

However, one other little detail separates J.M. from the pack. The briar merchants he deals with go back years and years.

With many of his contacts, he is into second and third generation with a particular family of briar dealers.

He won’t take briar that will require fills, he says, and his merchants know that.

MORE READING  An Interview with Joel Sherman of Nat Sherman

J.M. has never visited the briar dealers in those Mediterranean lands. He never sees the wood before it arrives.

"They know what I want," he says. "I just wire them the money." He never advances money before the blocks arrive, either.

The pipe-making process is all Boswellian philosophy, just like everything else in the shop.

The hand-tooling part is also simple: band saw, drill press, sander. He drills all the holes in all the pipes.

"All the air holes are (drilled) free hand," he says.

J.M. built the machines to do that job. "I don’t use any jigs for that."

He designed chucks to drill the tenon hole to ensure it is flush. Other than that, he says the rest is all free hand drilling.

As for the Boswell tobacco blends, he has been at that for 40 years as well. He continues to mix his own blends, buying from well-known manufacturing names and then applying his own recipes.

Only organic food flavorings are used in the old fashioned-way of putting the tobacco on cookie sheets to add the flavoring.

"I have a soft palate, so everything we blend, we blend it to be soft."

He has heard all of the naysaying that his blends are simply re-labels from major manufacturers. Not so, says J.M.

"We hear all kinds of stuff. Heard it forever. I don’t read the press or look at the pictures of pipes.

"All it does is create negativity and make you feel harsh about other people.

"We have 28 blends and that is it. It takes forever to have a new blend."

As for sales, Boswell pipes and tobaccos are sold worldwide.

"Even to some countries I never heard of," he says.

Just one of the many reasons for Boswell’s success is another one of his basic philosophies:

"I love my store and love my customers. It is most gratifying. I meet the richest guy or the fellow who pays me $5 a week to put a pipe on layaway."

"I’m not better than anyone else. I’m just making sure my family is taken care of and the bills are paid," J.M. says.

"We don’t make pipes we like. We make pipes you want. We make ’em to sell, and that is the bottom line."