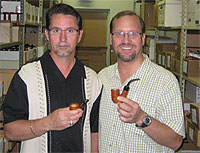 F.G.T. Enterprises is the wholesale company that owns Edward’s Pipe & Tobacco in Tampa FL. They are a wholesaler and distributor of tobacco products and accessories. In addition, F.G.T. manufactures a line of handmade pipes, and hand-blends a line of exclusive pipe tobaccos. The name stands for "Frank and Gordon’s Team".

I accidentally discovered F.G.T. when I paid an impromptu visit to Edwards for an interview I found out that "the boss" was at a different location, the wholesale and manufacturing division, so I would have to go there for the interview.

With no advance notice whatsoever, Gordon Smith, Vice President of FGT granted me an interview. He spent all the time we needed to talk and gave me quite an interesting tour of the pipe finishing equipment and warehouse.


My dad was with me during this visit. As a retired machinist / mechanic, he was intrigued by the on-site equipment used in the hand-made pipe finishing process and asked some of the following questions.

PipesMagazine.com: What, what’s the name of that machine?

And what does it do?

Gordon: It makes the tenons on the pipe stems.

Gordon: This is a bore mount machine and what it does is, is it makes the holes for the tenons. There’s a drill, an inset drill, that also makes the tenons actually in the pipe. This is a machine that when the air hole is too tight, it will bore that out.

This device bends the bits. See when all the bits come to us, whether it’s a bent pipe or a straight pipe they all come straight. So we have to bend all the bits.

PipesMagazine.com: How do you bend them without breaking them?

Gordon: So, what this does is this heats up and the pipes sit in there like that. And you can do one, two, three, four, … up to 26 pipes at the same time.

PipesMagazine.com: And what is that called?

Gordon: A bit bending machine. It heats up the bit and we bend them by hand.

PipesMagazine.com: What are the stems made of?

Gordon: It’s Vulcanite from Italy. Most of our production today is from Italy and Spain and we do some finishing and repair here in Tampa. We use some Algerian Briar that we can still get, and we use some Corsican. Some the other briar comes from the Mediterranean. But, mainly Corsican and Algerian.

PipesMagazine.com: How long have you been in the pipe business?

Gordon: Coming up on 50 years. We actually had a factory that we’re exclusively working with for years in France; but in 1971 we decided to build our own and we had a factory where we had 29 people that were making pipes for us.

We shifted our production back in 1978. And in 1978 my father and mother went to France and we bought a factory there, in St. Cloud that we ran from 1978 until the middle ‘80s. And we closed it because the French really never, they never really produced the product to our specifications the way we wanted them to. So, we had already arranged for other production in Italy and Spain, and we started having all our pipes produced in those two, the two factories there. That we’re working with today; still today.

PipesMagazine.com: There’s the pipe manufacturing and there’s the retail side. Two separate businesses?

PipesMagazine.com. So the, for the pipe manufacturing side are you producing for just yourselves, or for …

We’re still selling a lot of Edwards Pipes, but we’re doing a lot of private
label with a lot of other companies, some of the Tinder Boxes as well.

We have over 3,000 different other items that we sell such as; Xicar cutters and lighters, Integral and Vertigo lighters as well. Missouri Meerschaum Corncobs. We distribute BJ Long pipe cleaners. Zippo lighters. We have some of our own products that we produce and distribute. We have a line of pipe cleaners called Clean and Cure.

We produce several lines of humidifying fluid for, for Cigar Humidifying Systems, called, Quick Start and Glacier Mist that we produce here. We sell Ziplet bags; we sell several lines of flavored cigars. So we sell a lot of other things, really. We also manufacture, pipe tobacco here for the Edwards Pipe & Tobacco. The gentleman that was stamping the pipes for us there; he’s our tobacco master. He does all the blending for all of our Edwards Stores. We produce all the pipe tobaccos for all the Edwards Stores; the 19 franchises that we still have. And we also do some private label tobaccos for some other shops as well.

PipesMagazine.com: Based on all the different types of products you distribute it seems you would have a fairly good pulse on what’s happening in the market place. Has business in the pipes market increased lately?

Gordon: A bit more in the moderate ranges – in the retail price range from $40 to $80 has increased.

That end of the business has increased. The biggest problem that we’re running into, and from state to state, is anti-tobacco legislation being passed. That’s really impeding the process of growing our business.

PipesMagazine.com: As far as tobacco tax and smoking regulations?

PipesMagazine.com: And it’s different in every state.

Gordon: Yeah, I mean this issue that we’re facing right now in the state of Florida; we’ve just had the federal tax that’s been passed. The S-Chip Tax, and now in Florida they’re trying to pass this $1.00 per ounce increase. That’s really going to hurt the pipe tobacco business here. (Editor’s note: The new taxes in Florida went into effect July 1, 2009)

PipesMagazine.com: That’s too bad. So you mentioned the trend of the mid-range pipes, $40 to $80 retail is increasing. Are there any other trends that you’re seeing in, in the pipe business or pipe market that you think is noteworthy?

Gordon: We’re seeing a lot of the shops that have opened up as cigar stores are finding that they need to carry some of the pipe tobacco products and sundries. And they’re becoming really more full service tobacco shops than just cigar stores today.

Pipes and pipe tobacco, and the other accoutrements that go with it fit go, right along with the business that they’re already in.

So we’re seeing some cigar shops that are picking up basket pipes. Starting with with more of the lower end product and then eventually graduating into having some nicer pipes in the $30 to $100 range.

PipesMagazine.com: Back in February for International Pipe Smoking day, The Wall Street Journal published an article and they were talking about how the younger generation like the college crowd is starting to smoke pipes.

Gordon: Yes we are seeing that and another product as well, the Hookah.

The Hookah is more of a social environment that they’re looking for. Rather than, being in a tobacco shop rather than being in the, in the bars you know, where they might have been before. So, yeah we’re seeing a, a trend in that direction.

PipesMagazine.com: Getting back to pipes, what is the ratio of bent pipes versus straight pipes that you sell?

PipesMagazine.com: And does your clientele have an interest in corn cob pipes, or is it primarily briar?

Gordon: Well we sell a lot of corn cobs too. There’s only one company that produces them. It’s a company out of Missouri – Missouri Meerschaum.

PipesMagazine.com: As far as the store goes; Edwards, how many brands of pipes and tobacco do you carry?

Gordon: We mainly focus on selling our own pipes obviously, the Edwards, but we do have some Dunhill’s. We do sell some, some Italian pipes; some Baritinis, some Cristianos, some Christon pipes. So I would say that we probably have eight or nine different lines of pipes that we sell, but as I said we are mainly focusing on our own brands. As far as tobacco; McClellan’s, Mac Baren, Dunhill when it’s available.

PipesMagazine.com: What’s going on with Dunhill? There’s rumors that it’s not being made anymore.

Gordon: From what I understand it’s a licensing issue right now. Originally I had heard that the folks at Stokkebye were going to be bringing it in, because the people that produce the Dunhill brands today produce for them; but then 30 days after I had heard that CAO was going to be bringing the line in … At this moment there’s not a US distributor.

The US distributor was Lane Limited, and then when Lane got purchased by a group they lost the license for the distribution of it, and right now it’s in flux.

PipesMagazine.com: When we were standing outside before you told me about the origin of the business, and how it started. Edward was your father’s partner and how it evolved.

Gordon: Yeah, the name of, the namesake of our retail stores; Edwards came from … It was a gentleman by the name of Edward Reilly and my father Frank Smith were the two partners in the business. The reason that they used Edward’s name was right across from our flagship shop on Henderson Blvd. is Channel 13. And Edward had a TV show that he did, or had been doing for the last 20 years there called 3-D Danny, and so he had a name recognition here in this area, and so that’s the reason why the stores were named Edwards. And between my father and him they had really set up a … They had a focus where they wanted to start franchising these type of stores, and by 1967 we had three stores. By the mid ‘70s we had 20; by the late ‘70s we had 30.

So at one time we had 32 or 33 Edwards stores from California to Florida.

PipesMagazine.com: And then today you have 19?

Gordon: We have 19 franchises yes.

PipesMagazine.com: And you were saying that it was your father and Edward that started the business?

Gordon: My father and Edward, yeah.

PipesMagazine.com: And then he bought out Edward?

Gordon: We can and we do. We use Algerian, Corsican, and some other Mediterranean wood.

PipesMagazine.com: Would it be correct to say, or incorrect, that the natural resources of Briar are being used up and it’s becoming more scarce?

Gordon: It is. Yes, most definitely. I mean what we’re finding in this business, in the market right now is one of the reasons for the spike is there’s not a lot of people selling pipes. You know, there’s really not. You’re seeing the manufacturers that were overseas at one time; it’s down to a handful of people that are making pipes. So there’s just; I don’t want to say it’s a dying breed of people that are producing today, but it really is. I think the younger generation is not really looking to get into it because it’s hard work, it’s dirty work.

PipesMagazine.com: Right, as far as the production.

PipesMagazine.com: Thank you for taking time out of your day to talk to me when I just knocked on your door unannounced.

Gordon: You are quite welcome. 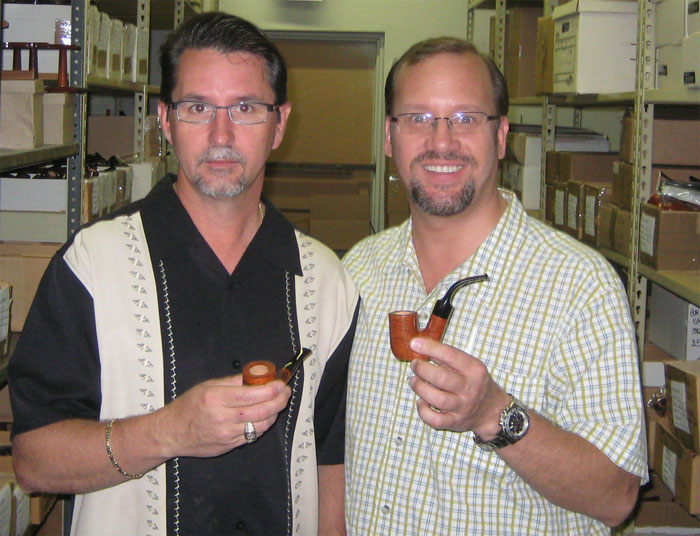