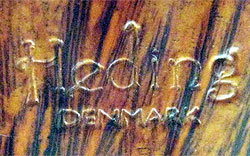 One of my favorite books is "The Alchemist" by Paulo Coelho. The basic message of the book is to throw away conventionality and practicality, and to follow your dreams instead. Then you will find true happiness and success. This message is prevalent throughout many of Coelho’s books, and one I subscribe to. However, it is not an easy thing for most people to do. That’s why I took great delight in meeting a man that has truly followed this philosophy.

Then he discovered pipe making.

Peter says it was back in 2003 when he was inspired by a TV interview with Anne Julie, a well-established Danish pipe artisan. Right away he knew this is what he wanted to do. He started carving pipes by hand as a hobby in the evenings. Then he bought some briar from renowned Danish pipe artisan, Tom Eltang. This lead to Tom inviting Peter to his workshop. They became friends and over a two-year period, Tom taught Peter many important things about free-hand pipe making. Peter was still working his regular job as a molecular biologist, until Tom brought some of his pipes to the Chicago Pipe Show in 2004 and 2005.

In the Spring of 2006, after 3-years of part-time pipe making, Peter Heding handed in his letter of resignation as a biologist.

Heding Pipes are truly works of art of the highest quality in workmanship and functionality. Peter personally hand selects each individual briar block and only chooses the superior quality wood. The stems on Heding pipes are hand-made from solid German ebonite. Often exotic woods, bamboo, and ivory are integrated into the pipe designs. The grading system contains 4 grades; Bronze, Silver and Gold. A small circular bronze/silver/gold spot is integrated in the pipe near the stamp and every Diamond-grade pipe has a small Zirconia’s diamond embedded in the pipe near the stamp.

During our visit to Peter Heding’s workshop, we took video of him demonstrating how he starts work on a new pipe.

Here’s how Peter Heding does it:

Peter Heding Pipes can be found in the US at SmokingPipes.com.