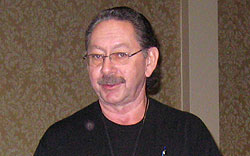 The 2nd Annual West Coast Pipe Show was held during the first weekend in November in Las Vegas, Nevada, and PipesMagazine.com was there covering this unique event for pipe enthusiasts on the west coast. Bob Swanson, the pipe maker behind Perry White Pipes presented the first seminar of the show, which was informative, entertaining, and even slightly provocative depending on your opinions of what the "rules" are for pipe smoking. PipesMagazine.com’s Cynthia Sargent spoke to Bob for a few minutes on camera, so please enjoy our brief video interview with pipe maker and collector, Bob Swanson.

Bob’s seminar covered some interesting areas for all pipe smokers, experienced and new alike. It’s always a fun conversation when you are discussing the "rules" of pipe smoking. At PipesMagazine.com, we’ve always said, "if you are enjoying it, you’re doing it right".

However, Bob is an experienced pipe maker, pipe smoker, and pipe collector – for 43 years.
He’s learned a lot of things that years of experience can bring. Whether we do things the way Bob does or not, it is interesting to consider trying some new methods, learning new things, or just confirming what you already knew.

Here are some of the highlights from Bob Swanson’s presentation on Dispelling Rumors and Myths from the Supposed Pipe Gurus.

Bob emphasized that these are his opinions …

– Fills on pipes – Of all the pipe makers Bob knows (in the Americas and Europe), including himself, that make high quality hand made pipes – no one uses fills. If he finds a flaw in the briar, he will smoke the pipe himself instead of hiding the flaw with a fill and putting it up for sale. Real pipe makers don’t use fills. However, Bob concedes that almost every piece of briar will have some type of flaw like a tiny pin hole sized sandpit. Many times a skillful pipe maker can carve or sand it out, or sandblast the pipe. However, if a blemish cannot be removed, then the pipe is removed from saleable inventory.

– Cake in your pipe – Yes or No? – The answer is yes. If you are wiping your pipes out with a paper towel after smoking you are not going to build up a proper cake and you are not realizing the best experience possible from your pipes. Bob referenced the book by Alfred Dunhill which went out of print in 1935, "The Gentle Art of Pipe Smoking", where Dunhill himself described the method of creating a cake where you don’t fill it all the way at first. You fill the pipe 1/4 and smoke all the tobacco. Next time, fill it a little more, and so on until you are finally filling it all the way. This allows the cake to build up evenly from top to bottom. Of course, you can also over-do the cake.

– Pre-coated bowls are better – the pipe will smoke better when it is new and the pre-coating will help build up a natural cake. However, Craig from the Seattle Pipe Club (in the audience) expressed that some pre-coating are "noxious" to him. "Waterglass" is a chemical coating. Food-grade coatings are preferred, with the main ingredient being activated charcoal. To make your own coating, get deactivated charcoal in a drug store and mix it with a small amount of honey.

– Packing Your Pipe Properly – As Nike would say – Just Do It! Don’t worry about all these fancy ways to pack your pipe. Some of the special methods for packing your pipe are actually counter-productive to building a good cake. You must smoke to the bottom of the bowl. It might be unpleasant in the beginning with a new pipe, but it will be the best part in time. Packing methods that have you leaving a space at the bottom of the bowl are not good for the pipe. You should pack lighter at the bottom and harder as you go up.

– Don’t fill your pipe to the top – the tobacco rises and burns the rim of the bowl. Fill it 3/4 of the way.

Here’s the author doing it wrong 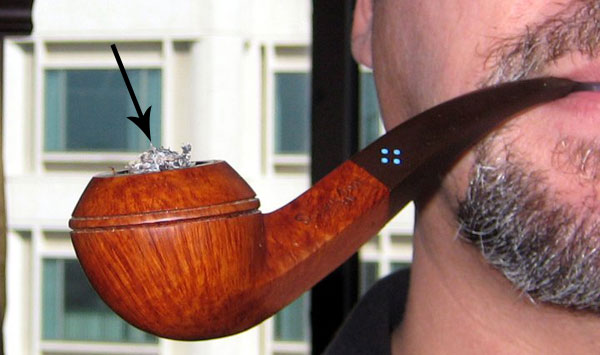 – Do Pipes Breathe? – Yes, they do … or they should. Stay clear of super shiny pipes that have been shellacked or varnished. They will not breathe. The pipe won’t smoke as well. Cross-cut grain breathes better than straight grain, making for a cooler smoking pipe.

– Hand cut bits vs. pre-cut bits – can you tell the difference? Most people can’t, and a pre-cut bit is not necessarily inferior. The main difference is that a hand cut bit will add $100 to a pipe’s price because of the extra work involved. Pre-cut bits still have work put into them with chisels and sanding so each one can be made unique, so there still is hand work done on them.

Bob also revealed what is now known as "Sand Carving" a pipe as opposed to "Sand Blasting".

Jim Cooke is a well-known, award winning pipe maker that uses "sand carving". Bob considers Jim to be the "Picasso of Pipe Makers". Many of his pipes have very intricate, deep carvings. He had been doing this for years before it was revealed how he did it. No one could figure it out. Part of the secret is that he uses a special type of sandblaster that has a much smaller hole for the particles to exit. Think of sandblasting as a course process, and sand carving as a very fine intricate process. There was a lot of speculation of how Jim achieved the look of his pipes until he actually went to Chicago and showed a bunch of other pipe makers how he did it. This special process was not given a name until recently. It is now referred to as Sand Carving.

Bob Swanson and Andrew Marks will be having a regular column in the NASPC (North American Society of Pipe Collectors) Newsletter, "The Pipe Collector". You can read more of Bob’s and Andrew’s thoughts and ideas on how to best enjoy your pipes there. The name of their column is "The Pipe Maker’s Opinion".