IN SEARCH OF PIPE DREAMS: A METAPHOR FOR HIGHER SMOKING PLEASURES
By Steven Van Puyvelde 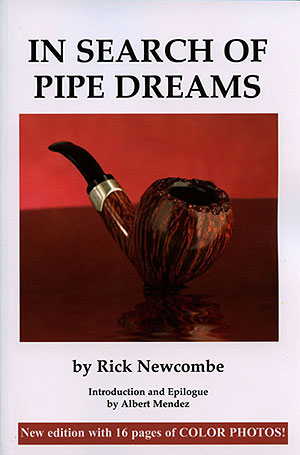 Dreams, passion, trying to reach that state of nirvana that only us pipe smokers know about … that is the point of Rick Newcombe’s book, which was first published in 2003 and was just recently reissued with 16 pages of beautiful color photographs. It is also one of the few pipe books available on Kindle.

If you enjoy your pipes, you will enjoy this book. It is a revelation, especially because Mr. Newcombe was one of the first connoisseurs to champion great Danish pipe makers who include Sixten, Lars and Nanna Ivarsson, Jess Chonowitsch, Bo Nordh and S. Bang.

Now, I can imagine that some people might be thinking, "this book is mainly about high grades" that I can’t afford, so why should I read it? 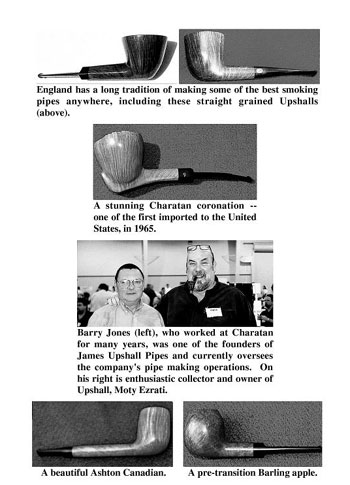 I can think of a couple of reasons. One is that he brings these masters to life in a very readable style, and it is obvious that he is close to them. You feel like you are sitting in a room with Bo Nordh watching while the two of them have a conversation. Another reason is that he devotes many chapters to much less expensive pipes, such as used pipes for less than $50, old Bertram pipes, Paul Perri pipes and others.

This book includes a great deal of information and advice to bring your smoking pleasure to a higher level, even if you smoke lower priced pipes. I loved the chapters on how to keep your pipes clean and on various methods for breaking in a new pipe.

He also advocates opening the draft hole on pipes that are too tight, which has become a controversial topic, but it is worth studying to see what it’s all about.

In addition to high grade Danish pipes, the book includes a chapter on Castello pipes and profiles of Paolo Becker, Wolfgang Becker, Karl Heinz Joura and the late Rainer Barbi. In the newest edition, there are some beautiful color photos of their pipes and also of pipes by Jeff Gracik, Todd Johnson and Jody Davis.

I am writing this review mainly with young people in mind. You should know that I am 30 years old and live in Belgium. I have been to the Chicago Pipe Show for the past three years, and it was there that I got to know Rick Newcombe. He is very approachable, and his enthusiasm for pipes is contagious. You can tell that he appreciates everyone’s choice of pipes, and he is not a snob at all.

I have a friend in Belgium who is in his 70s and has been a pipe smoker for more than five decades. He read the book too and made an interesting observation. "Most pipe books state opinions as fact," he said, "while the author of this one is clear to say what his opinion is, but to add that it is OK to have a different opinion. That is very refreshing!"

My own way of putting it is that he avoids claiming to have THE ONE AND ONLY GOOD ADVICE when it comes to his personal opinions.

There is so much good information in this book, and what’s fun is that it is so easy to read, and read again…

Even before I met Rick Newcombe, I felt like I knew him because he writes in such a conversational style. Although each chapter is a like a magazine article in and of itself (and many of the chapters were previously-published magazine articles), I kept wanting to turn the pages because it was so interesting and I kept learning new things. 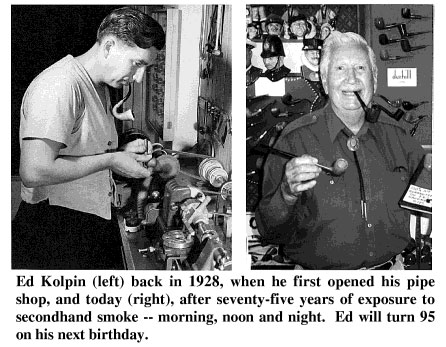 Maybe this book will make you dream about joining the world of high grade pipes, as it did for me. I became obsessed with trying a legendary Ivarsson pipe as a result of reading "In Search of Pipe Dreams," so I made this my mission.

Subsequently, I managed to acquire a Nanna Ivarsson pipe — and now I know what Rick was talking about! This is truly a dream that became reality! I just studied and looked at the pipe without smoking it for half an hour and it as just magical.

But even if expensive pipes are not for you, the fact that this book is an ode to pipe smoking and pipe collecting will stimulate you to go deeper into the hobby and make it much more enjoyable.

As far as I could tell, there is only one factual mistake in the book, so I asked Rick about it, and he said he is truly embarrassed. Of all people, he got the name of the editor and publisher of this online magazine mixed up! Instead of Kevin Godbee, the caption identifies him as "Brian" Godbee. Kevin is pictured next to Brian Levine, and Rick said he simply wrote Brian twice, and his editor did not catch it because he did not know either Kevin or Brian, so he just assumed they were both named Brian!

A particular point Mr. Newcombe mentions is moderate pipe smoking. For many of us, that is not always so easy to practice, but he offers interesting suggestions for making it possible. Of course, it’s fun to have those days of smoking one pipe after another from early morning to late night, but in general I think moderate pipe smoking can also give more pleasure and intense enjoyment for a particular smoke.

It is not surprising that this book has been translated into German and Chinese, or that the English language version is now in its sixth printing. For pipe books, that is clearly a bestseller!

Today, we live in world that is inter-connected, so that if two pipe smokers live thousands of kilometers apart, they can still be friends because of the internet and international pipe shows. This book captures that spirit of friendship among pipe smokers and pipe collectors, and I highly recommend that you read the newest edition in print … or read an earlier edition on Kindle. Either way, I predict that you’ll be thanking me.

Click Here to View In Search of Pipe Dreams on Amazon 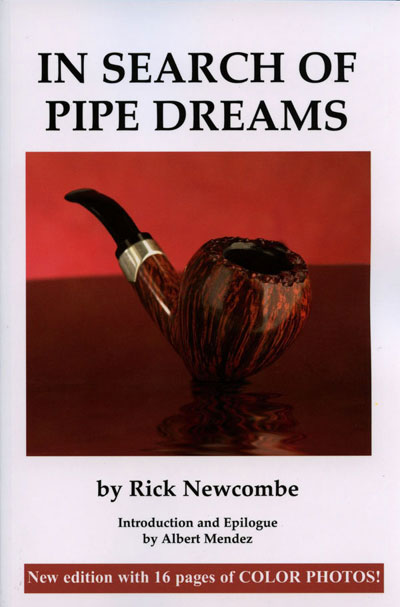