Lighting Up Your Pipe 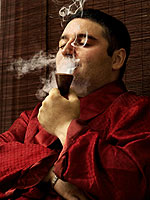 Both my father and my grandfather smoked a pipe and they made it look so easy. Tobacco in, strike the match, apply the flame to the tobacco, a couple of quick puffs and they were done.

Even when he was almost blind my grandfather could still fill the bowl and get it lit and be puffing away in no time at all. So I figured that it was easy and if they could do it then I could certainly do it too … I mean, they were old guys so it couldn’t be all that hard … could it?


Well didn’t I learn the hard way and it was a long time before I ever lived down that first attempt to light my pipe. The second through tenth light-ups weren’t much better either. These days I have no trouble … it just comes naturally … but back then … well let’s just say I learned a thing or two about old guys and wisdom.

If you’re just starting out and wondering what the trick is to getting your pipe lit … and keeping it burning … I can now tell you that there is no trick. Instead there’s a fairly simple procedure to follow that, once you’ve mastered it, will allow you to really enjoying a quiet smoke and instead of wondering if you’re pipe has gone out you’ll be able to contemplate all the good things in life.

Take enough tobacco out of whatever the container is that you use and ensure that it’s not too moist. These days some pipe smokers suggest that you use a napkin to hold the tobacco but they weren’t invented back when Dad and Pops were smoking … they just put the tobacco in the palm of their hand and that’s what I tend to do – if you’re sensitive new age guy then I guess a napkin is fine but there’s something natural about the feel of that tobacco against my skin that I don’t want to miss out on. 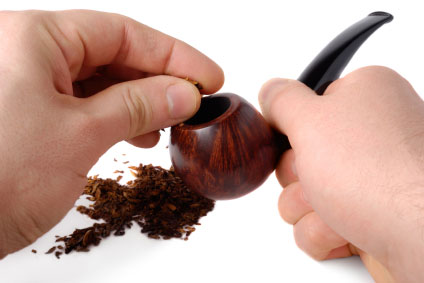 When you’re taking the tobacco out of the pouch or tin make sure that the strands are teased out and not clumped together. Loosely fill the bowl of your pipe and only then do you gently tamp the tobacco down. Some use special tools and some of use the tools that God gave us.

Don’t compact the tobacco till it’s a tight wad in the bowl … instead press it down just enough so that it there is some give in it. If you originally filled the bowl, after the tamping process your bowl will be perhaps half to 75 per cent full and definitely not so compacted that you can’t easily draw air through the bowl.

If you have over-compacted just dump the contents out into the napkin or the palm of your hand and start all over again.

This step is a two-stage process and so it’s going to take two matches. One of my son’s thinks I’ve lost my touch because I can’t get it lit with just one match … but he’ll learn one day.

The first light is done simply to char the tobacco and get rid of any remaining moisture. Apply the flame to the tobacco in a gentle circular motion while taking some short puffs. You will notice that some tobacco strands will spring up but that’s ok.

Once the match is out push those strands down until they’re level with the top of the pipe … but make sure you don’t over-compress the tobacco in the bowl. Then it’s time to get real and get the pipe lit.

Again, light a match and apply the flame to the tobacco that’s in the bowl of the pipe. Again use short puffs and a circular movement with the match. If the tobacco really is dry then nothing will pop up above the rim of the pipe and it’s time to kick back, enjoy the taste and the aroma and contemplate the good life. 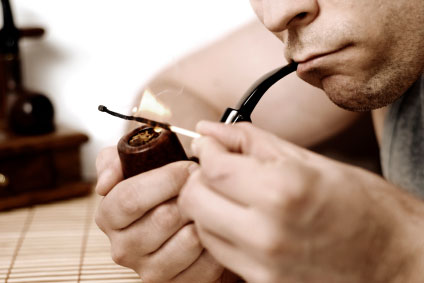 The art of smoking your pipe

You don’t want the smoke that comes up the stem and enters your mouth to be hot. If it is then you’re to smoking too fast. Those short puffs were right to get the fire started but to keep your pipe burning without blistering your mouth you need to change your rhythm and move from quick short puffs to long slow draws.

Don’t panic if your pipe does start to go out … that’s about par for the course even for an experienced smoker. Simply relight it and go on enjoy the taste and contemplating the good life that you can have with your pipe. Sometimes the interior of the stem can get a little wet and if it does all you have to do is take a pipe cleaner and slip it down the stem, leave it for a moment or two and then withdraw it and go on smoking.

When you’ve finished your smoke let your pipe cool down before you start the cleaning process. If you start pulling your pipe apart while it is still warm you will damage it and it will soon need replacing. A well-cared for pipe can last for years so don’t rush into cleaning it before it’s ready.