In Part 1 of our interview, Greg talked a little bit about how he got started blending tobacco, how he goes about developing new blends, a new blend that will be released soon, and many other things.

Here is Part 2 and the conclusion of our interview with Greg Pease.

PM: What are some of the changes that you have seen in the pipe and pipe tobacco industry over the years?

GLP: I’ve been smoking a pipe for about 30 years, now. Some blends and blending houses have changed dramatically. Companies have merged, or outsourced their brands to others, sometimes with less than optimal results. There’s been a drastic decline in pipe tobacco consumption over the years, and it just hasn’t been cost effective for a lot of the old blenders to keep their doors open. And, far too many retail tobacconists have shuttered. The days of walking into a great brick and mortar shop in any major city, talking pipes and tobaccos with knowledgeable staff seem to be behind us. There are still some fantastic shops, but they are fewer and farther between.

On the up-side, there’s been an amazing proliferation of on-line sources for pipes, tobaccos and accessories; so the modern pipe smoker still has access to great variety. Access to a wide selection of tobaccos and pipes is better than ever, and trade with European sellers has never been easier. But, even that’s changing with anti-tobacco regulations mucking up the works. Some UK sellers will no longer supply their US customers because of credit card restrictions.

So, on the down-side, with the regulatory terrain becoming more difficult to navigate – and things don’t seem to be working in our favor – I’m afraid it’s not going to get any easier for tobacco sellers to keep going. So it’s essential that we do whatever we can to support the businesses that are struggling to continue providing excellent service.

PM: We have heard and have seen for ourselves that a lot of younger people are starting to get into pipes. Have you seen a resurgence in pipes and pipe smoking?

GLP: It does appear that there’s something of a renaissance of pipe smoking. It’s encouraging.

A lot of younger pipesters are coming into the ranks, seeking ways to find some solace and tranquility in our too often fractious, modern lives. Albert Einstein once said, “I believe that pipe smoking contributes to a somewhat calm and objective judgment in all human affairs.” If there was ever a time in our history when we needed that, it’s now.

Too, I think people are looking for ways to enjoy tobacco in a more expressive way. Cigars are expensive, cigarettes are too quick, and both are disposable. A pipe says something about the pipe smoker. It’s permanent. It’s a statement of individuality, and in a sense, is something of a quiet rebellion against the relentless onslaught of “progress.” It harkens back to simpler times.

MORE READING  Where Will Pipes Be In 100 Years?

If more of our leaders were pipe smokers, I think the world might be in a better position overall.

PM: You and Luca di Piazza [from NeatPipes] collaborated and created Pease/di Piazza Design and last year introduced the new, Limited Edition Rubens Rhodesians pipes. They were a great success. Are you two working on a new project and will there be any new Pease/di Piazza pipes coming out in the near future?

GLP: Working with Luca and Radice has been a blast, and we do have plans to continue this series. The second pipe will be announced on 19th April, and Luca and I have been working on additional designs, as well as some other projects that will be announced soon. I’ve always wanted to do something like this, and It’s been a wonderful collaboration. Luca and I have overlapping aesthetic sensibilities, and though we don’t always agree in the early phases of a design, we seem to be able to reach a synergistic result quite easily. It’s really a lot of fun! And having Radice’s experience behind us, having them there to realize our vision is fantastic. They’re making really great pipes for us.

I’ve also done some designs for other makers. It’s always exciting to see one of my sketches appear in 3D at the hands of a master. I learned a long time ago that I don’t have the patience to actually make pipes, so it’s great for me to have some of my ideas realized by someone who actually knows what he’s doing with the wood.

PM: On to something of a more serious note. What are your thoughts on all of the anti-tobacco legislation and how quickly they have been moving their agenda over the last year or so?

GLP: It’s very disturbing. With all the more serious issues that government’s face that they seem to find so much time and spend so much effort meddling in the private affairs of the people is despicable. Tobacco, in all its forms, has been targeted as an easy way to control behavior, violate liberty and siphon more cash out of our pockets. I really wish they’d put as much effort into addressing some of the real problems the world is facing.

PM: We at PipesMagazine try to keep an eye on all of the anti-tobacco activities, but with so much of it going on lately, it can get overwhelming. We have been trying to get all smokers and tobacco users to unite and join in a collective effort to fight against all of these absurd anti-tobacco agendas and laws, but we have met with some resistance from some pipe smokers. It will, and does, go much deeper than just tobacco rights. What are some of your opinions on the subject that we all have to stick together?

GLP: Unfortunately, some pipe smokers have been complacent regarding the constant attack on cigarettes and the cigarette industry, and it’s been difficult to get our ranks to rally behind the efforts to preserve our pastime. The fact is, we rely on the cigarette industry. The big tobacco companies make it possible for pipe tobacco producers to get the leaf necessary to do what we do. If Big Tobacco sinks, we’ll be forced to go down with them.

I wrote more on this in the Chronicles in an article entitled, “Us vs. Them.”

PM: Now that the PACT Act has passed and been signed, we at PipesMagazine are even more concerned with H.R. 4439, The Tobacco Tax Parity Act of 2010. This will have even more drastic consequences by going deeper than just higher taxes. If H.R. 4439 ever becomes law, it will consider pipe tobacco the same as Roll Your Own cigarette tobacco. That will mean that it will no longer be able to be shipped by mail. What are your thoughts on this?

GLP: H.R. 4439 is about revenue and control. Some of the RYO producers changed their labeling in order to slip through a loophole in the law, and that’s what H.R. 4439 is trying to “fix.” Unfortunately, the original SCHIP bill was supported by Big Tobacco, who sought to eliminate the advantageous excise tax situation with the RYO producers. At the new rate, RYO is just as expensive as ready-made cigarettes. By re-labeling their product as pipe tobacco, they were able to sell at the lower FET rate. Who can blame them?

Some rather unfortunate media attention brought this back to the legislators quite quickly, and H.R. 4439 was the result. If it passes, pipe tobacco will be taxed the same as RYO, and that’s going to hurt our whole industry. The matter of shipping through the mail and the PACT bill is another issue. We’ll have to be quite vigilant in our letter writing if there’s going to be any hope of this not having a serious impact on all tobacco, rather than just cigarettes as it is now.

PM: Let’s get back to things that are more enjoyable to talk about. I see that you are now expanding and are starting to get into the food industry. Could you tell us a little bit about it?

GLP: A little over a year ago, Daniel, my partner in Flavorevolutions, and I started talking this thing out, and it just sort of created itself. Daniel’s also a pipe smoker, which is how we met. We’ve each spent almost our whole lives loving food, loving cooking, loving feeding people. We’ve each spent time in big kitchens; he’s run some great restaurants, and has spent a lot of time in commercial food development. It’s a wonderfully synergistic partnership.

There’s little in life that’s more exciting than sharing great food with others. Philosophically, it’s not dissimilar to what I’m doing with the pipe tobaccos. It’s all about flavor, aroma, and the enjoyment that comes from sharing the experiences. We’re a little behind in getting products out. Everything is in place, really, except for funding. Isn’t that always the case?

PM: Your website, Flavorevolutions.com, looks very interesting and informative. Will you just be sticking to creating products like spices, condiments, etc?

GLP: We’ve got a lot of really interesting stuff in the works. Sauces, spices, condiments, and some things I can’t really talk about yet. We’re very enthusiastic about the concepts. We want to bring great flavors, and great cooking to people in a way that’s community oriented. The whole idea behind Flavorevolutions is to help people get involved with cooking and eating deliciously, and exploring the world of food in perhaps some new ways.

Of course, we want people buying our products, but we want Flavorevolutions to be something more than just a brand on a shelf. It’s still in the early stages, but it’s really exciting for us!

PM: Will you be in Chicago for the 2010 Chicago Pipe Show this 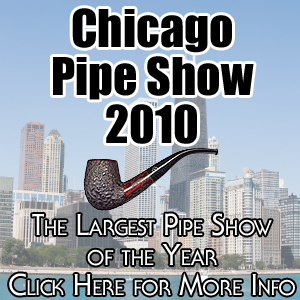 GLP: I’m not sure I’ll make it to Chicago this year, but I am going to try to hit some of the other shows. It’s been a while since I was at the CORPS and NASPC shows, and I’d love to make at least one of those.

PM: What are some of your favorite things about pipe shows?

GLP: For me, the shows are all about the fellowship. Seeing old friends, making new ones, getting a chance to talk to the new pipe makers who are emerging, and see what the old-timers are up to. And, of course, talking about tobaccos never gets boring! Shows are a wonderful, if somewhat exhausting, non-stop party of pipes, tobaccos and those who love them!

PM: Is there anything else that you would like or say to our readers?

GLP: Of course, I’d love to thank them for their years of support. I often wake up wondering just what the hell I’m doing in this crazy business, but then I’ll get a wonderful note from someone who has just discovered one of my blends, and it brings it all back home for me. It’s the greatest joy I can imagine creating a product that brings joy and pleasure to others, and without the support of so many pipesters, it would never have been possible. It’s been a little over ten years, and it’s flown by. I’m looking forward to
another decade. And another. We’ll see what happens after that.