Who Has The Fewest Pipes?

I have (er um) dozens of pipes, so I am intrigued by Forums members who have only a few. Some have claimed five or six. For all of us Pipe Acquisition Disorder sufferers, those of few pipes, how many do you have? Who has the fewest? How long have you been in this holding pattern? And what are your secrets to maintaining with just a few?
Old joke: A young employee of a crotchety old multi-millionaire trying to shine up the boss eagerly asked him, "And Sir, where do you get your ties?" And the old man snarled and snapped, "I already have my ties."

Nobody's going to come forward. It would be like admitting that you have a 2" willie. 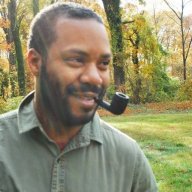 I have eleven pipes and a big pipe...cabinet.

sablebrush, I guess so. I thought I'd turn up a proud Scotsman or someone else into material austerity. People have mentioned having only a few pipes in passing, but apparently they don't want to be associated with it. My dad chain smoked Granger and usually owned only one functioning pipe at a time. He used to pack for a two week vacation in a valise suitable for taking a few business papers to the office. But he was a kid of the Great Depression and a sort of survivalist before his time, sleeping all summer in a pup tent outside his family's summer farmhouse which had no running water or electricity (big pioneer fantasy with them). Okay, oh thee of few pipes. Last chance to share your unique situation.

I'd be surprised to find out that any of our regular members has but a handful of pipes. Now of course there're the "new pipers"- who just bought their first pipe, but I don't think that counts. Entrants must have been piping for six months to a year. Also, there should be a formula like "# of pipes divided by years piping"- or something. For example- I have 14 pipes I consider "smokeable", and I've been piping about four years, which puts me at 3.5 pipes/year. I've bought more than fourteen pipes- but they are either estate pipes that require heavy rehabilitation- beyond my skill level, and I have not the necessary tools, or they are basket pipes bought on a whim- which turned out to be not to my liking- at all. Or, they're new Grabow's, which have a Gorilla's thumb for a button.
I am a testament to "buy what you can afford". For if I had saved the dollars I spent on pipes that would end up going to Shaintiques for the free pipe project (eventually), I would have a respectable rotation of excellent pipes.

I actually have three pipes

A Peterson, a Vauen and a Czech churchwarden. Although I am currently scoping out an auction so tomorrow I might have 4. Still quite few but I'm only in this for fun mind you. I don't crave the vitamin N I just really like smoking a pipe :

I have less than others here.

Guys, be discrete. Wives may be monitoring this thread.

alexnorth is the leader, with samandan running a distant second with his empty cabinet at the ready. I agree, newbies with a few pipes are just getting off the line, so that doesn't really count. For many years I had about six pipes, smoking on and off, so this isn't uncharted territory, but I sure lost that distinction. 'banjo, I know you have fewer than some, but not a whole crowd. and brad has a fifty dollar limit. For those who'd like to buy a bridge in Brooklyn.

No I have fewer than you Fish, Peck :rofl: I hope your wife doesn't check the false wall in your Barn, just saying.

No I have fewer than you Fish, Peck [:rofl:] I hope your wife doesn't check the false wall in your Barn, just saying.
Click to expand...

Wonder what Peck's kids charge him to keep quiet about the barn...

Doesn't Peck have one of those swiveling bookcases that hides the entrance to his secret pipe room?

My father had the minimum number of pipes. He had one. When he wore that one out, he would buy another. I on the other hand have about twenty right now.

I have less than some, but more than others. Pretty sure, however, that I do not qualify for the lowest number :puffpipe: