The Newest Part Of My Brigham Collection. (Pic Heavy)

Perhaps some of you know that I am fan and collector of Brigham Pipes and Memorabilia. I a have certain fondness for Brigham. The old factory was down the street from where I grew up in Toronto and finding the old "Canadian Made" estates is always a great treasure hunt.
This past month my Dad gave me a early Birthday Present. Now when he presented me with this gift, i will say I am not one to ever swear in front of my parents, but when I opened the case i let out a rare "Holy Fuck". It was classic.
What he gave me was a ultra-rare 9-dot custom case Brigham pipe hand carved with a Inuit motive.
Turns out the same night was the October "Lakeshore Smokestacks" meeting so we were able to chat about it. We came up with some ideas, but none for sure. So I contacted Penelope at Brigham whom I have had the pleasure to meet a couple times at various meetings, and she is always interested and willing to help in this matter.
So I sent along pics and just last night I got a reply, as seen below. Pretty wild history and score in my books..
From Penelope:

Hi Chris,
I spoke with Dan and here is what he was able to find out with regards to the pic of the pipe that you sent us. He remembers seeing it about 10-15 years ago along with one that was more intricately carved with dogs pulling a sled. Both these pipes are one of a kind.
This according to Mr. More:
Mr. B (Herb Brigham) was a very curious gentlemen. Always exploring new techniques and methods or just simply questioning the status quo as he was fond of saying, “just for fun”. He remained curious until the day he passed. As a result of Mr. B’s curiosity, he traveled extensively bringing back with him curios and more “just for fun” notions. In the late 1960’s and 1970’s the Canadian north was made accessible to the lay traveler. The Polar Bear Express from Cochrane to Moosonee helped with opening the north when it was launched in 1964. It was also around this time that James Houston, with backing from the Federal government, started to bring Inuit carvings south. Although so common now there was a time when these carvings did not exist south of 60th parallel. It would be the combining of these events that culminated into the pipe you are inquiring about.
Unfortunately, when these pipes were found Mr. B’s memory was not what is used to be and he recollected “bringing these back from a trip north”. Other bits of the story have lead me to think instead, that he took a couple of pieces of briar block with him and left them to be carved. Unfortunately, without a signature it is impossible to know who the carver was. The 9 Dot pinning was applied to identify the pipes as extraordinary and outside the norm. To think that the pinning was achieved without the aid of a guide or template is a testament to the skills of our pipe makers at that time. I have never seen another case like the case with this pipe.
Now you have a story to go along with your, literally, one of a kind find.
Enjoy and we will chat soon.
Cheers,
Penelope
Click to expand... 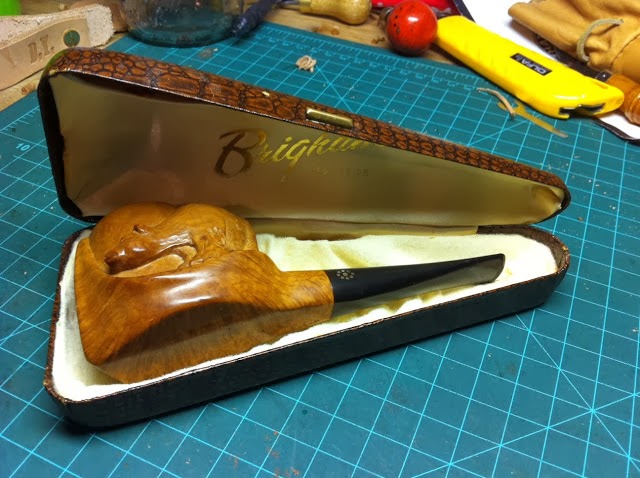 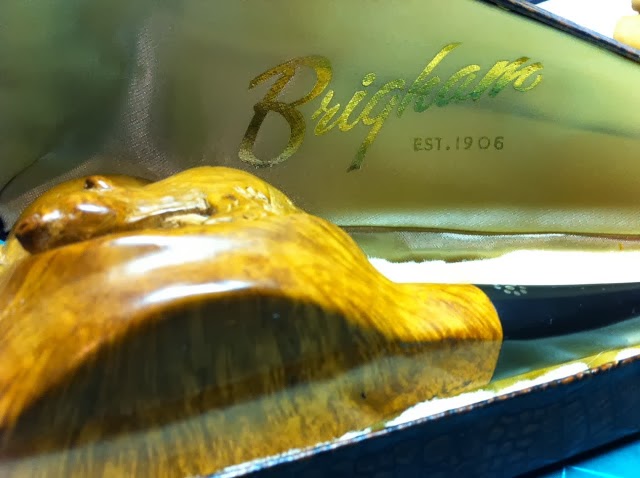 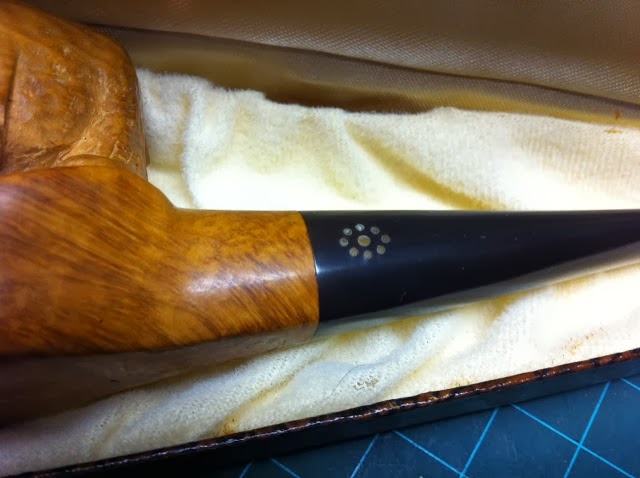 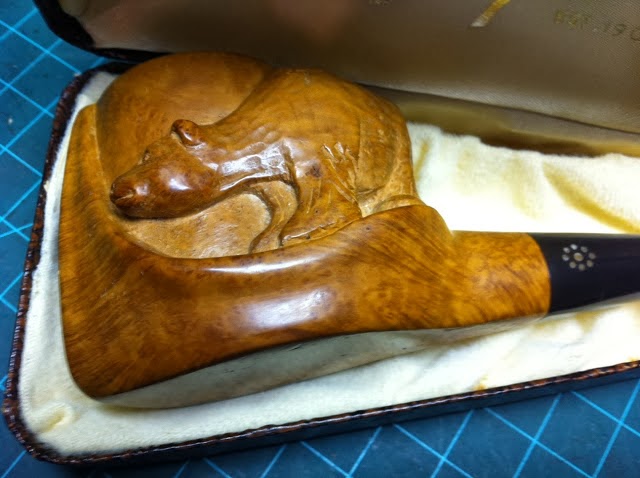 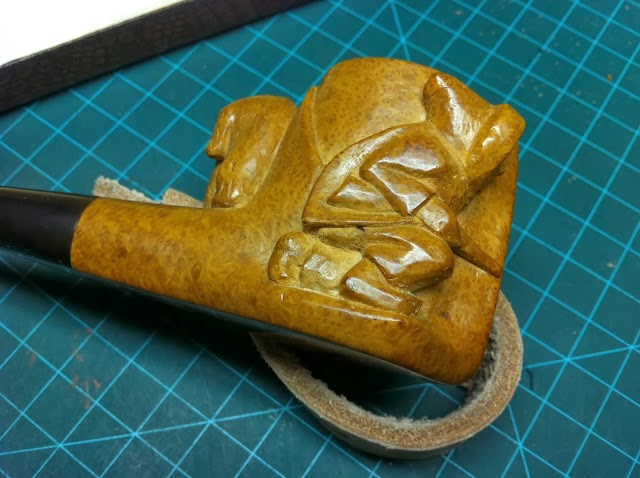 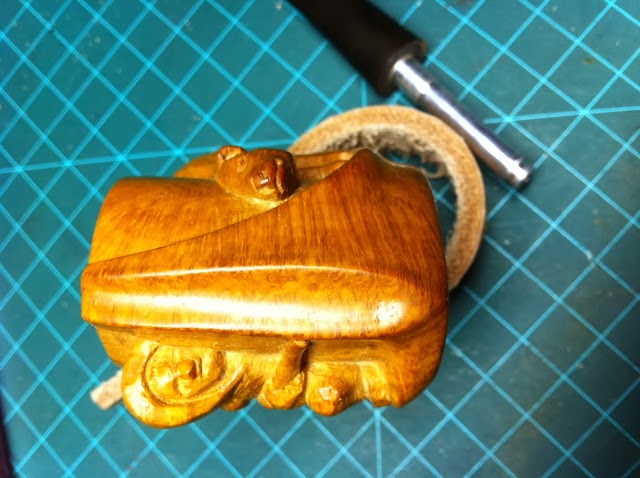 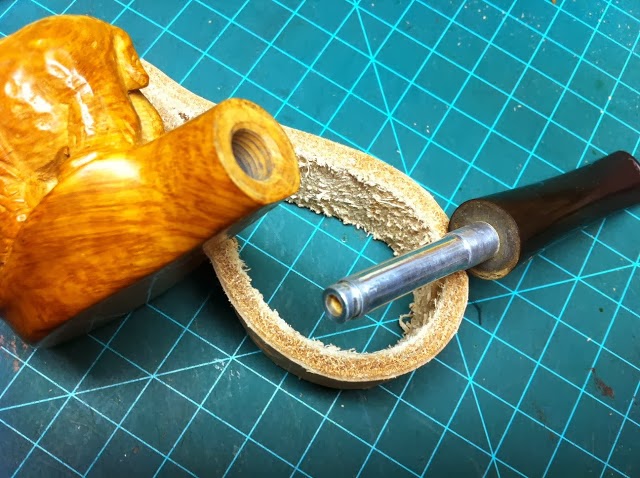 Wow that is awesome! Looks like a nice piece of briar too, nice bottom grain. Thanks for the story, that is super cool. So where did your dad find it?

An amazing one off. Priceless. You are a fortunate owner. Be sure to document the provenance you have acquired.
Interesting stinger. It appears altering the smoking path is a long held tradition.

Thanks for sharing the story of that pipe, Damnyak. I'm glad Penelope was able to chase that down for you.
@jkenp - Brigham has been using a rock maple filter for over 50 years, if I'm reading their website correctly, it looks like they started experimenting with different materials to solve for tongue bite in the 30s. The filter has an aluminum cap and sits in an aluminum sleeve... I believe that on some pipes the sleeve is now delrin. Here is a link to Brigham's page on the filter - http://www.brighampipes.com/The%20Brigham%20Pipe%20Filter.htm
Damnyak, we knew it was a special pipe when we saw it, but a one-of-a-kind... that's a helluva find, mate. SO happy for you.
-- Pat

What an amazing piece of art! Congratulations on a tremendous find and beautiful pipe!

Such a great story Chris! The pictures do not do it justice, its an absolutely gorgeous pipe that had the guys in awe when you pulled it out. Your Dad is the man when it comes to finding unique and rare pipes!

That is one GREAT pipe. I to love the Brighams! 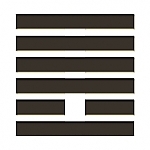 What a great pipe, congrats!
It's wonderful that you got to know some of the backstory on the pipe.
Jari

I want to see that one in person next time we meet!

Amazing looking pipe, and a classic Brigham for your collection...what more can a smoker ask?

Amazing. If we had a National Gallery of Pipes that would be a star attraction. Has it been smoked? Regardless, think that one's for display now, not so much for puffing! Glad Brigham does seem to have a sense of its history. I'm sad they're not making their pipes here anymore.

Very cool story Thanks for sharing. I hope you treasure that pipe, not only as a one of a kind work of art, but as a great gift from your father. I'm willing to bet you will. Enjoy 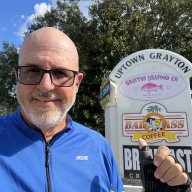 @rockymtnsmoker....It is Unsmoked..
@shutterbug....will bring it for sure.
By reading the story from Penelope, I question whether it was from Herb Brigham's personal collection, I have started to see if I can find any back history if there was an Estate Auction after he passed on Sept 10, 2010.