The Holy Grail of all English Pipes -- A Rarity among Rarities

A prime example of a pre-war Dunhill LC in fine condition. (Very few were ever made, and because they are fragile many of those few didn't survive or are damaged.)
To save typing---and because John Loring forgot more about Dunhills in an average week than I have learned in 40 years---here is his page devoted to this particular model of pipe:
http://loringpage.com/PipeArticles/The%20Atypical%20LC.htm
It was not damaged when it was sent to me, just buried under 77 years of built up and impacted smoking grime and stem oxidation. (In a freak bit of luck, the button was not significantly chewed. Meaning it was probably a one-owner pipe.) That's a spectacular pipe, an iconic Dunhill!
Here's a fun page on pipephil where the classic LC shape is replicated by several top artisan carvers:
LC Replicas
This shape was originally developed by Genod, IRRC.

This shape was originally developed by Genod, IRRC.
Click to expand...

That's interesting. There was an older French pipe (don't recall the maker now) on ebay the other day and I it was shaped just like the LC.

:clap:
Old blasts like that are time consuming to properly restore and I'm sure that 77 years of built up and impacted smoking grime and stem oxidation made it quite the task,

the restoration is beautiful.
And,

what a pipe!
A stunning Grail!
A perfect example of a swan neck,

A very elegant pipe. A beautifulb thing to behold. 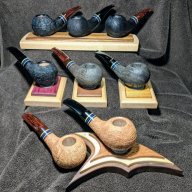 That's interesting. There was an older French pipe (don't recall the maker now) on ebay the other day and I it was shaped just like the LC.
Click to expand...

A lot of the classical English shapes are actually French in origin. The French brought briar pipes to England in the mid 1850's. Genod, Chacom, BC, Comoy, Chapuis and others pretty much created the vocabulary.
Loring mentions the numerous examples with spliced shanks. One of the stories I've come across states that, while the French had developed a method for drilling a curved airway, allowing for the delicate and graceful "swan's neck", Dunhill didn't have that technology and therefore spliced the shank in order to drill the airway in angled segments. I don't know that it's true, but it's a heck of a great story.

Interesting about the fragility of these pipes. Other than it being a little rangy and curvaceous for its size, I would think it would have the usual degree of durability, but I guess not. It has a handsome stately look, and an excellent finish. It does look like new. Good to have it back in mint condition.

Interesting about the fragility of these pipes. Other than it being a little rangy and curvaceous for its size, I would think it would have the usual degree of durability, but I guess not.
Click to expand...

was quite a technical feat and a very complex shape to produce.
The Loring page that George linked is most excellent and quite definitive.
But see also:
This article, where Erwin Van Hove talks about the French connection,

(you'll have to use google translate unless you read French)...

Here's the perfect sweater to wear while smoking the classic Dunhill Large Curved:

Nice clean up job George. That is a very elegant pipe. :

Thanks for posting the pics. Wonderful to see.

Google translate continues to provide much merriment and some real howlers.
After a fascinating discussion of the etiquette involved in commissioning pipes, the translation of Mr Van Howe's prose provides the following:
In his response to David Enrique's request for a critique of Enrique's first attempt at reproducing the LC shape, Mr Van Howe offers up the following (translated) observation: "And as thy rod is more massive, the pipe also is coarser than on the LC."

To which David (translated) responds: "You're right when you notice that my rod is slightly more massive."
Mr. Van Howe decides to purchase the pipe though it doesn't quite meet his metrics and encourages Enrique to try again.
David Enrique sends Mr Van Howe a new sketch, based on a 1934 model 128. Mr Van Howe responds (translated): "I think your drawing is closer to the archetypal LC as your first blowjob." Who am I to argue with that?
Mr Enrique replies (translated): "I'll still try to see if I can make some corrections, knowing that the pipe will certainly still significantly different from the sketches, and try to narrow down the shaft slightly and make it a round ass, since you love with slim sizes a big ass. "
Clearly they are on the same page.
Thank you Google Translate!

I tried to write a fan letter to Mogen Johansen who carves his Johs pipe in Denmark and Google translate it into Danish. It was a real loser. Luckily, it was misdirected and came back to me so it could be promptly recycled. Mogen doesn't need praise like that.

So much for "intelligent machines"...
George, a great looking classic! 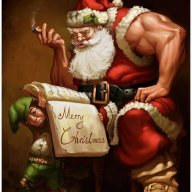 The LC is truly a Holy Grail shape, that one is magnificent. I'll have to settle for my slightly less elegant 120 shape. If I squint my eyes...
On a related not, recently someone contacted me about selling a 1950 Dunhill LCC. I assumed the LCC was a mis-stamp but in communication with Rich Esserman, I learned that the LCC was an even more limited edition shape than the LC. I gave the owner some commisson/selling recommendations and I'm waiting to see which direction he takes. He gave me permission to do a thread about the pipe and I'm waiting to see the restoration and selling photos. So, stay tuned!

Wow! If in 1938 Chamberlain had taken that to Munich and told Hitler he could have the Sudetenland or the LC, then WWII might have been avoided.
Beautiful restoration on that pipe!