Well, I am a percussionist. My focus is Jazz Vibraphone and Drum Kit. I also hold a degree in music education. Although I am applying for graduate school in jazz studies for next year, I needed to work this year between undergrad and grad school. Fate works out that my sister, another music teacher, is about to have a child and is taking the rest of the year for maternity leave....in walks me. And the job pays 210% what I was getting the last few months at the liquor store I worked at after moving home from school. Unfortunately, I'm not a teacher at heart. I'm a musician who likes to perform and share my music. I would like to get my phd after grad school and teach at a university, where the students are also investing their lives in music, a setting I can actually enjoy. But alas, here I sit on lunch for day one at this elementary school, thinking about my time ahead for the next seven months. And I must say, although at an elementary school with such small children, this shouldn't be in place and therefore wouldn't immediately help me, oh I wish I wish that one day as a college professor of percussion I can sit and teach while smoking a pipe!!!!

music is a really tough business, so much politics.

I started teaching guitar 30 years ago, have a few students at present. I wrote a few books on the modes, primarily for jazz guitarists, or at least guitarists who can already play some. They can be found on one of my websites.
Have no teaching degree, did mostly classical studies. I don't gig much these days. loading out of a place at 3am in january isn't something I miss. Neither is haggling with club owners.

OK, I have a lot of stupid questions...
You say you're "not a teacher at heart", yet you want to teach at a university?
Rather than a masters and PhD in jazz, why not just gig? I doubt Lionel Hampton ever read a book about jazz. He just wrote it.
I'm not being judgmental (I am neither a musician nor an educator, so what do I know?) But I used to work in the student loan business and I know how far in debt people can get, especially when pursuing graduate degrees.
Whatever you do, just stick to your plan and good luck. 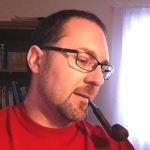 They say getting a job doing something you love is something everyone should aspire to. What's the word on getting a job doing almost something that you love? Musician teaching music: on the plus side, you get to practice the fundamentals over and over. On the minus side, you might snap when Tone Deaf Johnny hits the 82nd false note of the day...
Then there's me: a programmer who builds business systems. On the plus side: food on the table. On the minus side, I no longer have the will to create awesome things in my spare time just because it's cool.
Just sayin'. These days, it's hard to say no to a decent paycheck.
Simon

i wouldn't wish music as a career choice on anyone. in the usa musicians are treated as worse than beggars. there are some who do it because they just can't bring themselves not to, and some who just can't do anything else. so teaching is a passible way to stay in it. it's no longer my sole source of income; all that stopped many years ago. i believe if one treats what they do as art, no matter what it is, then even sweeping floors can be a joy.

I find this a remarkably interesting thread. From the outset, I must point out that I do not consider myself as a Teacher. I have taught a few people, but that has been on a one to one basis and normally has just been to help someone who might be having a problem with a particular problem. However, when I had to spend a year in a Wheelchair, I found I had gained a few pupils. It was an interesting distraction at first, but by the time I was 6 months into the inforced regime, I was finding that I was actually beginning to dread "Lesson Days". Not because of the pupils, but the amount of work that I was doing before hand in preparation.
It is strange that coming from the background as a Session Musician, that I was struggling with arranging these informal lessons, but struggling I was! It was at the 6 month point that I had my epiphany moment and reversed my tactics and taught my pupils how to read music. From that moment, everything became considerably more fun, not only for me, but also the guys.
The other thing was that the guys and gals were coming to a lesson with a Score that they wanted to learn and it was the sheer diversity of music that fascinated me. The Guy who will always stand out in my memory was a self proclaimed "Hard Rocker". If we weren't sorting out Cradle of Filth material, then it wasn't worth doing. So isn't it interesting that we were now sitting down and working our way through pieces such as "St James Infirmary Blues"

"Classical Gas", "Angie" and many more finger style pieces?
In short, I have nothing but the ultimate respect for you guys who teach. It really wouldn't be my idea of fun.
The other irony was that I have always maintained that come the day that I regarded a Guitar as a Tool, that would be the day that I quit. Well it had never happened until the time when I was teaching. Interesting thought eh? :D

I taught guitar from high school through college. Worked a 33 year professional career in sales and retired 4 years ago. I started teaching guitar again at the local community center and now have 9 students. Mostly young kids 9-14 years old. I guess the difference this time is that its not a job but an avocation. I stress that we're there to have fun and that they'll get out of it only what they put in.

I don't approach it as if any of these kids are prodigees but just kids who "think" they want to play. If anyone shows more interest in going deeper into the music then I'll take them there.

Its a gift that I share with them and remind them that their parents are making sacrifices to give them something that could last a lifetime.

Today's children are involved in so many activities that music is just one more thing on their schedules that get fir in between dance, karate, sports and what-have-you. I try to keep it simple and entertaining.