I am probably one of the biggest Star Wars fans of anyone I know and I am saddened beyong belief that our beloved Chewy has passed on. Rest in peace you loveable fuzzball. 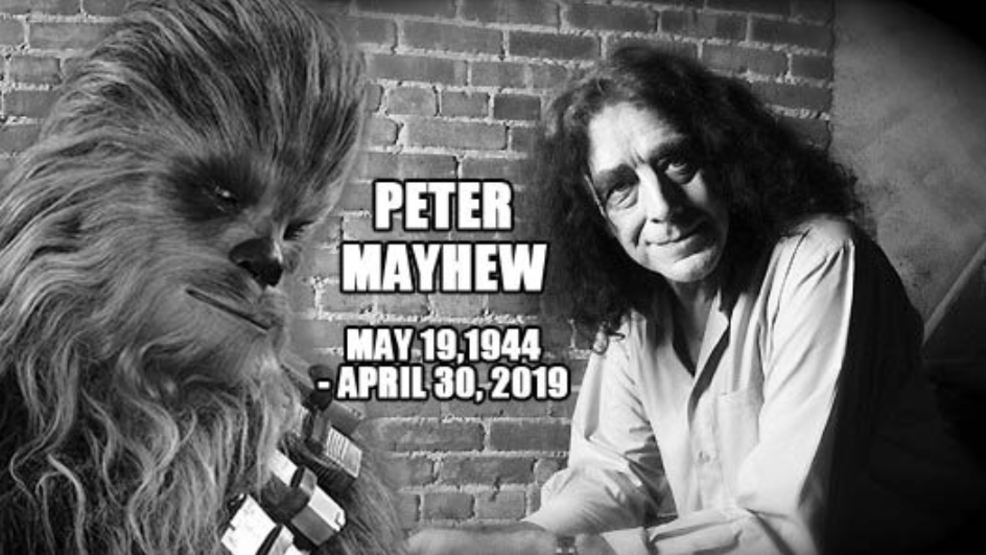 Okay, and I mean no disrespect, but they can just put another tall dude in the suit.
Now, as for the man, rest in peace.

True, they can, and have, but it's not the same to me. Maybe to others it is, but to me, Peter Mayhew WAS Chewbacca. Other actors have played the part in the latest movies and that's fine, he couldn't do it forever, but that's just how I feel about it.

I agree that I will notice too, internally. But I got over Kenny Baker/R2-D2, I will get over this. Original actors are the least of the worries concerning the Disney/Star Wars universe.
RIP Mr. Mayhew! It's going to be one looong coffin.

Original actors are the least of the worries concerning the Disney/Star Wars universe.
Click to expand...

Certainly RIP Mr. Mayhew...the original Star Wars movies undoubtedly occupy a significant place in cinematic history.
But I honestly had no idea who played Chewbacca. And I've never understood the near religious devotion to this SW "franchise".
Admittedly I'm not really a fan, although I thought the first 2 or 3 that were made were pretty good. But what really puzzles me is that there seems to be a consensus even among true fans that essentially all of the more recent installments were mostly disappointing...and yet the devotion and attachment to the whole seemingly never-ending Star Wars/industrial complex remains as intact as it ever was.
I just don't get it.

He did an incredible job for sure.

I heard this while I was still at work, and I was saddened. I've been a fan since I was three years old, when my father took me to see Star Wars (1977... before it was called A New Hope). It's the first movie I can actually remember seeing at the theater. Being only three years old at the time, the movie must have made an impression on me. One of my favorite things about the movies has always been the Han Solo/Chewbacca duo. Han was always my favorite character, but he wouldn't have been Han without Chewy beside him. The movies as a whole, wouldn't have been the same without Chewy. Thank you, Peter Mayhew for all that joy you brought to so many people with your character. Rest in peace.

Rest easy Chewy! I met Peter along with Kenny Baker (R2D2), Jeremy Bulloch (Boba Fett) and a few other cast members at a bar in a small Texas town one night. Apparently there was a nationally/ internationally popular Star Wars memorabilia shop in Bay City, Texas that held a show at the small convention center next to one of the few local hotels that had a descent bar. My buddies and I would wet our whistles at this bar pretty often and we ran into these guys one Saturday night. I was walking out of the restroom and Kenny Baker (dwarf/ little person) was trying his damndest to open the big, heavy door to the restroom as I was leaving the restroom and as I opened the door he nearly head butted me in the crotch. He was looking for his lost harmonica. Peter was following shindig him helping. After that we all had drinks and showed them a large Texas time at The Oasis! I am 6’3” and had to look up to Peter, he was a very tall man.

I was a fan, especially as a kid, which is what the movies were made for. But, his "acting?" Come on. What, waving his arms around and pointing the gun in the right direction?
Someone had done an interview with the guy who played the Night King on Game of Thrones, and they were asking him about questions about his acting and techniques, and I was thinking... He moved only once. He was a guy in heavy make up. And, by his own admission, they had to do the scene where he moved like 30 times to get it right. That to me says he was a dumbass.
There are actors, and then there are those that are merely manikins that move. Some heavily costumed characters really bring the character to life, as in what Jim Henson does or the Batmans, or even Darth Vader, and some just keep the suits from collapsing.

See you in space, Chewbaccca!

Costuming and a sense of puppetry pervades all these characters who appear in concealing costume, from Big Bird to Chewy. Like sports mascots cavorting on the field, it takes a lot of energy and a special skill to convey a character through a concealing suit, including having a sense of what a fantasy character should be like to connect to an audience. It really relates to puppetry since you have to convey this through the puppet or the costume with few of your human attributes available, but lots of posture and body language, maybe a sense of dance and clown skills. I wasn't a huge Star War fans, and when a friend or two started attributing religious meaning to the melodrama plots, I sort of tuned the whole thing out. But I do remember Chewy, and I thought Mayhew did him well. RIP.

but they can just put another tall dude in the suit.
Click to expand...

I always felt his movements conveyed a sense of who was in the suit and his abilities as an actor. Not just some tall guy filling space.
His voice was replaced by growls and computer wizardry. But he was more of a mime and had to really shine through all the hair to become Chewbacca. I think he was quite good at it.

Mayhew suffered with joint issues and had knee replacements later in life and spinal surgery as well. It was related to his height and aggravated by it as well. He was over 7 feet tall, I imagine that becomes an issue at his age.

No disrespect to the chap but donning a hairy outfit and occasionally grunting is hardly acting in the proper sense is it?
I mean, any tall chap (or chapess for that matter) could have done the very same thing no?
Just my tuppence worth.
Regards,
Jay.

Mayhew suffered with joint issues and had knee replacements later in life and spinal surgery as well. It was related to his height and aggravated by it as well. He was over 7 feet tall, I imagine that becomes an issue at his age.
Click to expand...

Yeah, he suffered from gigantism and it can place a heavy burden on the body's bones and heart. This is the primary reason in most of the newer movies, he played more of a consulting role.

I love it when someone says something like, "no disrespect, but...."
Hey, you think it's so easy and anyone can do it, give it a try yourself.

When I first saw the headlines I thought something horrible had happened to Joonas Suotamo.

Thankfully it’s just the circle of life rolling along.

Peter Mayhew saw his final day, may he rest in peace.

I love it when someone says something like, "no disrespect, but...."
Hey, you think it's so easy and anyone can do it, give it a try yourself
Click to expand...

Well, I actually did just that AND now I'm not allowed within 1,000 feet of schools. So there's that.