It's stained with nothing more than Tobacco itself!
This Pete was born as a Fermoy. I bought it just because I needed a filtered nickel-banded 80s, while Aran (which was actually what I was searching for) was nowhere to find in the stores. So I purchased a Fermoy meaning to re-finish it. Because I don't like that lacquered grayish finish on Fermoys.

I have a bottle of water-based wood stain at home. But since I have already re-finished two or three other pipes with it, I didn't want to have another one of the same color. So I decided to make something special: a tobacco-stained pipe.

I went googling for staining pipes with tobacco juice and found nothing. So I went on at my own risk with the new (and not the cheapest) pipe.
So, what I did:

1) I put 10g of Samuel Gawith's Westmoreland into 10ml of 5% ammonia and sealed it for 2 days. (I don't like Westmoreland for its blandness, I wouldn't smoke it anyway so I was happy to find it a new application).

2) I used acetone to remove lacquered varnish from the Fermoy. The lacquer went off easily but the original stain remained.

3) I sanded the original stain off the pipe with 400 grit sandpaper. To not change the geometry of the diamond shank I glued sandpaper onto cardboard strips, making thus stiff and flat sanding "files" which I used specifically for sanding the shank.

4) Then I opened my ammonia-Westmoreland black juice. What an ammoniac stench was there! Open and use only in outdoor environment! However, when staining, the ammoniac evaporized faster than the stain was drying up. The stain left no other odor than... well, a faint hint of Westmorland!

6) After the last round I gave the pipe three coats of stain and then the final polish at 2500 grits. The pipe became glossy and nice!

7) Then I polished the pipe by hand with a woolcloth and a tiny bit of Brab's Briar Polish wax.
I'm in no way a wood-worker or a pipe-carver. I just wanted to have a tobacco-stained pipe and now I have it. My pipe is beautifully stained. It doesn't smell ammonia, doesn't stain my hands and doesn't change colour when hot.

A beautiful result, I must say.
After this successful experiment I'm thinking of re-finishing some of my cheaper dedicated pipes. For example, it would be really nice to have a flake pipe stained with Full Virginia Flake or University Flake. Or a Latakia pipe, stained with Commonwealth or Old Dublin (I have no idea if the colours would be different, but that's what I'm eager to check now).
Hopefully this short report could be useful for those who want to stain their pipes with natural tobacco colour.

That came out really nice! I had never considered tobacco as a source of stain, but why not?

A few years ago I removed the lacquer finish from a Rattray's bulldog, using only sandpaper (I forget the details).

Lacking any stain, or clever ideas for a substitute, I "refinished" the bare pipe with carnauba wax only.

Over time the color became deeper and richer just from usage. Here's a couple of pix. It turns out the manufacturer used a dark stain and glossy lacquer finish to conceal some minor fills -- along with some pretty nice grain.

Factory finishes are highly over-rated. A natural briar will take on a patina and character all its own, one that can't be duplicated on a production line.

Nice natural finish, Cortez. This kind of natural briar finish is what I like the most.

Maybe it's time to buy a buffing wheel to use carnauba on my pipes.
The opaque lacquer finish on Fermoy was hiding 2 microscopic sandpits... and a beautiful birdseye grain. I don't get their point in their choice of finish, the pipe looks way better unlacquered.
P.S. Oops, just noticed my typo:

One part tobacco to ten parts 5% ammonia, that's what I meant. 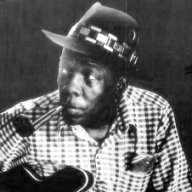 The outer green hull of a walnut, which comes off to reveal the actual walnut, makes a nice dark stain after they begin to break down. Never used it on a pipe but looks very nice on wood.

I clicked on the photo to get a larger picture, and wow! That really is lovely. Well done! :clap:
Edit to add: Which reminds me... I've been thinking of using coffee to stain a pipe with, and I'm wondering if anyone else has ever tried this or seen it done.

Green walnut hulls and coffee seem to be proper natural ingredients for making pipe stain (especially walnut, which gives a strong and long-lasting colour hard to wash off hands). Perhaps black tea, used generously, will do as well.

I'm thinking of trying them all on my cheaper pipes.

If ammonia can extract a lot of pigment from tobacco (and it can, as my experiment suggests) then why not from other vegetable materials... It would be really nice to have a rack of pipes stained with natural colours of Tobacco, Tea, Coffee and Walnut.