I know that my collection is small compared to some but I'm pretty proud of it. I apologize for the bad pictures.
First up, my new Larrysson Blasted Prince thanks to Smokingpipes.com Next up my updated collection. From Left to right: 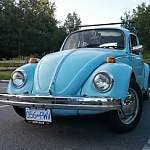 Very nice collection. I really like the look of the Bulldesian.

Very nice. You'll catch up in no time. :D

The Belge and the Bulldesian would fit nicely into my humble collection!
Congrats on all your pipes!
Thanks for sharing.

Thanks Guys. This has been about 10 years in the making. I bought the shalom in 2005, and have added a pipe here and there ever since. I have had many other pipes along the way such as Peterson, Savinelli, Nording, Ser Jacopo, Reiner and probably a few others. I have mostly gotten rid of pipes because I just wasn't attached to them and wanted to trade them to get something I liked better.
If you guys like the Bulldesian here is a link to SE Thile's website and the original posting of the pipe. I bought it at the Columbus Show last year. Scott is a heck of a guy and a very underrated pipe make imo.
http://www.sethilepipes.com/component/k2/5-preview-pipes/247

Some lovely looking pipes. The poker you made looks fantastic!

Love your new Larrysson, The stem on that one is just breathtaking.

Thanks for the link delkhouri. That Bulldesian is even better than I thought.

That prince is frigging amazing