I'm wondering if I should always use a match for lighting my pipes. I have a recent, and very small, billiard from Nording that is a work of art, but even with a match the rim is burnt. On my other pipes, especially the darker ones which I favor, there's no significant burning of the rim. So what do most pipe smokers use, a lighter (I use Zippos) or matches (which are a damned nuisance).

I mostly use Bic lighters but I also have a Zippo pipe lighter that I use.

I use matches if inside and a lighter for outside, but no real preference.

I have an old Savinelli lighter that I use on occasion if I smoke inside, but mostly I use a Zippo pipe lighter which is much more wind proof. I always seem to burn either my fingers or my pipe with matches. Should get my eyes checked I guess.... 8O

I use lighters also exclusively. Saskatchewan is pretty windy and I can never keep a match lit long enough for a light. I carry a Zippo, 3 bics, and a refillable $20 gas lighter.

I use a Zippo. I tend to taste a match (even after letting it burn for a few seconds) more than I can taste the fluid in the lighter. But, of course a dozen people will counter me in opinion, so "oh well."
I just hold my lighter about half an inch above the pipe and draw the flame down with my puffing. I don't get near as much rim burn that way. Whereas, I have to hold a match closer because its not as hot to the tobacco, and this causes matches to burn my rims more.
I've read several opinions based on a blog a guy did that says that the temperature of the lighter verses a match gives the tobacco less taste and more tongue bite, yaddy yaddy. After the initial light, tamp, light, the tobacco won't continue to burn as hot as a lighter or as cool as a match. Simple chemistry can explain that the tobacco once left to incinerate won't continue to burn as hot as the catalyst. If this were so, if I lit my gas heater off of an ox-acetylene torch, my energy bill would go down. It just doesn't work that way.
My advice is to just not puff on the initial light too much, if you use a lighter. Just get it going, and let momentum take it from there.
I would use matches more if they worked worth a flip. I do like the way lighting a pipe with a match looks. It gives ya the Joe Cool look to firing it up 8)

My Zippo is for outdoors in the wind. A Bic lighter burns hotter and is an easy way to light a pipe. Wooden matches are good, paper matches are ok when there is no gas lighter available.

I go for the zippo. Tried matches with bad results (just can't get the damn thing lit). I do keep a supply of Djeep lighters around, and they work great too.

I'm from the match camp. In the beginning it was a pain to use matches, especially outside. But with practice, I developed a technique where I cup the bowl to protect the match. If the wind is really strong I will use a Bic, but other than that I like matches. I find I have better directional control of the flame when I use matches. But to each his own.

If I had a bunch of matches, I'd prob. use them, but I always end up running out. So I have xikar pipe lighter, zippo, and a couple other lighters I use most of the time. I definitely have better control of the flame with a match - but if I'm working on a particularly difficult or wet tobacco I find I'm relighting way too much to keep up with matches. Other times - 2-3 matches is all it takes, but on average I never have enough matches.

what every is handy and in my pocket, only thing i won't use is a torch lighter---- too hot for me

Ditto on the Zippo pipe lighter.

I use matches when weather permits (flame is easier to control IMO), otherwise I use a lighter. I was using Bics, but I found that I can't seem to get an even light with them. It's probably a technique thing, because the more concentrated flame just seems to scorch the tobacco right down the middle (even when I deliberately try to light all the way around the bowl).
Since the Zippo fluid hasn't really been bothering me (YMMV), I decided to switch to a Zippo pipe lighter rather than try to figure out how to use a Bic properly in 30km/hr winds. 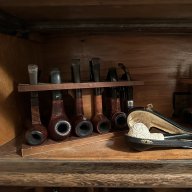 I use matches 100% of the time. Wooden matches, never paper.
If you're burning the rim with matches, though, I would encourage you to take a look at your technique. Once the head burns off, get as much of a charring light as you can immediately, then move the match away. Puff a bit, then bring the match back to the bowl, holding it high enough to keep it off the rim of the bowl but close enough to be able to pull down the flame.
If you want to stick with matches, you might also want to look into getting some cigar matches, which are about 2-3 inches long. Or even boxed kitchen matches can be helpful. I use these for the charring light and then pull out a small box of matches only if I need to relight down the bowl.
Bob

I used to use matches indoors and an angled jet outside, but now I really just use the jet. I find I have much more control over the direction of the heat, saving my rim, and if you just run the end of the (lowest) flame across the tobacco then it doesn't nuke the stuff. I tried a Bic and still have the scars to prove it. By the time I've worked out which way is up my fingers are alight while the pipe stays cold. Ho hum.
Andy

I also only use matches, super cheap and you can easily reach inside the bowl without burning it.

Wood matches are primary for me. I do have a pipe lighter and carry it with me when outdoors. 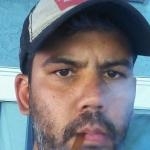 Standard zippo lighter nearly always. If not that, a bic. Matches are a pain in the arse for me to use, and my rims don't get burnt because they're covered with cake!

A mixture of both for me.
From the false light to about half the bowl, I'll use my zippo. But once I get below half the bowl, I seem to have trouble drawing in enough flame from the zippo to keep the tobacco lit, so I'll switch to using matches.