I've always been a bit confused by this; a K&P is a Peterson, but not necessarily the other way around. Were Peterson pipes sold as K&P before a certain date? Or is K&P a sub brand?

Have I stumped you guys?

Site was down for about a billion hours. I have no idea, I always just assumed it was the same brand, just an alternate stamp.

I have a K&P author, and I always assumed it was a series within the Peterson brand, not a sub-brand or separate brand.

I'm not stumped. If I wanted the answer I'd query Peterson for the definitive answer. I'm just not interested enough to do so.
Reactions: Merton
J

The original name of the company was Knapp and Peterson. Eventually, it became just Peterson, but the K&P trademark was already establish and I believe has been in continuous use. Just from personal observation, it seems that all silver is stamped K&P
Reactions: supperthyme and hauntedmyst

jojoc said:
The original name of the company was Knapp and Peterson. Eventually, it became just Peterson, but the K&P trademark was already establish and I believe has been in continuous use. Just from personal observation, it seems that all silver is stamped K&P
Click to expand...

Interesting point that the silver is stamped K&P. I have a hallmarked 1950 K&P, but a 2015 Christmas pipe that just says 2015, I guess that's just polished metal and not silver?
J

mikethompson said:
Interesting point that the silver is stamped K&P. I have a hallmarked 1950 K&P, but a 2015 Christmas pipe that just says 2015, I guess that's just polished metal and not silver?
Click to expand...

Please don't take my comment about silver too seriously. It is just my own observation. I could be completely wrong. And if I am right, there are always exceptions to the general rule. It is not uncommon for inconsistent stamping from Peterson. For example, I have a Peterson Killarney pipe stamped "MADE IN IRELAND", which would "date" it to the early 1900's. However, I purchased it new in the 1990's.
My point really was that the "K&P" is a trademark of Peterson Pipes that has been used for many years and is still in use today.
Reactions: jpmcwjr

My K&P has a fine nickel band, not silver.
Reactions: mtwaller
J

Dangers of going from memory - thanks for the correction.
Reactions: jpberg

Well I've emailed Peterson directly to clear this all up. I will post their response when/if I get it.

The original name of the company was Kapp Brothers. When Peterson joined. It became Kapp & Peterson, K&P for short. Peterson eventually bought the Kapp brothers out. It stlll used the K&P name. Present day, under the Luadisi (sp) Group, it's officially Peterson. They will still use the K&P branding for more 'traditional/old school lines'. Thats' my understanding, anyway.
Reactions: jpmcwjr 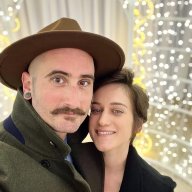 A lot of the nickel band Peterson’s I’ve seen are stamped simply “K&P”, whereas the silver bands are a bit more involved. I’ve never personally had a silver band stamped with “K&P”. I don’t believe it’s a separate brand, but could be wrong.
Reactions: jpmcwjr

There is no difference in the branding of these two stamps used on Peterson pipes.
The K&P stamp came into use first and has been used on our pipes from the beginning when the company was founded. This stamp is used on pipes that are well established and that have been around a long time. It is not a sub-brand.
The Peterson stamp came into use afterwards.

So it sounds like it is just an ornamental stamping used on traditional shapes or styles.
Reactions: vates and tobefrank

Eamon's answer from Peterson is spot on, of course. The company name is (and has been for a very long time) Kapp & Peterson, Ltd. and the pipes have been variously branded Peterson, Peterson's, Kapp & Peterson and K&P. It doesn't really signify. The stamps on pipes these days are all some variation on "Peterson", "Peterson's" and "Peterson of Dublin", but nickel bands usually sport the K&P device.
Reactions: mtwaller

Mark Irwin did reply, adding a bit more to Eamon's reply (who doesn't love that name!)

“For the price of 3 tins of good tobacco, all your questions can be definitively answered in The Peterson Pipe: The Story of Kapp & Peterson. In a nutshell, the “K&P” stamp is the original assayer’s maker’s mark for the Goldsmiths of Dublin assayers office, and has appeared on all nickel domed ferrules since Day 1. It has also appeared on bowl stamps, notably Irish army mount lines. It was even the name of its own line at one point. The company went through several name changes, but Kapp & Peterson was the name from 1893-1971. It then underwent more name changes, becoming Peterson of Dublin in 1991. Its employees refer to it as “Kapps,” not Peterson’s.
Reactions: vates and jpmcwjr
J

ssjones said:
Its employees refer to it as “Kapps,” not Peterson’s.
Click to expand...

That is very interesting!
Reactions: jpmcwjr