I Want to Thank Kashmir for Great Advice 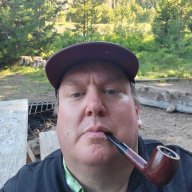 On another post Kashmir suggested that new pipe smokers clench their pipes. I decided to try this, and was able to smoke a bowl down to the mythical ash that I keep reading about. I have also really cut down on the number of relights that it takes to finish a pipe. It i amazing how well this little technique helped. Kashmir, I salute you.
Actually there are many on here I need to salute because I have learned so much.

jndyer, that is great that you have had some success clenching. Kashmir is definitely a wealth of great info, he has been smoking a pipe for decades and he is always very willing to share his experience. Now if I could only find out where he lives so I could relieve him of those Blue Ribands of his. :nana: Those things are amazing.

I benefited from this advice as well, so thanks kashmir and thanks jndyer for getting him to post this.

Thanks guys. I'll copy & paste what I said on the other thread here, because if someone stumbles upon this thread in a year or two's time, absent of the other thread, it'll hardly make sense: It's a pretty controversial topic, because I know a lot of pipemen do not clench. And there probably as many ways to enjoy a pipe, as there are pipesmokers. But I've found that for a lot of folks new to the pipe, a great many of them either fail to find a taste in the blend, or worse yet end up damaging the sensitive tissues of the mouth, palet and tongue to hot tobacco smoke. Also, tobacco that hasn't been allowed to dry out properly, or blends with a lot of PEG humectant like many OTC Aros burn hot to begin with, and newbies will often give up thinking pipe smoking is a masochistic practice. Like I said before, pain is not part of the game, and is not part of the learning curve. I think a lot of folks give up the pipe, or say I don't have the patience for this, because they're smoking too hot or too wet, which is the same thing. That's why I recommend clenching because its difficult or near impossible to clench a burning hot pipe. And if your releasing too much smoke why it'll burn your eyes too. Clenching forces you to slow down, and teaches you to nurse a smouldering ember. And that's where the flavor is at. It's also where safe piping begins. After your comfortable clenching then its easy to go to hand holding, because you've adapted yourself already to the proper slow cadence of smoking.

I've clenched since day one. I have always gotten great flavor and no bite out of blends. I guess I'll contribute it to this^^. It was natural for me, and it is unnatural to not clench, honestly.

I want to thank you too Kashmir, for I've been enriched with your thoughtful advice on more than one occasion,

you sir, are truly a philokapnismologist !
I wanted to c&p this bit from the other thread also, I find it to be quite elegant as well as accurate...
......................... kashmir said:
Well, this is a controversial topic, but for me I couldn't imagine smoking a pipe without clenching. Old school pipe smokers all clenched. You see this in old movies, and news clips from the era. Piping was a hands free operation. Men would pipe whilst typing, writing or reading. Hands free. Piping wasn't a "hobby" -it was a life style. Many men smoked from dawn to dusk and lived lives significantly longer than many do today.
Basically, after the first charing light and dicking around with the tamper a bit, the first and final light is lit. The pipe stays in the mouth more or less till it's done. To better grip the stem, and prevent chatter or tooth marks I use a bit protector. Not those big ugly rubber ones from China. Instead I cut my own thin rings out of surgical Tygon tubing. These little rings slide on the bit just behind the button, as your facing the opening. After piping and cleaning they slide off before the pipe is racked. Otherwise these things promote stem oxidation on vulcanite.
When you clench, your piping cadence develops naturally with your breath. You then sip for flavor. An added bonus is the pipe rarely goes out. Another bonus to clenching is that piping then becomes mindless, in the Zen sense of the word. And, for me, the less thought put into a smoke, why the more transcendent the smoke.
Yes indeedy, piping sure teaches a hell of a lot more than just how to smoke a pipe. I think clenching, snorking, and gently sipping to maintain a barely burning smoulder is key! And I'd venture a guess that clenchers have a far shorter learning curve than hand holders. And that's why I recommend it for beginners. When I see pipers billowing great clouds of smoke, like a locomotive, why I know their bowls are way too hot. And the gentle tobacco oils are being vaporized before the piper is able to taste them.
At least that how I see it.
Good stuff!

:clap:
...and a short vid of a clenching Robert Young in fine form.

I missed Kashmirs clenching post. Will try to find it.

Thanks guys.
Here's the link to the other thread instymp:
http://pipesmagazine.com/forums/topic/is-it-possible-to-not-be-able-to-taste-tobacco

I too was a natural clencher from day one and never had any issues, it just seemed normal to clench. I still have moments where I smoke too fast but I always recognize it straight away and am able to correct my cadence within a few sips. I am also an advocate of breathe smoking which comes quite naturally with clenching. Really good advice from Kashmir that I've never seen anyone else give, but it makes so much sense.

Ha! Thanks Mr. Lowercase. Crossfire is one of my favorites. Robert Young was outstanding as the cool, clear eyed detective, and that pipe clenched scene is one of the best. Attitude. They sure don't make em like they usta.

My favorite Kashmir piece is the Tobacco Touchstone thread. Well, it's either that or the comment he wrote on bacteriology in a Pease article.

Mr. Pease, once again, thanks for a great read. As an Assistant Professor of Microbiology, who is also an avid pipe smoker, I have long wondered what microbial processes are at work on the aging process of pipe tobacco. After doing some preliminary literature searches (pubmed at NCBI), I have come to the conclusion that much less is known about these processes in tobacco, than, say, microbial fermentations leading to other useful commercial products (e.g., those found in the food and beverage industries).
Apparently, as these tobaccos age prior to the canning process itself, a number of microbiological events occur, involving a range of distinct species of bacteria and fungi. This is because of high water levels, that drop during production, finally reaching their lowest states prior to canning. After canning, which is what your article is really about, these microbial processes continue, somewhat abated, and most surprisingly involve an entirely different population of microbes, one encompassing more fungi and less bacteria. After sealing, of course, the oxygen levels plummet, from 20% atmospheric to levels lower than 5% eventually, over time. This is due to the metabolic process of the populations of obligate aerobes that came in with the tobacco, and are most active in the presence of high levels of oxygen. Concomitantly, as the endogenous aerobic species that came in with the tobacco gradually give way to the emergence of at first facultative (~10-15% oxygen) and then obligate (less than 5% oxygen) anaerobic microbes. The biological processes that these microbes undergo (from obligate aerobes through to facultative and then eventually obligate anaerobes) result in the production of a number of different classes of volatile molecules.
As every schoolboy knows, organic molecules (hydrocarbons) are classified into four groups (sugars, proteins, nucleic acids and lipids). Interestingly, as the aging process proceeds, over years, the sugars become fully metabolized first by the aerobes early on, leaving primarily the latter three classes of molecules. The deamination (yielding organic acids) and decarboxylation (yielding volatile, smelly amines) of amino acids in the proteins and the conversion of the lipids into smaller, more volatile fatty acid chains, is what is primarily responsible for the “bouquet” upon opening the tobacco can. Presumably, during the smoking, it is the presence of these volatiles that lend the palate of the blend. The sugars that do remain, that were not accessible to the early degredation by the obligate aerobes, is what is going on with the sugar-rich Virginias. Apparently, the packing of the tobacco (plug verses loose) is what determines how much of this sugar is freely metabolized early on. To me, it would seem, a Virginia plug would retain more sugar than a loosely packed Virginia.
A good starting reference might be: Appl Environ Microbiol. 2007 Feb;73(3):825-37. Microbial community structure and dynamics of dark fire-cured tobacco fermentation. Di Giacomo M, Paolino M, Silvestro D, Vigliotta G, Imperi F, Visca P, Alifano P, Parente D. Source British American Tobacco Italia, via Cinthia, 80126 Naples, Italy.
Source: http://www.ncbi.nlm.nih.gov/pubmed/17142368
Anywhoo, a long winded report, but not one without some thought. Keep up the great blending and fine writing. You are appreciated!
May 19th, 2011 at 1:08 am
Click to expand...

good advice given by kash as always

Thanks Peck. Say, Harris, after you're done looting my Blue Ribands, make sure you pay Peck a visit for his JT Cooke collection. LOL! Don't think I've ever seen a finer collection of pipes.

Kashmir, I was actually going to hit you on the way home after visiting peck first, I figure I should start north then work my way down south. He does have a killer collection.