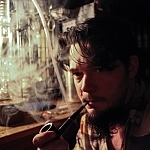 May 16, 2013 UPDATE
The plants really seem to have taken off since my last update, with lots of dense foliage and growth. I've taken the advice of tjameson above and rotated the plants, as well as spacing them so that I can water differently and they are doing much better. I also moved the light up another 1 1/2".
I examined the plants shortly after the last update, and noticed the problem with the weak stems extended into weak root systems. We are now watering from the bottom of the tray and letting the water soak up into the peat instead of misting directly onto the leaves, hopefully this will encourage the roots to stretch out into the "soil" more and strengthen the plant as a whole. Already I have noticed a difference in some of the plants (mostly the Broadleaf).
I have had pest problems, oddly enough. Houseflies seem to be drawn to the plants and a few leaves actually show evidence of being eaten. I now keep a flyswatter handy and have taken other measures to keep flies away.
I appreciate all the advice, and am keeping it all in mind during this "experiment". koscak, your plants look good. Have you considered supplementing the lack of natural sunlight with an artificial grow light for a few extra hours? Have you had any flowering yet?

I've thought about doing this for a while myself. I figured I could do sort of a trial run with limited space and grow maybe one or two plants. I think I'd go for some perique for blending but there is a pressure fermenting process that I'd have to try and learn.