So I've been following another thread about a Comoy pipe that may have been stamped "Command Commission" on it, and it got me thinking about an old GBD pipe I had in the 1980s. It was an interesting shape and stamped Command Commission 1979/80 on the bottom. It was kind of an odd shaped poker, and I can't seem to remember anything about it or why it was stamped like that. But I remembered the unusual shape and got to poking around on the internet, and found a pipe on Worthpoint that looks just like the one I had.

Here's the pic I grabbed from that site that is poor quality, but shows the shape of the pipe nicely. The shape is 9665, and shows up from time to time on ebay. Ok, now about the Kaywoodie connection. I knew I had a pipe shape that looked just like that, a Kaywoodie "Minerat", shape 103XL, Made in England. I can only assume that GBD made this pipe for Kaywoodie as it's not a common shape, as pictured here. Any one got any thoughts about this? Or am I all wet... :crazy:

Well, Cadogan has had the English Kaywoodie rights for sometime. So....

By George, I think you nailed it!
The English made Kaywoodies were made by Oppenheimer, who also controlled GBD.
Those two shape sure look similar. I agree, GBD had to make that KW. Here's an interesting ad from the mid 70's, it shows that similar shape as a 1837. 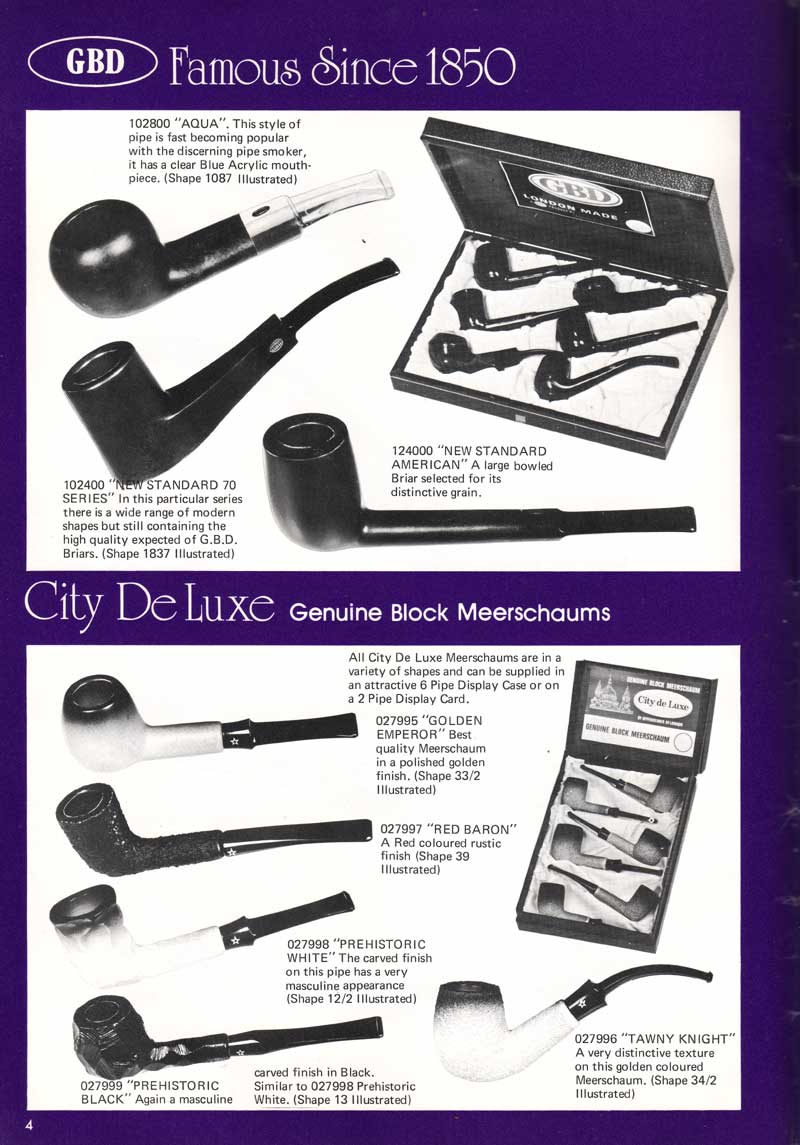 From a page on Chris Keene's site:

English Kaywoodies. All of the catalogs reviewed in this research contained the following copyright notification: Printed in U.S.A., Kaufmann Bros. and Bondy, Inc., New York and London. Kaywoodie Pipe cases and smoker's accessories were also marked with "New York and London". The catalogs, however, do not present any information concerning Kaywoodie's London operations, or how the English Kaywoodies might have differed from those manufactured and marketed in the U.S. Lowndes notes that he has several English Kaywoodies acquired in Vaduz and Zurich. English Kaywoodies are now made by Oppenheimer pipes. Lowndes notes that English Kaywoodies with the "screw-in bit" come in Ruby Grain, Custom Grain, Standard, and Relief Grain grades. The traditional push-bit models come in Continental Plain and Relief, London Made, Minaret, Airway Polished No. 707, and Lightweight grades. Prices in 1985 ranged from 9.50 (pounds) to 26.00 (pounds). Lowndes notes that the Super Star was a special edition English Kaywoodie made of finest briar with a handmade silver band. Lowndes has two: one from Zurich with a large white-outlined logo, and beautifully cased; and one in walnut finish with the black-­in-white logo. A recent catalog shows the Super Star without a band and the ordinary small white logo. A 1985 letter from Oppenheimer states that the black-in-white logo has been discontinued and only the regular white logo is now used.
Click to expand...

Great info Al, thanks! That 1837 shape looks just like it with a little different profile on the saddle bit.

My Kaywoodie is one of my favorite smokers, partly because it has a push tenon, and no stinger. A very comfortable pipe to hold too.

I still don't know what the Command Commission means on the GBD, but I do remember buying it from a Tinder Box store, so maybe it has something to do with them.

I sold it a long time ago, and still can't remember why....

The GBD factory in St. Claude made pipes for a wide range of other brands. Codogan was the controlling organization and was committed to optimize production. GBD as brand was independent but the facilities and production of pipes and stummels was manage through Codogan. It's rumored that GBD's factory actually produced stummels for Dunhill in the late seventies. It's also true that certain style numbers in the GBD line often appear in a number of "private label" products. More accurately stated, the St. Claude factory produced pipes for GBD and for a number of other labels as well.